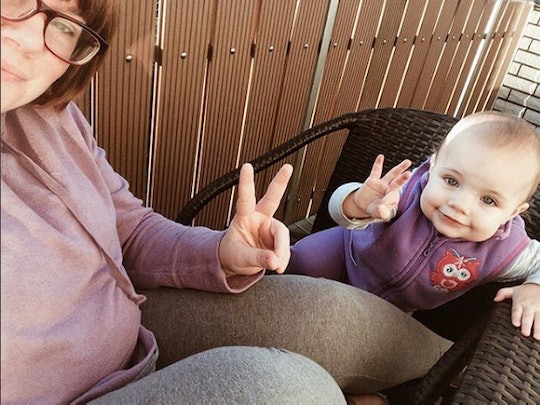 My Baby Self-Weaned & It Almost Broke My Heart

On the night I knew my daughter was self-weaning, which will henceforth be referred to as the “No More Mama Milk” night, my reaction took me completely by surprise. I didn’t have a set time to stop breastfeeding, but I also didn’t expect my baby to self-wean at 14 months. The approach I’ve taken so far to my daughter’s timing in terms of hitting milestones and growing up has been laid back — open to taking her cues, following my instincts, and trusting our bond when it comes to what she needs or doesn’t need. In fact, even before I got pregnant with her, I made up my mind that I didn’t want to get sad or over emotional when my kid reaches a new stage in life, because celebrating my child’s growth instead of lamenting her gradual independence is an important part of my parenting philosophy. So, that’s why I never expected that after my daughter skipped her nightly nursing session one night — and thereby took the lead on her start to giving up breastfeeding — that I’d have a gut-wrenching cry over it. I didn’t understand in the moment why it affected me so much when I'd previously been so accepting of her eagerness to “grow up” in the past, like when she starting crawling or when she started walking.

On the “No More Mama Milk” night, she latched, barely suckled, and then bit down on my nipple. She'd been biting me more regularly in the week leading up to this. By this point, she only breastfed in the evenings as she fell asleep. But I wasn't ready for it to be over completely.

“No,” I said calmly but sternly. “Let go,” I added while putting my finger in between her teeth to pry her from the death grip she had on my boob. But she didn’t let go for several more seconds.

I motioned for him to takeover and whispered in dismay, “She just wants to go to sleep,” as I muffled my own deep sob while I turned away a few feet from her crib.

“No, you don’t do that!” I said louder. She burst out crying from our interaction. I switched breasts, but she was inconsolable. She wouldn’t latch again. I tried holding her close to me and rocking her, but she continued to cry and wiggled like she wanted her own space. Knowing that she was tired, I laid her in her crib. She immediately assumed her favorite sleeping position, which is on her side, and began sucking her thumb like she does every night. My husband had come nearby as he heard the abnormal commotion between us. I motioned for him to takeover and whispered in dismay, “She just wants to go to sleep,” as I muffled my own deep sob while I turned away a few feet from her crib.

I was so used to breastfeeding her to sleep — I'd done it for roughly 426 days — while I sang a lullaby I'd made up that when I realized she was going to be able to fall asleep without me, I felt a strong rejection. Somewhere in my heart, I told myself, This isn’t just about you. Turning back towards the crib I said to my husband, “I’m still going to sing to her.” We both stood there as I rubbed her back and sang the familiar song. Afterwards, we crept out of the room, shut the door, and she was asleep. It was like nothing had happened.

Each night for almost a week, when I offered her my breast, my daughter literally turned her head away and voiced a somewhat verbal "nuh uh" — that sound every parent knows is their child figuring out how to say no.

I came away from that experience thinking, What just happened? Surely she isn’t ready to stop breastfeeding. It was our nightly ritual. I figured it would stay like that for a little while longer, even though I recognized she was drinking such a small amount each night. As a mother, it just feels amazing to be able to put your child asleep in such a tender, intimate way. I felt like I was continuing to give my baby that special “mama milk” health, too, which often put me at ease about her nutrition. I think it’s easy to feel such an attachment to breastfeeding as a mom, because for so many months, that breast milk is literally the one thing that sustained my daughter. I decided the “No More Mama Milk” night could have just been a one-off like a random nursing strike. And so, I tried again the next night. And the next. And the next. And the next.

Each night for almost a week, when I offered her my breast, my daughter literally turned her head away and voiced a somewhat verbal "nuh uh" — that sound every parent knows is their child figuring out how to say no. So instead, I cuddled her close, she sucked her thumb, and I rocked her while I sang her lullaby. It changed the way she fell asleep. Those nights in the weeks after the “No More Mama Milk” night, it seemed she needed more cuddles to make up for the nursing closeness to finally go off to sleep. She’d stand up in her crib two or three times after being laid down crying for us. I'd still try offering her breast milk — even random times during the day when it seemed she noticed my breasts — but she never again took it.

I assume that because it was such a small amount she was taking in before she stopped nursing, my breasts never became engorged. After a few weeks, I also assumed my milk had dried up, as I could no longer see any coming out when I tried to hand express. It was sort of a mysterious yet miraculous-to-me ending to something so amazing that my body can do.

When she stopped breastfeeding, it felt like I didn’t get the chance to mutually agree it was time to stop.

I now realize that the process of my daughter weaning herself affected me so much more than her other moments of growing up, because breastfeeding was a mutual exchange between the two of us, unlike her newfound development abilities. When she stopped breastfeeding, it felt like I didn’t get the chance to mutually agree it was time to stop. But the truth is, once I chose to see the beauty in her freedom to say no, I realized the brilliance of our mother-daughter bond is not based on how she needs me but rather how we learn to let go.