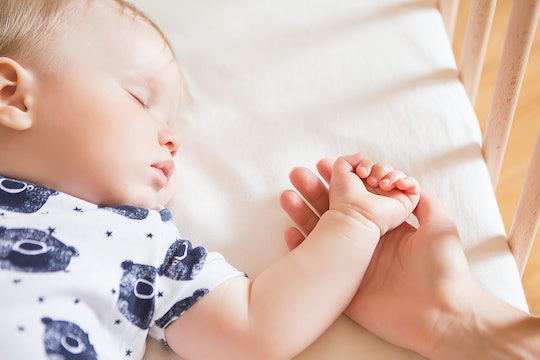 My Baby Stopped Co-Sleeping Before I Was Ready

In the parenting circles I run in (vaguely hippie-ish, somewhat crunchy), whether or not a family chooses to co-sleep is always a discussion. Some parents are adamant that co-sleeping is what’s best for a young child, others question the safety of co-sleeping, and/or feel that it just doesn’t quite work for them. It’s an issue on which there is room for a pretty wide variety of opinions, but most seem to be pretty clearly on one side of the fence or other other. I've learned that you’re either a co-sleeping family, or you just aren’t. But my own experience with my little family of three was completely different. It turned out that co-sleeping worked extremely well for us (or, at least for our baby) until suddenly, it didn’t work at all anymore. And as a mom, I had to deal with the fact that my baby stopped co-sleeping before I was ready. Processing my own feelings on that and admitting I wasn’t ready for that change, even though my child absolutely was, was really hard on me.

Prior to actually having a child of my own, I smugly thought that a pretty wide variety of approaches could work equally well, just so long as the parents were consistent. I imagined, from my high and mighty childless perch, that consistency was the key, and that it would be possible to maintain a consistent approach in the first place. What I failed to account for though, is how very quickly babies develop, and how much change accompanies that development. As much as a child might benefit from a consistent schedule or consistent caregivers, ultimately, when my child’s needs changed, it was more important to adapt to his needs than to stick to the plan.

My wife and I actually waffled on the co-sleeping issue from the start. Before his birth I thought that co-sleeping with a very little baby sounded cozy and nice, and my wife feared that once we let him into our bed, we’d never be able to get him out. After he was born, I found that I couldn’t sleep at all if he was in bed with us because I was just too light of a sleeper and too obsessed with checking on him. My wife, however, was away from him during the day, and didn’t really want to put him down in his crib all the way across the room. Once he got a little bigger, we flip-flopped again. I found that co-sleeping made late-night breastfeeding easier on me, but my wife found that if the baby and I were cuddling with each other, she wasn’t cuddling with anyone, and she didn’t exactly love that.

While I tried to tell myself that it was all about convenience and practicality, in reality, co-sleeping was deeply emotional for me.

When our son was around 4 months old, we started co-sleeping consistently out of necessity. It had become the only way any of us got any sleep, and so we decided to just roll with it. And I started to see some of those benefits that my co-sleeping friends were always going on and on about. He really did seem to be getting more confidence and strength from the knowledge that he could reach out and touch his caregivers in the night. He was calmer and happier, and I was excited not to be going back and forth from the bed to the crib each night. In my mind, the switch was complete.

And while I tried to tell myself that it was all about convenience and practicality, in reality, co-sleeping was deeply emotional for me. I've wanted to be a mother for almost as long as I can remember, and yet I didn’t have my child until I was almost 30, and in all likelihood, he’ll be my only baby. Cuddling with him in the night, listening to the sound of him breathing, watching his eyelids flutter as he dreamed, — these were all ways that I could cherish his babyhood. After a nasty, hard, blur of a postpartum experience, I needed a little time to just cherish my sweet little baby, and cherish my own role as his mother.

He slept in the crook of my arm, and I learned how to sleep around him. When he slept in his crib, he woke me up by crying loud enough to get my attention. But when he was sleeping in our bed, we woke up to a joy-filled baby every morning, who would roll over and grab my arm and giggle and coo until the whole family was laughing and smiling. I embraced the concept of the “family bed” and my child grew bigger and stronger. He learned how to crawl and he started climbing over our sleepy bodies first thing in the morning. It was adorable and hilarious. It was also the beginning of the end.

But at 9 months old, it became nearly impossible for him to sleep in our big bed. He just wasn't staying down. It just wasn't working anymore.

But at 9 months old, it became nearly impossible for him to sleep in our big bed. He just wasn't staying down. It just wasn't working anymore. I didn’t want to admit this was what was actually happening, so I swore that he was just going through a rough patch. He was just teething. It was just something. We would get back to normal. But I was dead wrong, and eventually I had to admit that and do the kind thing, which meant moving him to his own crib. While many, many children happily co-sleep into the toddler years (and even beyond), it just wasn’t working for him.

It still broke me. I still wasn’t ready. I wanted to cuddle him for just a little bit longer, to hold onto and stretch out the moment of his childhood when he could sleep so peacefully in the crook of my arm.

What would have, months before, been one or two night wakings for a quick feed, became an ordeal that happened every two hours… then every hour… and then every half an hour. Whereas waking up and finding me right there next to him once seemed to be a comfort to him, suddenly now it was a distraction. He wanted to either play or nurse, or sometimes both things, which resulted in him being up most of the night, and also throwing up because he had actually had too much milk. It was obvious that it was over, so my wife and I formulated a plan to move him to his own crib, and it worked better than we could have ever imagined.

But it still broke me. I still wasn’t ready. I wanted to cuddle him for just a little bit longer, to hold onto and stretch out the moment of his childhood when he could sleep so peacefully in the crook of my arm. And while not every parent goes through that co-sleeping flip-flop, that feeling of not being ready for your child to move on is very nearly universal. And I’m sure it’s an experience that I will go through again and again, but for me, this was the very first time.

I cried when he started sleeping soundly and peacefully without me, just like I’ll probably cry when he starts kindergarten, and when he moves out of my home one day. It can be hard and painful to watch your kids grow up, even in small ways. But I think that it is a good pain, the kind of growing pain that means we’re on the right path. We co-slept when we did because it helped our son to feel more secure and confident. Ultimately, he was secure and confident enough to need a little more independence, and as scary as that was for me, it was kind of the goal. He just reached it before I was ready.

More Like This
The Covid Vaccine For Kids Under 5 Has Been Sent To The FDA For Review
Here's Why Wearing Long Sleeves In The Summer Can Be Good For Your Baby
Should You Swaddle Your Baby In The Summer? Here’s How To Dress Them
How To Breastfeed A Baby With A Cleft Lip Or Cleft Palate