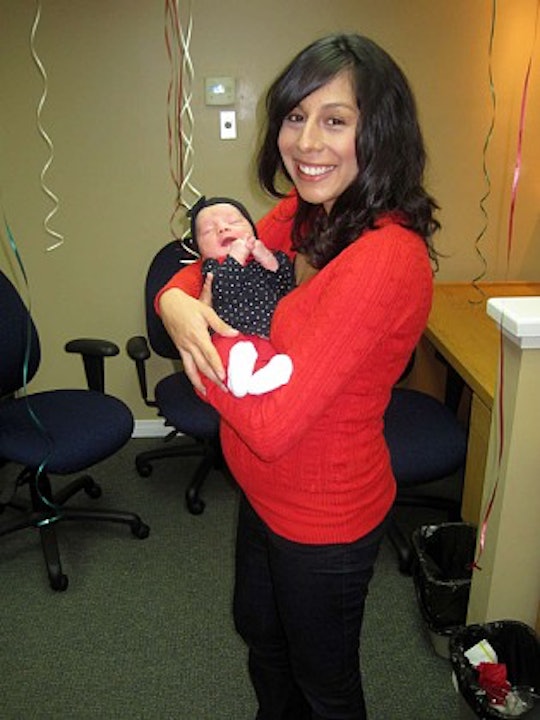 My Baby Was Born Using Forceps

Once your water breaks, you have lots of questions and very few answers. Will your contractions intensify, or will it take them hours to build? Will the baby be here within the hour, or will it take several hours? Will my birth plan roll out as anticipated, or will everything go another way? So, when my doctor broke the news that my daughter was facing the wrong way and was not coming down the birth canal on her own, I sorta anticipated everything I had written down in my birth plan would be thrown out the window. Although I wanted her to emerge from the birth canal as "naturally" as possible, my baby was born using forceps, and this is what it was like.

When I was admitted to the hospital after my water broke the morning of Thanksgiving Day, I'd hoped my labor would progress on its own. Instead, the doctor told me that labor was not progressing as quickly as she would have liked and that she intended to help turn my daughter using forceps while I pushed.

By this point, I had had an epidural and the nurses had administered Pitocin, a hormone that induces rapid uterine contractions. I had been pushing when the nurse told me to. It was not until my husband told me that the doctor was using forceps that I was even aware that she had already started trying to turn my daughter and lead her out. I didn’t feel a thing.

When the doctor told us she planned to use forceps to help turn my daughter and move through the birth canal, my husband and I weren't too worried. After all, every element of childbirth is associated with some level of risk: with an epidural, for instance, you run the risk of having elevated blood pressure. I knew that when forceps are used during childbirth, there's a risk that they could cause genital tearing or create temporary, minor marks on the baby's face.

Undergoing major surgery was never part of my birth plan. But then, all of a sudden, it was.

But these were risks I was willing to take. After all, I had had an epidural, I'd consented for the nurses to administer Pitocin, and my delivery was still not progressing. I could have refused the use of forceps, but I knew after taking Lamaze and childbirth classes that that wouldn't have necessarily been the best idea. I just wanted this baby out of me.

The forceps looked like really large salad tongs, only instead of grabbing lettuce and tomatoes, the forceps grasped the baby’s head. Every time I alerted the nurse that a contraction was coming, she would grab one of my legs and my husband would grab the other. The doctor instructed me to push while she used the forceps to turn and guide my daughter down the birth canal.

Unfortunately, not even forceps could persuade my daughter to hurry up and get out. After several tries, the doctor explained that an emergency c-section was required. I was terrified, as undergoing major surgery was never part of my birth plan. But then, all of a sudden, it was.

When my daughter was born via c-section, the only signs that forceps were used during delivery were the little dry patches of skin on her scalp. Luckily, she wasn't born with a slightly cone-shaped head (another possible result of being born using forceps, according to the American Pregnancy Association). The top of her head was pink with patches of dry skin, and some areas looked raw near the areas where the forceps connected with her head, but beyond that she was perfectly healthy.

I never anticipated a forceps-assisted delivery (or, for that matter, an emergency c-section), but I’m glad I was at least familiar with the device and aware of the reasons why they might have been required before I gave birth. Above all else, though, I'm glad my daughter was born happy and healthy.