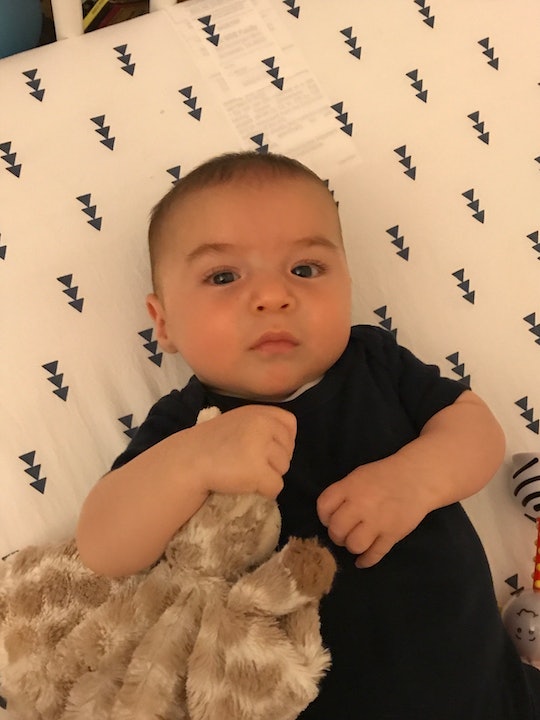 My Baby Was Size-Shamed, & I Almost Slapped Someone

There are certain things that people in polite society never ask each other about: their weight, their age, the color and frequency of their bowel movements. And yet, when you're a parent, people feel totally comfortable asking all of those questions about your baby. I recently learned this firsthand, when my baby was size-shamed by a gaggle of moms. And while I wasn't offended by it at the time, when I think about it in retrospect, I get so angry that if I had a time machine, I would go back in time, pull out a white glove, and slap them medieval-style.

To a certain extent, it's fine; babies obviously can't feel shame the way adults do, so if someone asks how much my kid weighs, it's not going to send him down a lengthy shame spiral that culminates with him hoarding SlimFasts and scrolling through #fitspo posts on Instagram.

And yet, often these questions aren't totally innocuous. No matter how much your baby weighs, eats, sleeps, or sh*ts, the person asking the question is very likely going to judge you for your answer, particularly if they are a parent. Because here's what no one tells you about parenting: not only do parents judge each other, but they judge each other's babies. A lot. And recently, my 5-month-old baby was judged.

The incident in question took place at a neighborhood singalong in Fort Greene, Brooklyn, on May 26, 2017, at 4:00 p.m. (I know this because I have photos from the event that are time-stamped, because apparently my iPhone knows how petty I am.) I was off from work, so I had the rare opportunity to take my 5-month-old son Sol to one of the weekly children's singalongs they hold at a neighborhood store.

Usually, our nanny (yes, I know we're incredibly privileged, but my husband and I both work, and there are no non-prohibitively expensive day care centers in our neighborhood so here we are) takes him, and she always comes back to tell us about the ludicrous names the Brooklyn moms give their kids, so I was excited to meet little Soldier and Wildrose and Ottoman firsthand.

You know that *record scratch* *freeze frame* meme? That's what was going on in my head when she said that.

Soldier and Wildrose and Ottoman were not in attendance, but there were a few other regulars and their moms. I don't have many other mom friends (I'm 27 and the first person in my social circle to have a child), so this was my first opportunity to interact with other moms. They were all willowy and clear-skinned and improbably pulling off paisley caftans with Converse sneakers, and immediately I was terrified of them.

"Has he been here before?" one of them asked, pointing to Sol.

"Yeah, he comes sometimes, but I work, so our nanny takes him," I said.

"Ohhhhhh," she said, exchanging knowing looks with her friend. "That's the preemie, right? Your nanny told us."

You know that *record scratch* *freeze frame* meme? That's what was going on in my head when she said that.

The mom was right — Sol was a preemie. He was born about a month before his due date, and weighed in at a little more than 6.5 pounds — not terrifyingly small, but slightly smaller than most babies who are born at full term. Because he was small, and because he was delivered via c-section, he struggled to breathe on his own, so he spent the first 24 hours of his life in the NICU.

I don't need other people to throw gasoline on the raging pit of flames that is the constant guilt burning in every parent's head.

At the time, I wasn't overly concerned about this, partially because my doctor was very, very good at reassuring me everything was OK and partially because I was too zonked out and obsessed with chasing my family members out of my hospital room to care. But as Sol got older and refused to latch, it started being a cause for concern. Our pediatrician informed us that because he was born a month earlier, he would be smaller and slower to hit his milestones than a baby born at full term, just because he needed time to catch up. So far, Sol is rapidly growing, and he's handily hitting his milestones, even without adjusting for his age. And yet, his premature status will have an effect on most aspects of his life, at least during the first year.

Because I am a parent, and because I am a naturally anxious person, it's hard for me not to feel personally responsible for that. Maybe if I hadn't taken antidepressants during my pregnancy, or had that glass of champagne (OK, two glasses of champagne) at our wedding, he would've been full-term. But I did, and he wasn't, and while I don't necessarily regret that, I don't need other people to throw gasoline on the raging pit of flames that is the constant guilt burning in every parent's head. And by pointing out how weirdly tiny my baby is — instead of pointing out the objective truth, which is how he is perfect-looking he is and should model — that's exactly what this mom was doing.

What I should've said to this lady was, "None of your business. F*ck you." Or, alternatively, what I should've said was, "Yes, and he almost DIED, and he was in the NICU for months, and we have to spoon-feed him 25 tiny baby pills and get him blessed by the Pope via Skype every day just to keep him alive, so thanks for reminding me of my baby's grave health issues, and f*ck you."

But I didn't say anything of those things. Instead, I said, "Yup," and she said, "Oh, OK," and we sat in silence for 40 minutes while a bearded guy with a banjo sang "How Far I'll Go" to our children. I was both incredibly bored and roiling with rage.

What the hell did they expect the answer to be? Because he was part-Lilliputian? Because we had a shrink ray in our basement? Because my baby was part of an elaborate optical illusion where it wasn't him who was too small, but them who were actually too big?

When I got home, I told our nanny what had happened. "Yeah, they asked me why he was so small, so I told them he was premature," she said.

"They...asked. Why. He was so small?" I repeated back. My ears were burning at this point. Barring a legitimate medical explanation, which was in itself rude and incredibly insensitive to ask about, what the hell did they expect the answer to be? Because he was Lilliputian? Because we had a shrink ray in our basement? Because my baby was part of an elaborate optical illusion where it wasn't him who was too small, but them who were actually too big, and then they'd look down at their feet and realize they were rapidly growing and start shrieking?

"Yup," she said. "Some people don't know how to keep their mouths shut." And that was that.

I have no idea why anyone would go out of their way to size-shame any baby, whether they're big or small, but ultimately, I think the only explanation is that: Some people just don't know how to keep their mouths shut. I also think that when you become a parent, other people's children automatically become the reference point against which you measure your own child. So when you ask "How much does that child weigh?" or "How was he born?" or "How are his poops?," you're also asking: "Is my child normal?"

It is a joy to watch him grow and change and absorb the world around him at his own pace. And if anyone else thinks that he's not doing any of that fast enough, then I have one thing to say: shut your mouth.

I'm not really interested in Sol's development being used as a standard against how other parents measure their own children's development. But I know it's going to happen anyway, and I know I'm probably going to obsess over how his size or weight or poop schedule stacks up against those of other kids, too. And if he falls short, I'll probably obsess over whether it was, somehow, my fault. But I also know is it is a joy to watch this tiny nugget, who I first met when he was bright blue and had tubes coming out of his orifices, become a little person. It is a joy to watch him smile, and lift his head up, and grab at his toys, and roll to his side, and giggle when I say, "No puppet. No puppet. You're the puppet" to him. It is a joy to watch him grow and change and absorb the world around him at his own pace. And if anyone else thinks that he's not doing any of that fast enough, or he's not adhering to their extremely well-informed medical opinions about child development, then I have one thing to say to them: shut your mouth. You're the puppet.

More Like This
Paris Hilton Is Officially A First-Time Mom
When Does A Baby Recognize Their Father? A Pediatrician Explains
Celebrate Your Baby’s 1st Valentine’s Day With These Instagram Captions
The Best Travel Tips For Solo Parenting
What Parents Are Talking About — Delivered Straight To Your Inbox