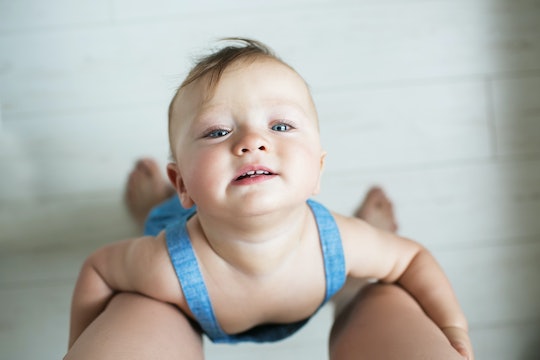 My Baby Went On A Nursing Strike, & Nearly Broke My Heart, But I Solved It

I never expected to love nursing my son so much. While I was pregnant, I was determined to breastfeed my child for as long as I could, although some aspects just seemed so unappealing: the idea of a tiny human gnawing on my nipples, the pressure of being the sole source of my baby’s nutrition, the fact that I’d likely be baring my breasts to strangers on occasion. Then, once we found our rhythm, nursing was one of the most rewarding, treasured parts of motherhood for me. I felt tremendous joy in knowing that my body, which struggled to get pregnant for three tumultuous years, could do this so easily. Even in those harrowing early days of engorged breasts and not-quite-right latches, when my nipples felt like they had been rasped by a cheese grater and tears streamed down my cheeks in agony, my little guy would look up at me with his innocent blue eyes, seeming to say, “Hang in there, Mama, we can do this.”

And indeed we did — until my baby went on a nursing strike at around five months old.

My husband and I had recently introduced solid foods at the recommendation of our pediatrician, who wanted to put some more bulk on our little guy. We were thrilled by how fast he’d slurp up those nifty packets of pureed fruits and veggies and loved the hilarious faces he made when trying new flavors.

I barely noticed the changes in his breastfeeding habits. Since he was doing so well with the solids, I didn’t think it was a big deal that he wasn’t nursing as much. One day, however, I realized he hadn’t nursed on my left side about a week — and then he began refusing the breast altogether.

I reached out to a licensed lactation consultant whose breastfeeding workshop I’d attended while pregnant. Her prognosis: a nursing strike, which she said is a “not uncommon phenomenon” when babies well under 12 months old refuse to nurse. She explained that a strike very rarely marks a baby starting to wean from breastfeeding; instead, several factors can be at play: a prolonged separation from the mother, a reduction in milk supply, or developmental milestones such as crawling. In our case, the cause was likely the introduction of solid foods.

Like so much else with becoming a new mother, I’d never even heard of a nursing strike before I was faced with one. I called a close friend, also a mom, to vent.

“What’s next — is he joining the baby union?” she joked.

We both laughed, but there was nothing funny about the situation. It had been hell in our household lately, my son and I in tears multiple times a day after each shortened nursing session (or his outright refusal), my husband concerned, as I was, about our baby’s nutrition (though, thankfully, he was still taking bottles of pumped milk) and my increasingly fragile state of mind. I was confused, devastated, and frustrated: at myself, at my doctor, and my husband, who, to his credit, tried to help but had no idea how. (“Can’t you just… make him do it?” he asked one night as our little guy squalled. I still don’t think he’s recovered from the look I gave him.)

But I was determined not to give up: Breastfeeding had been going so well, and I just wasn’t ready to let it go. I got well worth my $50 fee for a week of email advice from the lactation consultant as I barraged her with questions: Is this fixable? (yes, but it will take some patience); Why didn’t my pediatrician warn me about this? (many doctors aren’t well-versed in the nuances of breastfeeding); and, of course, What can I do to get things back on track?

She devised a “back-to-breast” strategy that focused on first re-establishing my diminished supply, which was a big part of the problem: a vicious cycle of my baby getting frustrated with the lower flow, refusing to nurse, and my supply continuing to drop. She suggesting renting a hospital-grade pump and using it about six times a day to kick things into high gear, as well as taking fenugreek, an herb that helps promote milk flow. I headed to Whole Foods that very day and bought two bottles, purposely bypassing the formula section. Soon thereafter, I picked up the pump, a beast of a machine whose heft belied its smooth, quiet rhythm. (The rental fee was a whopping $97 a month; so much for breastfeeding being budget-friendly.)

The lactation consultant also advised us to temporarily scale way back on the solid foods until we got the nursing figured out, and to feed him before a meal, not after (the opposite of what we’d been doing).

Finally, she reminded me to make sure that the breast was still a “happy place” for my baby. This was, by far, the most difficult part. How was I supposed to do that when, each time he pulled away or refused to nurse altogether, it felt like a stab in my heart? What’s more, I live in San Francisco, where, in the parenting community, breastfeeding — hell, anything that’s so-called "natural," damn the cost or sacrifice — is considered sacred. As if I didn’t feel bad enough on my own, I could almost sense the collective judgment the minute I would set foot in the formula aisle.

I forced a smile, keeping my gaze down as she nursed her daughter.

I hadn’t felt so frustrated and emotionally wrung out since the fog of the newborn days. One day, I left my son with his sitter to attend a new mothers’ circle, where I hoped to find some supportive souls. I tearfully described what I was going through, explaining how it all started with the seemingly innocuous milestone of starting our little guy on solids, how he’d just keep eating whatever we fed him.

“Like a dog!” joked the mom to my left as others broke out in giggles. I wanted to punch her. Instead, I forced a smile, keeping my gaze down as she nursed her daughter.

When the circle wrapped up, the group leader thanked me for sharing my experience, emphasizing how it would surely help others in the group who hadn’t started their babies on solids yet. I couldn’t help but take that personally, too, as if she was implying, “So, ladies, this is what NOT to do.”

Over the next few days, I stuck with our strategy, pumping several times a day and taking my 2400 milligrams of fenugreek. But our nursing sessions were still subpar — after a few minutes, my son would pull away. That weekend we had a close friend and her daughter visiting, and I told myself if things didn’t improve by the time they left, that would be it: We’d buy formula, and our breastfeeding days would be done. I couldn’t continue this frustrating cycle, and I sure as hell wasn’t up for the “worst-case scenario” that the lactation consultant had suggested: pumping and bottle-feeding for every feeding.

For the first time in weeks, my son nursed — on my lackluster left side, no less — for about 15 minutes before moving to the right for another 15.

That Saturday, the weather was beautiful, and we all piled into the car with the kids and headed to Napa for some wine tasting. We were among the only guests at our first winery and staked out a quiet corner on the patio. My little guy was hungry, so we nestled into a cushy chair and — in a flash of inspiration from our early nursing days — I adjusted him into a “football” hold parallel to my body.

I don’t know if it was the relaxed outdoor setting, the fact that I’d finally come to terms with buying formula, or the glass of wine in my hand, but for the first time in weeks, my son nursed — on my lackluster left side, no less — for about 15 minutes before moving to the right for another 15. I was ecstatic but tried not to get my hopes up.

Things continued to improve over the following days and weeks, and eventually we settled into our old rhythms. The strike was officially over. But I had a new appreciation for those precious, fleeting moments when I fed him. I developed a new routine: I turned the TV off, put my phone down, and put on some relaxing music, saying a silent prayer of gratitude for this gift of nurturing and bonding with my beautiful boy, which we shared for another six glorious months.