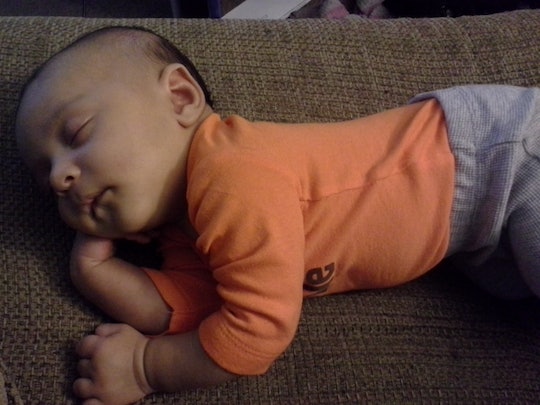 My Baby Would Only Sleep On His Tummy, & He Turned Out OK

For the first four weeks of his life, my son was a solid sleeper. He would be up approximately every two hours, and I could almost set my watch to his sleep schedule. But somewhere between four and six weeks, something changed. During the day, he was up all the time. When I could get him to sleep, it was usually for no longer than 20 minutes at a time. It was difficult to get things done because he wanted to be held and nursed all the time. I could barely do anything. I'd started wearing him so I could make dinner, but I was always afraid of accidentally burning him or spattering him with food. If I needed to pee or wash the dishes or sort the laundry, I could put him on his tummy, but I needed him to go to sleep.

Finally, around 10 weeks, I asked my mom for advice. “Why don’t you try putting him on his belly to sleep?," she asked.

I was aghast. Surely, she wasn’t serious. My pediatrician had told me that the American Academy of Pediatrics (AAP) recommended that babies sleep on their backs on a firm surface to reduce the risk of SIDS, and I had listened. I didn't want to put my baby's life at risk just so he could sleep for a little bit longer. But a part of me wondered if maybe we should give it a try. I could watch him and monitor him, and if it made me too anxious I could simply lay him the right way on his back.

Thanksgiving was coming and I was having people over, so I needed time to prep and get things ready. I figured that if I was careful and checked on my son frequently, he would probably be OK. So I gave it a try. When he was ready to go to sleep, I put him on his belly and made sure that there was nothing around him that could possibly suffocate him. I sat next to him for 20 minutes, which was usually the length of his naps. 30 minutes later, he was still asleep. He had rolled onto his side so his face wasn’t obstructed, and I felt OK enough about his safety to go get some food prep done. He stayed asleep for more than an hour in that position.

I carefully weighed the risks and the benefits before I made my decision.

I was amazed. I couldn't believe how long he had stayed asleep. For the next few weeks, I only let him sleep on his tummy during the day when I was awake, so I could check on him frequently. But eventually, it became clear that he preferred sleeping on his stomach at night. I had to swaddle him to get him to sleep on his back, and he hated that.

We slowly began transitioning to letting him sleep on his tummy at night. While he wasn’t sleeping for much longer, he was getting a deeper sleep, and he wasn’t waking up crying and fussy. I was happy to have more time to do chores during the day, but his safety was always my biggest concern. Usually, he'd go down on his belly and then roll over onto his side.

It actually made a lot of sense to me that he preferred sleeping on his belly and side: I've always been a side and tummy sleeper, as is my son's father, so I guess he was just predisposed that way. Even now, at almost 4 years old, he still spends most of the night asleep on his belly or on his side. If he’s on his back, it’s usually not for very long.

It was my decision for my child, and I know that it’s not right for everyone.

I know that putting a baby to sleep on his belly isn’t recommended by the AAP, and I want to be clear that I would not recommend that another parent do it. But I will say that I carefully weighed the risks and the benefits before I made my decision. I removed all blankets and pillows and made sure that he was always on a firm surface when he went to sleep, and that nothing was propping him up. I tried to reduce the risks as much as I could.

I know I’m lucky that my son turned out OK. It’s easy to simply say, “I put my son to sleep on his stomach, and it was fine” without acknowledging everything that could have possibly gone wrong, because there’s a reason why the AAP's guidelines are in place. All I can say is that I tried to listen to my own motherly instincts to determine what was right for my son. Research is important, and medical guidelines are important, but so is trusting your own instincts. And while I will defend my decision to put my son to sleep on his stomach, it was my decision for my child, and I know that it’s not right for everyone.