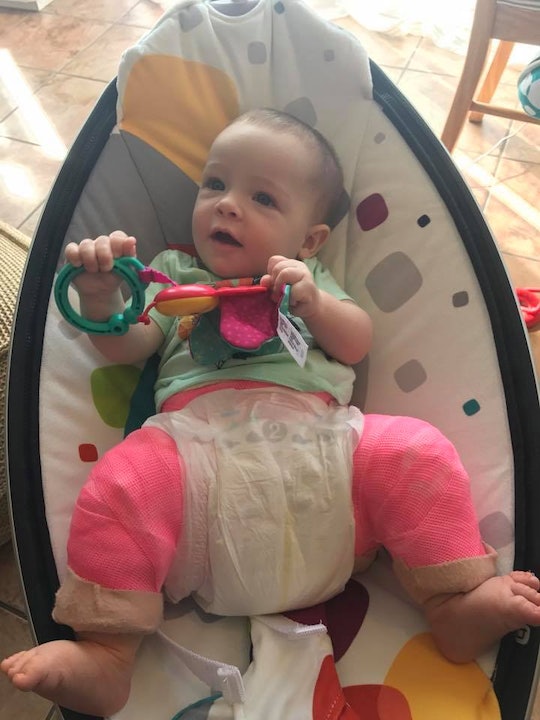 My Baby's Hip Dysplasia Was Terrifying

“Your daughter is healthy, but…,” the hospital pediatrician said, not even 24 hours after my daughter was born. “It appears that she may have hip dysplasia.”

“Like a dog?” I blurted out. The only time I’d ever heard of hip dysplasia before was when my parents bought our childhood dog. Before we'd brought the dog home, the breeder had guaranteed she wouldn't have hip dysplasia. I'd never heard of it with reference to a human being before.

The doctor explained that hip dysplasia referred to the misalignment of the bones of the hip joint, which prevents the hips from functioning properly. If it’s not treated, children can have hip pain and trouble walking; it can also result in osteoarthritis, as well as other bone disorders. According to the International Hip Dysplasia Institute, hip dysplasia is fairly rare (only approximately two to three children per 1000 have it), but it is most common in girls, breech babies, and multiples. Our daughter Abigail fell into only one of those categories.

As the doctor spoke, my husband and I listened as best we could, but it was tough. After all, we were still wrapping our head around the fact that Abigail had arrived after an arduous 14-hour labor. Now we had to deal with this news. My mind was racing with questions: What is hip dysplasia? How do we fix this? What about our insurance? And most importantly: would our baby be okay?

After Abigail was diagnosed with hip dysplasia, life continued as usual, until we met with a pediatric orthopedist two months later. Abigail’s hips were X-rayed and then the doctor performed a physical exam to confirm the diagnosis. My daughter cried the whole time, and so did I. We discussed Abigail's treatment to correct her dysplasia, which would start with putting Abigail in a Pavlik harness full-time for 6-12 weeks.

The Pavlik harness can best be described as a Velcro and cotton contraption that gently positions your child so the hips are aligned to the joint, allowing the hip socket to round around the bone. Abigail really didn’t seem to notice the Pavlik harness, and she continued newborn life as usual. But my husband and I weren't allowed to remove Abigail from the harness at all until her doctor gave us the OK. He said that once her hips stabilized into the correct position, we could remove it once a day for baths, but she'd have to wear it for a few months full-time first.

We followed the doctor's instructions and did not remove the harness. That meant no outfit changes, no baths (although we did sponge bathe her as best we could), and lots of caked-on, rancid spit up. The stench was disgusting, and any attempts to spot-clean didn’t help much. As for diaper changing, she did have one blow-out while we were on vacation. Our amazing friends came to the rescue to buy her a new outfit, change her, and keep me calm.

After a month, the doctor told us that the harness was not working for Abigail. It was time to try a different treatment option. He said that she would need to have surgery and spend three months in a spica cast, a plaster cast that covers both legs. The cast would keep Abigail’s hip in place, allowing for the hip socket to round so it could function properly.

To apply the cast, the doctor would need to place our daughter under anesthesia and manipulate her hips into place with surgery. Of course, my husband and I were incredibly nervous about this, and neither of us could sleep the night before. Surgery is a big deal for anyone, but this was our first child, our baby, and we were scared. We trusted our doctor and the hospital staff, but it was incredibly nerve-wracking letting her go into a room all by herself, without her parents to comfort her.

I awkwardly held her, not sure how to hold my now-wider, bulkier, and heavier baby.

Our 5-month old was wheeled into the operating room, unfazed by the fact that she hadn’t eaten in hours. She was as happy as could be. Then we waited. After a few hours, we met up with her as she woke up in recovery, bright pink spica cast and all.

I was anxious, tired, and worried. Would she be upset as long as she had the cast on? Or would she go back to being herself soon? My husband was finally able to get her to rest on his chest when we returned to her quiet hospital room, away from the busy recovery room.

Thanks to the cast, Abigail's new wide stance meant that she couldn’t fit in her car seat. The hospital loaned us one that was far too big, but it would do the job until the cast came off three months later. That first night, Abigail only slept in 12-minute spurts on our chests. My husband and I took shifts so that we could each get rest. Gradually, over the next few days she returned to her happy self.

The cast had a very small opening for us to diaper her, but Abigail's diapers didn’t really fit inside the cast. So I sought the advice of a mom I’d met in a Facebook group, whose son had also been in a spica cast. She suggested that we use incontinence pads, and then we put a larger diaper around the cast to keep it all in place. The new diapering system worked, but the cast absorbed all of the pee and poop, meaning that it constantly smelled terrible. We cleaned it as best we could, and even dotted lavender oil on it, but the scent still lingered.

Abigail's cast drew stares and comments from random strangers. Many people asked us if Abigail had broken any bones, and even more people asked, "Why is she in that?" While I found the questions irritating, sometimes people just stared at us, which drove me even crazier. Although it was difficult for us as parents to deal with Abigail's cast, Abigail continued baby life as usual, unfazed. She even figured out how to roll and Army crawl like a boss.

After three long months, it was time to remove the cast — but Abigail’s treatment wasn’t over yet. She moved onto wearing a hip abduction brace, which positioned her hips to allow the socket to continue to round over the bone. The brace allowed for her to move more freely than the cast did, but our doctor didn't give us a clear timeline on how long she’d have to wear it. It all depended on how fast or slow her hips grew.

Prior to the surgery, we'd been told that the brace might delay Abigail's mobility milestones. But Abigail is now 1 year old and she’s figured out how to stand up on her own into the best sumo squat you’ve sever een. She’s even taking supported steps along our furniture and her toy walker, but prefers to Army crawl crazy fast. Needless to say, I’m jealous of her core and arms.

We are now entering the sixth month of Abigail's brace being on full-time. I’m ready to be done, but it’s not up to me to make that call: it's up to the doctors. Eventually, hopefully soon, they'll decide she'll only need to wear it while sleeping.

My husband and I are grateful to have a resilient baby who is going places in life.

There are small things that I realize now that she couldn’t do that other kids or parents don’t think twice about. For instance, you know that cute moment when your baby discovers their toes and puts them straight in their mouth? That didn’t happen for us until Abigail was in her brace. I didn’t realize that I'd been waiting for that moment until it happened and I saw the joy in her face, I definitely teared up.

Nothing could have prepared us for dealing with hip dysplasia. We’re grateful for her doctor and the nurses at the children’s hospital. We’re more grateful for our friends and family for their support and helping take care of her so we could get out. And I’m grateful for the mom I found on Facebook who went through the same thing so I could ask questions, vent, or just compare notes.

I don’t know how much longer Abigail will have to wear a brace, full-time or part-time. I wish I knew the answer. But I can say that my husband and I are most grateful to have a resilient baby who is going places in life. Right now, she's destroying our entire house via sumo squats, but in the future, I know for a fact that she’ll take on the world.