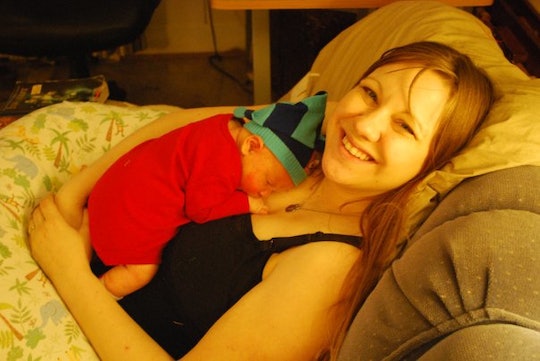 My Back Labor Almost Destroyed Me

My labor started out normally. I'd lost my mucus plug about two days before the contractions started, so we knew they were coming. And they started slow and easy. We went to Target. I gleefully told a man who asked when I was due that I was in labor. “You should be in a hospital!” he said, shocked. “Not going to a hospital,” I replied smugly, and stepped into the car my husband had pulled around for me. I was going to a birth center, with a midwife. No epidurals or IV hookups there! Instead, I’d have a tub and massage. What I didn’t know then was that in addition to the joys of labor, I'd have back labor to contend with, too.

According to the American Pregnancy Association (APA), back labor refers to “the pain and discomfort that laboring women will feel in their lower back … about a quarter of women report experiencing severe discomfort in the lower back that is most intense during contractions and often painful between contractions.” Basically, your lower back hurts like hot metal’s been wrapped around it. Also according to APA, research shows a baby in an undesirable position in the womb, which is the most common cause of back labor, is more likely to experience difficulty going through the birth canal. Little did we know that baby Blaise was sunny-side up, or posterior — something our midwife didn't catch — and my labor exhibit all the classic signs of a posterior delivery, including irregular contractions, a long labor, and a long pushing stage.

I was screaming during contractions (only every five minutes), and crying in between them. My back hurt so badly. The pain wasn’t in my belly, but in my back. And it hurt like you wouldn't believe.

But back home, I felt fine. I called my midwife to tell her that I was in labor, that my contractions were about 10 minutes apart, and that I felt fine. She told me to call her back when they hit three minutes apart. So I went to bed. When I woke up in the morning, my contractions were still normal and still widely spaced out. I got dressed and played a Sega Genesis emulator while they strengthened. By that night, my contractions were getting bad. I was in a good deal of pain during them, and posted on an internet forum that I didn’t know if I could hack an unmedicated birth anymore. About then, that's when the back labor started. My husband called the midwife and she insisted I come in. We met her at the birth center at about midnight with piles and piles of stuff: clothes for me and him and baby and cloth diapers and cameras.

By then, I was screaming during contractions (only every five minutes), and crying in between them. My back hurt so badly. The pain wasn’t in my belly, but in my back. And it hurt like you wouldn't believe. It felt like transition did with my second son. With him, incidentally, I didn’t make a sound until that point, when the cervix dilates from about 8-10 centimeters very quickly. My midwife checked me: I was only 3 centimeters. I cried because I still had so far to go.

My midwife decided to put me in the tub. I took off all my clothes, no easy feat when your back doesn’t work, and got in. It was freezing. My midwife had lied to me when she told me I could make it as warm as I wanted. I had two contractions in the tub and with the second one, I leapt out, all slippery with blind pain. They had to dress me this time. And we began to walk.

I thought you got a break between contractions. But with my back labor, that didn’t happen.

Together, my husband and I walked the halls. He stood behind me, his hands pressing hard downward on my lower back. Neither the midwife nor the doula stopped to help me. We walked for what felt like hours. I felt miserably nauseated from the pain, and started to vomit. Every time I tried to drink, I threw up from the pain. They tried to make me eat organic peanut butter, which looked like baby poop, so I barfed again. Finally, all that walking and barfing made me feel faint. I felt like I was going to pass out, but the only way to cope with the pain was to keep walking. My doula and my midwife tried to make me lie on the bed. I screamed.

When the midwife offered me an aromatherapy of aconite so I could “calm down” (as if this was somehow my fault), my husband insisted I be transferred to hospital. The midwife insisted I “could do this if [you] really want to.” I was screaming with every contraction and crying in between. This wasn’t fair. I thought you got a break between contractions. But with my back labor, that didn’t happen.

I was eventually transferred to a hospital, where I had to have several liters of fluid infused because of severe dehydration. At 6 a.m., an OB gave me the epidural. I was in so much pain I didn’t even feel that giant needle go in. I had a contraction with the epidural half-working, and said, “Is this all? I can deal with this.” They laughed at me and said I’d go numb. And I did. It was a blessing.

My son was born hours and hours and hours later, after a nap, Pitocin, and three hours of pushing. They were about to prep me for a c-Section when I pushed as hard as I possibly could and my son very suddenly popped out. This could have been, my OB agrees, when he flipped from posterior to anterior.

Back labor was hell. So much hell, in fact, that my other labors felt like nothing at all. I didn’t make a sound until transition with my second son (and then boy, did I make some sounds), but I made it all the way to pushing without an epidural, and I can honestly say it was easier than back labor with Blaise. Back labor was horrible. I was in constant, horrific pain, and my midwife treated me as if I were being a wimp. Back labor is not for "wimps," believe me. I thought for months that I just couldn’t hack an unmedicated childbirth until I realized what had happened to me. My body had betrayed me into more pain than a normal labor. And it sucked.