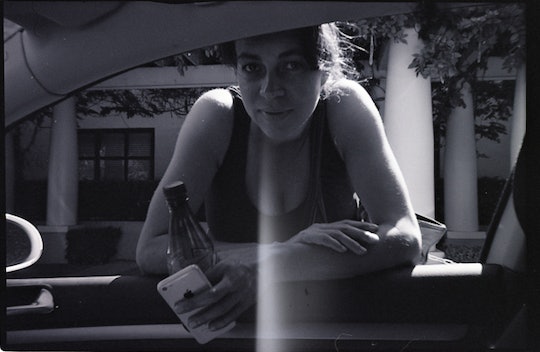 My Birth Plan Fell Apart, & Here's What It’s Like When Your Labor & Delivery Don't Go The Way You Want Them To

I was obsessed with planning the birth of my dreams. I bought specialized, way-too-expensive health insurance to cover a midwifery practice in Los Angeles. Despite feeling like most insurance companies I contacted didn't empower me to feel like I could birth outside of the hospital, I wanted to fight against that. So I paid the big bucks for the kind of delivery I wanted. And I found that the more I fought for what I wanted, the more intensely I fell into disappointment when things didn’t go the way I’d hoped.

Despite my best-laid plans and intentions, I ended up being diagnosed with gestational diabetes, a pregnancy complication that immediately categorized my pregnancy as high-risk. It meant my home birth, midwife, low lighting, and birthing ball dreams were just that: dreams. It meant in place of a huge tub, I’d get a doctor; and in place of singing and dancing my baby to life, I’d labor in a bed, incessant beeping and monitoring; music I hadn't asked for.

Birth plans are, by nature, there to guide your labor and delivery, to ensure that, no matter what happens, you’re able to keep some semblance of the plan you have in place for how you want to welcome your baby. By definition, it’s “a way for you to communicate your wishes to the midwives and doctors who care for you in labor. It tells them about the type of labor and birth you'd like to have, what you want to happen, and what you want to avoid.” And the closer and closer I clung to my specific ideals, the quicker they fell apart.

To cope, I did all I could to keep some form of consistency, to maintain some loyalty to my hopes for a birth plan that was still in my hands. I labored at home for as long as possible; I ate chips and guacamole at a mexican restaurant when my contractions were three minutes apart (would definitely not recommend this, even though it was pretty damn enjoyable) while my two birth partners drank margaritas. It was a welcome interlude to the chaos that had yet to come, because as soon as I got to the hospital, my birth plan – of free movement, low chemical interventions, non-neon light – went out the window. I felt like my body was betraying me. I had high blood pressure. I had to lie on my side strapped down with needles attached to my arms and monitors attached to my stomach. I couldn’t move. It was debilitating, physically and mentally.

My nurse said I needed Pitocin, a uterine stimulant, to make my labor progress faster. It wasn’t what I wanted, at all, but I said yes. A couple minutes after the Pitocin drip was attached to my arm, the waves of contractions went from manageable to catastrophic. It was the difference between a boat riding gently over waves and being in a storm in the ocean alone. One felt natural, almost neutral, and the other made me feel like my body was fighting something terrible off. My insides felt like they were at war.

I dilated quickly after that. I was 10 centimeters in a flash and had ask my nurse to turn the Pitocin off. She told me I was fine, but then she asked me to wait. She looked nervous, not believing me when I told her the baby was coming — and fast. When my doctor arrived minutes (although it felt like hours) later, my daughter was delivered quickly and suddenly. She was here, and all the plans I’d made were forgotten; there was this new, perfect person to get to know. And that was enough.

I've learned that the unpredictability of birth is part of what makes it so magical. My sister, who stayed with me throughout my entire labor, told me I wasn’t letting anyone down, including myself, when things went differently than expected. She held my gaze when I thought my eyeballs were going to pop out of their sockets. She heard me when I said I couldn’t do it. She told me, "Yes, you can; you already are." She reminded me of who I was. Next to her stood my husband, his strong shoulders and furrowed brow. I punched him over and over again, and he only paused to switch sides. They provided stasis and support in an environment that was unpredictable and scary.

In the midst of all the chaos, my daughter arrived. She was the only part of the plan I could count on. She was tiny in size but monstrous in spirit. She was immediately larger than life, bigger than anything in the room; a reminder that even when life does not unfold in the way we anticipate it’s still unimaginably beautiful.

My doctor, whom I grew fond of despite my initial inclination not to have one, saw her size and mentioned that I may have been misdiagnosed with gestational diabetes. He also said, given how quick my birth turned out to be, I would’ve been the ideal candidate for a home birth. So perhaps things could've been closer to what I'd originally dreamed up. Maybe they could have gone according to plan. They didn’t, though. I didn’t have the birth I'd planned on. I couldn’t plan it, predict it, or control it. But maybe it’s better that way.