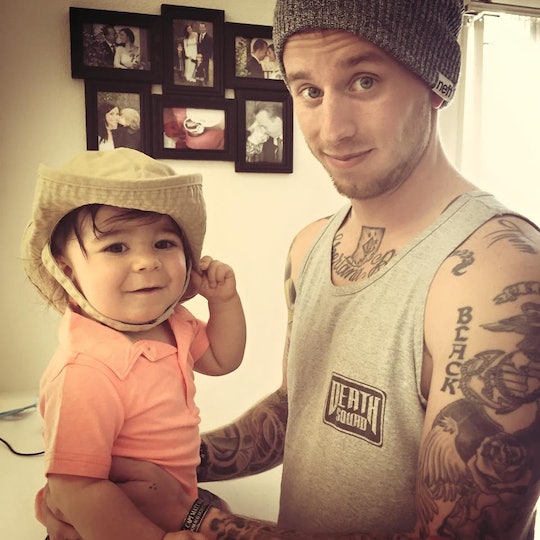 My Brother Was There For Me When My Son Lost His

I knew before the doctor even stepped inside my quartered off section of the emergency room. I knew when the ultrasound technician was attempting to locate the fetal heartbeats, plural, and became unceremoniously quiet half-way through her search. I knew my brother was lying when he said the babies and I were going to be OK; that he didn't completely believe the words I could tell he felt obligated to say. So when the on-call OB-GYN told me that at 19 weeks pregnant one of the twins' hearts had stopped beating, I wasn't surprised. I knew. The only good thing was that my little brother was there with me.

The plan — because there's always a plan, if only so that things can go spectacularly not according to plan — was for my brother to pick me up at San Diego International airport for a quick, five-day trip before he deployed to an unknown location for an untold number of months. I boarded an otherwise routine and god-awfully early commercial flight from Seattle, Washington, finding my place next to a kind, older woman who was traveling to see her daughter and newly-minted grandchild. But midway through the flight I started sweating. Suddenly I was nauseous and light-headed, and before I could react I was being shaken awake by a flight attendant. I had gone into full-body convulsions before passing out — and I was 19 weeks pregnant with twins.

He was hellbent on either following the ambulance or taking me himself and saving me one very, very expensive ride.

A neonatal nurse happened to be on the flight, so the kind grandmother switched seats and I received comfort and medical care from a relative stranger at 30,000 feet. As we neared San Diego I was allowed to call my partner to alert him of the situation, and my brother, who was supposed to pick me up at baggage claim. An ambulance was dispatched and waiting, so my brother was best served just meeting me at the nearest emergency room. He declined, though — he was hellbent on either following the ambulance or taking me himself and saving me one very, very expensive ride.

Doctors and nurses work quickly when a pregnant person has passed out, so I was ushered into the emergency room with an almost overwhelming amount of proficiency and haste. IVs were quickly inserted, bags of fluids were hung, blood was drawn, and questions were asked and answered so rapidly the room and everyone moving in and out of it became a blur. The one and only constant — the only person who could remain in focus — was my brother, sitting in the corner and looking back at me with purpose.

Everything was as it should be, we were just in a hospital instead of his living room.

Like most siblings, especially siblings that are only two years apart, my brother and I can have full conversations without actually saying a word. A look here, a head tilt there, a raise of an eyebrow here, and I know what he's thinking, and visa versa. As doctors and nurses worked around me — some barely acknowledging my existence as they drew labs and marked charts — I had a silent conversation with my brother. "Everything is fine," his eyes said. "This is just going to end up being an annoying footnote," his shoulders whispered. "You've always been somewhat dramatic," his smirk implied. "Thank you," I glanced back, wincing as another tube of blood was drawn.

It took a few hours before I was able to obtain an ultrasound, and in that time my brother and I were able to catch one another up on our individual lives. The details of his day to day, both major and mundane, since I had last seen him in person was comforting; everything was as it should be, we were just in a hospital instead of his living room. Because everything was going to be OK. This momentary hospitalization was just a formality.

When I was wheeled into the ultrasound room, my brother was almost floating through the hospital halls, carried by sheer excited. After 19 weeks he was going to see his future nephews for the very first time and in real life, not just a picture sent via text message. He was going to hear heartbeats, and see a tiny hand or a miniature foot move, for the very first time. He was thrilled to find and focus on this silver lining, and I was holding onto it as if it was a lifeline. "At least we will have this moment," I thought. My brother was going to have the opportunity to feel like a real uncle. He'd see the babies, and then we'd go home.

He was so excited to hear Twin B's heartbeat, and watch Twin B move on screen in real time. He was so excited, in fact, that he didn't notice the flat line on the bottom of the ultrasound when the technician searched for Twin A's heartbeat. I did, though. It was all I could see. The ultrasound tech fell silent, at moments whispering to her assistant but otherwise remaining stoic. After a few screenshots and measurements, she wiped off my stomach and told me the doctor would speak with me soon. I immediately turned to my brother, a look of panic and heartbreak on my face. "Wait for the doctor," he said. "Just wait."

My brother grabbed my hand, and kept me from floating into the guilt.

I didn't have to wait long; the doctor arrived 10 minutes later. He pulled up a rolling stool so he could sit next to the hospital bed and be at my eye-level, much like a parent crouches down to meet their child's eyes before telling them something they don't want to hear. "I'm sorry," he began, and I immediately allowed myself to cry. Any hope that I had read the ultrasound wrong, saw something that wasn't actually there, vanished as he explained that Twin A's heart was no longer beating, and probably hadn't have been for a week or two. His voice fell off into the distance as I immediately thought back to what I was doing two weeks ago. How did I cause this? What could I have done differently? What have I done?

And then my brother grabbed my hand, and kept me from floating into the guilt. His touch grounded me in the moment; the moment when the doctor said these things happen, and they don't know why, and they're not uncommon — even though they're devastating for many families.

"There's nothing you could have done," the doctor said, and my brother squeezed my hand as if to punctuate the physician's statement. "You did nothing wrong."

When the physician left my brother and I hugged long enough for my tears and snot to stain the shoulders of his shirt. When the sobbing subsided and I was able to catch my breath, I pulled away to try and find my bearings on my own; figure out where I was in this post-twin world; a new reality where I now had two of everything and only one living baby. And that's when my brother leaned toward me, looked me in my already swollen eyes, and said what I didn't know I needed to hear.

This is horrible, so it's OK to feel horrible, but this is not something you can't handle.

You were always going to be a good mother. Having one baby doesn't change that fact. You will be a great mother to the baby that's still alive.

You are going to be a great mother.

You can still do this.

I didn't believe him in that moment, and throughout the rest of my pregnancy I often thought back on my brother's words with skepticism and almost disdain. I didn't know if I could handle all the pre-term labor scares, or the menacing likelihood that I'd lose the remaining twin, too. I didn't know if I could handle giving birth to a baby that was alive, and the remains of what should have been that baby's sibling. I didn't know how I could work through the depression and anxiety, especially after my baby was born and the fear that he'd die was palpable.

But three days after my son was born, it was my turn to pick my brother up from the airport. My partner and I left the hospital with our newborn and immediately drove to SeaTac International airport, silently and at times not-so-silently cursing the drivers who had zero respect for speed limits. Sore and exhausted, I kept thinking back to the last time I saw my brother: the terrifying flight, the ultrasound, the news that I wasn't going to be a mom of two anymore. I felt raw and exposed, like even this first official meeting between my brother and my son was somehow tainted. I had made it through the pregnancy, survived the traumatic birth, but I still didn't know how I was going to get through a meeting that was supposed to be so celebratory.

But my brother was right: I could do this. As he held my son for the first time I watched his face soften. He stared at this little life — a life that survived in tandem with an unforeseeable death — with such adoration. And then I saw his signature smirk appear as he looked up at me.