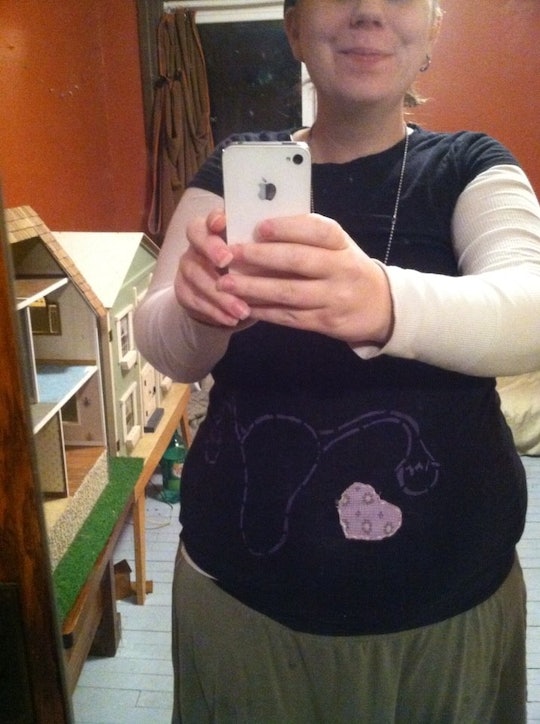 My C-Section Was Terrifying, But My Midwife Made It So Much Better

If you had asked me what my greatest fear was at the beginning of my pregnancy — or, hell, at any point before I had my baby safely in my arms — the answer would have been obvious. I was absolutely terrified of having a c-section. So I did what any newly pregnant, hippie-ish type person might do: I did a ton of research, and then I hired an experienced and competent home birth midwife. I thought that going that route was my best chance for avoiding the dreaded c-section.

In reality, however, my dreams of having a peaceful home birth were not to be. In the end, I still ended up on the operating table, and while I thought my midwife would save me from having a c-section, she couldn’t actually do that. She did, however, make having a c-section much less scary, and I'm eternally grateful to her for that.

I first met my midwife on a warm Sunday afternoon, when my wife and I took the bus to interview her at a local coffee shop. I showed up with a list of 41 questions (all of which were based loosely on this list) on a sheet of sketchbook paper. The potential midwife was friendly and knowledgeable, and she answered all of my questions to my satisfaction. One of the questions I asked her was what would happen if I needed to transfer to the hospital during the birth. She assured me that, if that were to happen, she would go with me to support me.

My midwife handled all of my prenatal care in the privacy and comfort of my home. We heard our baby’s heartbeat for the very first time in our living room. We talked about how I was feeling (terrible) and whether or not the little fetus at risk (no). Everything was going almost exactly according to plan.

As the due date inched nearer, I tried to ready our home and prepare to give birth. In the very back of my mind, however, one tiny fear still loomed: what if I ended up in the hospital, and what if I ended up needing a c-section? I told myself that I was doing all that I could to prevent that, but I couldn't shrug off that nagging question.

As we headed to the hospital, I found that I was too tired and in too much pain to focus very much on my fear of the unknown.

Then I started going into labor. I didn’t quite know what to expect (what new birthing parent does?) but I definitely did not expect what I got: a long, difficult, and confusing labor. I wanted so badly to give birth at home, but at a certain point I had to admit that I was exhausted and needed help. As we headed to the hospital, I found that I was too tired and in too much pain to focus very much on my fear of the unknown.

On Sunday afternoon, the doctor informed me that I was probably going to need a c-section. After everything I’d been through, I was hardly surprised. I was also a little scared: as someone who dislikes hospitals and had never been under the knife before, there was no way that having my body cut into wouldn’t have been at least a little frightening. But I would have been utterly terrified if it hadn’t been for my midwife.

Before I gave birth, one of my biggest fears was that a doctor might pressure me into a c-section when it wasn’t absolutely necessary. In the United States, nearly 33% of women have c-sections, a rate that has gone up by nearly 50% over the last 15 years, and some experts have argued that many of these procedures are medically unnecessary. I strongly felt that I needed to exhaust every other option before consenting to a c-section.

Without the support of my midwife, and the long and grueling start of my labor, I probably would have always wondered if I really needed the c-section. But she gave me the opportunity to try literally everything else first, which made me less frightened, because I knew that I wasn’t being pushed or coerced into it.

It was also incredibly comforting to have my midwife in the room with me while I was giving birth. Even though they were, for the most part, incredibly kind and patient with me, the doctors and nurses in the room with me were total strangers. But I’d known my midwife for almost nine months. I’d heard funny stories about her kids. I knew that she deeply cared about me and that she cared about my baby. Having at least one professional in the labor and delivery room that I had a genuine relationship with was deeply reassuring.

Above all else, my midwife was calm. Although nothing about my labor had gone according to plan, it was incredibly helpful to have such a relaxing presence in the room. My wife and mother were there, and they were trying to be as supportive as possible, but they were also both anxious for me and the baby. My midwife, however, was the picture of composure. I remember glancing at her smiling face and knowing that despite how strange and scary it all was, I was going to be fine.

The moment I consented to having a c-section, I'd be lying if I told you I had no anxiety about it whatsoever. But thanks to my midwife, who consistently reassured me that we had all done all we could and the procedure was totally necessary, I went into it with much less fear than I had previously thought possible. I had imagined that having a c-section was one of the worst things that could ever happen to me. But thanks to my midwife, on the day that my child was born, I confronted my fear and ultimately made peace with it.