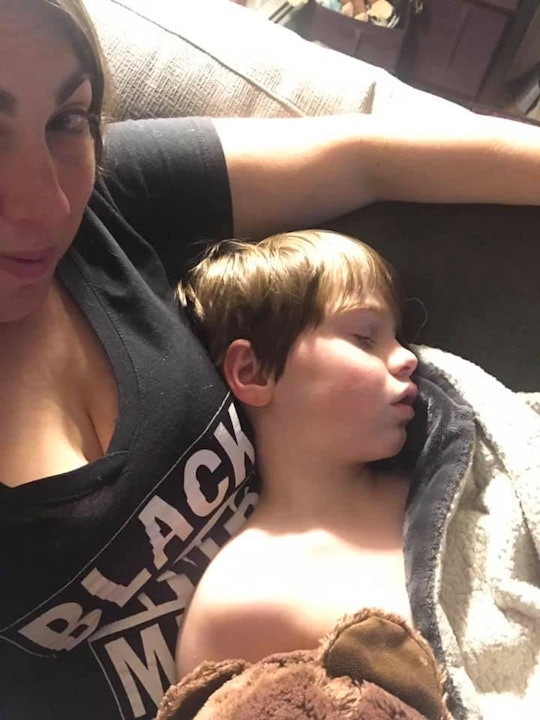 My Son Won't Let Me Tuck Him In Anymore & I'm Heartbroken

For the last three years, my working day has ended the same way every night: establishing and working through my child's bedtime routine. But now my kid won't let me tuck him in anymore... and I have some feelings on the issue. Big, strong, ugly mom-feelings. Because I'm a believer in the power of ritual, and I consider the process of doing something as beneficial as the end result. It's not just the caffeine in the coffee, for example, that wakes me up in the morning. No, it's also the scooping of the grounds; the pouring of the water; the tearing of the sugar packets. And it wasn't just putting my son to sleep that make the bedtime routine so beneficial. No, tucking my son in at night is and was so, so much more than that.

Bedtime in my house wasn't always what I'd call a "ritual." It was more like an exorcism, though I guess technically that's a ritual, right? My husband and I always tried to provide a "consistent system," i.e. a necessity touted by all the parenting books we read on the subject of a "good night's sleep." It was pretty straightforward — bath, brush teeth, pajamas, story, hugs and kisses, lights out — and likely familiar to any parent who's also sought expert advice on "superior sleep habits."

But our son couldn't read parenting books, you see, and therefore clearly didn't understand the importance of the "good night" routine. I can only assume this is why he chose to protest it every night for hours on end, running from his crib or toddler bed like a demon on fire. Shrieking. Screaming. Kicking.

It was great. Not at all traumatizing. Totally didn't mind that it went on like that for years. Definitely didn't care that by the time his protests downgraded from "find an old priest and a young priest!" to "routine, quickly defused annoyances" we had another newborn, who brought with her the brand new baby sleep routine better known as "I'll sleep when the f*ck I want to sleep and you'll deal because I own you."

*gentle laughter that quickly breaks down into quiet sobbing*

But somewhere around the time my son was 5 and my daughter was 2, a magical thing happened: the bedtime routine — the one we'd stuck to for years despite middling success — worked. For both of my children. At the same time. By 8 p.m. they were in bed for the night. My son stopped being difficult. My daughter either followed this example or the Universe was just like, "These two poor parenting souls have suffered enough with the first one. They've earned an easier toddler this time around."

Good things come to those who sleep. You're more patient. You're less stressed. And you can find pleasure in places you might not have imagined before. This is how the bedtime "routine" became the bedtime ritual: a familiar series of choreographed steps that we all knew by heart and brought us not just the desired outcome (children who stayed in bed, fell asleep, and stayed asleep) but a genuine sense of contentment and family togetherness. The choosing of pajamas; the reading of the same book, over and over for weeks, with the same character voices, intonations, and lilts every time; the hugs and kisses that were, somewhere along the line dubbed "one minute cuddle."

And now I feel it slipping away.

He'll always need us, but he doesn't need us for this.

My kids are each in their own room now. My son, now 8, was craving more privacy, more space, more quiet and, on top of that, a later bedtime. All reasonable requests in a house with a spare bedroom. But when that happened, the bedtime ritual disappeared. The steps are still there — brush teeth, pajamas, story, cuddle, lights out — but the ritual aspect of it is gone. There are upsides. There's a special "quality time" each child gets all to themselves with my husband and me, something my second child never had and my son hadn't had in years. It's nice... but it's also not the same.

My son still gets stories and cuddles, but it's clear now that those days are numbered. He's just as capable of turning on his own nightlight and reading his own stories. He'll always need us, but he doesn't need us for this.

If you had told me, when our children were 1 and 4, that there will be a day when I wouldn't have to do the whole bedtime routine I would have kick up my heels in celebration. But now that that day is, for all intents and purposes, over, it feels like a monkey paw wish. I got what I wanted... and wow does it suck.

I would never, ever tell a fellow parent to "cherish every minute," because not every minute should be cherished. If I had to choose between going back to my son doing his best Linda Blair impression while my newborn screamed bloody murder, and losing the routine, I'm choosing to lose our routine.

But I will say this to all of you in the thick of it:

So much of what you're doing right now sucks so hard, and you will never look back on it fondly. But along the way, you may discover it starts to suck less, and then one day, somehow, the idea of it ending hurts your heart. Don't wallow and don't be afraid, though, because I never even knew I was starting something special at the time, and I'm sure the seeds have already been planted for my next favorite ritual with my children. I can't wait to see what it is.