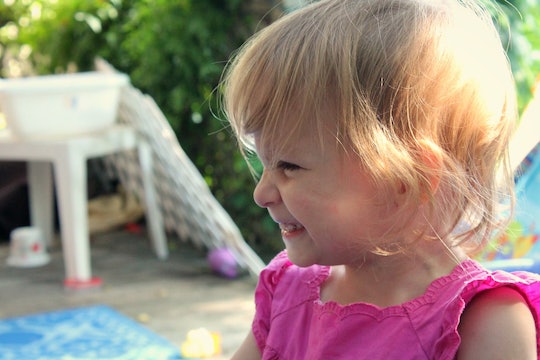 My Daughter Has Cerebral Palsy & I Had Absolutely No Idea

If everything had gone to plan, then on this day three years ago, I would have been giving birth for the first time. Well, OK, I guess I probably wouldn’t have, because hardly anyone actually delivers on their due date — and I was pregnant with twins, so I’m pretty sure delivering on your exact 40-week due date probably has the same odds as winning the Powerball or something. But every year, my due date anniversary creeps up on me, reminding me of everything I missed out on when my twins were born three months premature. This year, in a twist of incredibly bad timing, the twins’ yearly developmental check-up was scheduled for the same miserable week as the dreaded Due Date Day.

As we made our way to the clinic, I couldn’t help but think that we’d dodged all the scary preemie bullets. Madeleine and Reid were doing so well, so much better than expected, that appointments like these were starting to feel redundant and unnecessary. I smugly explained to the doctor how miraculously perfect my children were, how lucky we’d gotten, and couldn’t possibly imagine that the doctor could disagree. Which was probably why I was completely unprepared when what she actually said was that my daughter has cerebral palsy.

When Madeleine and Reid were born at 25 weeks and five days gestation, we knew the odds were against us. And then, shortly after, when we learned that Madeleine had suffered a fairly significant brain hemorrhage, we knew that those odds were getting even worse. What followed felt like a series of worst-case scenarios: the hemorrhage could have self-resolved, but it didn’t; the ventricles in her brain began to swell more than we’d hoped they would, and she needed a temporary shunt surgery to buy us some more time until she was big enough for a permanent one. By the time she had that surgery — her second brain surgery before she’d even reached that stupid, far-off due date — we knew that we probably wouldn’t be walking away from all of this without some kind of lingering issue. The doctors told us about cerebral palsy and seizures and cognitive deficiencies, and they told us that they had no way of knowing what Madeleine’s future might look like, for better or for worse.

When the doctor began asking questions like, “Does she always walk on her toes like that?” and, “Do you find that she prefers her left side?” and, “Did anyone from the NICU clinic say they wanted to discuss any diagnoses?” I knew something was wrong.

For so long, those words hung in the backs of our minds and haunted us, as we watched our little girl grow, all the while trying to look for signs that would tell us things like whether she might walk one day, or talk, or run and play. These are things that reveal themselves agonizingly slowly, so we used that time to adjust to the idea she wouldn’t be able to do any of those things, allowing ourselves to realize that, even if that was the outcome, she’d still be our amazing, gorgeous girl who makes our lives so much better just by being in it.

But eventually we started to see Madeleine hitting all of her milestones. We saw her keeping up with her twin brother. We saw her crawling and walking and climbing and running. And we watched as she turned into a hilarious chatterbox who hardly ever shuts up. Slowly, and without much discussion, we allowed ourselves to consider that maybe nothing had happened to Madeleine at all. Maybe it was possible that she emerged completely unscathed.

This diagnosis, on the third anniversary of the day Madeleine and Reid were supposed to be born, reminded me that the worst fears weren’t actually behind us at all. That, as a parent, worst fears never really go away.

A week ago, I’d have told you that Madeleine and Reid were healthy and fine and wonderful, that somehow they’ve managed to catch up and be like every other 3-year-old, despite their difficult beginning. I’d have told you I didn’t really have any concerns anymore that were preemie-specific, and that it felt kind of weird to even talk about that stuff now as though it was still part of our daily lives. Then, the appointment came and when the doctor began asking questions like, “Does she always walk on her toes like that?” and, “Do you find that she prefers her left side?” and, “Did anyone from the NICU clinic say they wanted to discuss any diagnoses?” I knew something was wrong.

Cerebral palsy (CP) had once been my worst fear for Madeleine, even though the clearer-thinking part of me knew that it wasn’t that bad, that so many kids with CP live full, amazing lives, and that having trouble with your body doesn’t change who you are. But as we watched her become a thriving, active, running, dancing, and jumping child, I assumed the days that belonged to our worst fears were far behind us. This diagnosis, on the third anniversary of the day Madeleine and Reid were supposed to be born, reminded me that the worst fears weren’t actually behind us at all. That, as a parent, worst fears never really go away.

Learning that our world had changed yet again on my due date anniversary made it sting a little more; another reminder of something I wish we hadn’t ever had to endure.

The good news is that, because Maddie is still running, dancing, and jumping, her CP is clearly mild. It’s not interfering with her life right now — which is obvious because I didn’t even know about it — and it probably (hopefully) won’t in the future. We’re not sure what treatment she’ll need, and we’re not sure about very much at all at this point. I do know though that, all things considered, the odds still worked out majorly in our favor.

But even though it’s “good” bad news, and even though I know I don’t even really have any right to complain knowing how many other parents have gone through so much worse than we have, Madeleine’s diagnosis has really thrown me. And learning that our world had changed yet again on my due date anniversary made it sting a little more; another reminder of something I wish we hadn’t ever had to endure.

Today, as I do every year, I’m going to feel sorry for myself. I’ll let the laundry pile up and maybe I’ll have ice cream for dinner. And then tomorrow, I’ll wake up and remind myself that I have a healthy, energetic, stubborn, chatty daughter sleeping in the other room who is so much more than her diagnosis (and a healthy, energetic, stubborn son who is just as amazing). I’ll be grateful again that we got so incredibly lucky. And I'll plan for tomorrow, the same way I did when our children were born three months too soon, no matter what curve balls come our way.