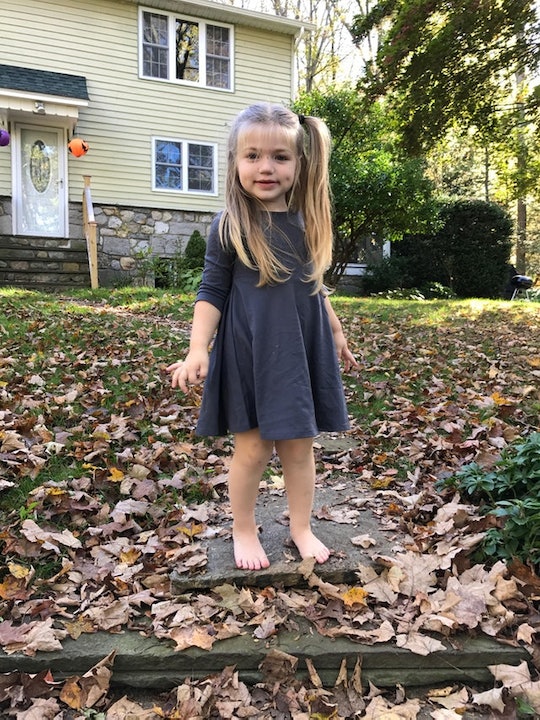 I know how this sounds. If I saw it myself, I'd assume it was a humblebrag. "OMG! My daughter is so beautiful. She's like, too pretty maybe? Like, just so beautiful. Everyone is always telling me how pretty she is and I'm like 'Ugh!' OMG stop. I hate it!" But, if I'm being honest, I'm worried about my daughter being beautiful. It doesn't keep me up at night or make me want to ugly her up somehow. And it's not like I'm somehow disappointed she's lovely. But, in our society, beauty never stands on its own, and it's packaged with a lot of other expectations, rules, and presumptions that give me pause. Significant pause.

Now don't get it twisted: if you're putting "people who fall under conventional and privileged standards of beauty" people versus the people who don't, the former definitely have the better deal. Sociology and science (and 30 Rock) have shown that beautiful people experience the world differently. And by differently, I mean "full of advantages based on their good looks." There's power in pretty, often more than we are willing to recognize or admit. Moreover, there's a whole racist, sexist, fatphobic hierarchy of the things we even consider beautiful to begin with, and that's deeply problematic. My kid has, in many ways, hit a privilege jackpot.

So, why am I worried?

First, let me just say that I know everyone thinks their child is beautiful. It'd be a little weird if we didn't, to be honest. So what I mean when I say "my daughter is beautiful" is that she fits a widely-held beauty standard. She's a smiley white girl with blue eyes, good teeth, and dimples. And not to undermine my kid, but if that was all she had going for her she'd probably be a standard cute kid as far as other people were concerned. Nothing would make her more or less beautiful in my eyes, but I know that what makes her stand out, especially to strangers, is her long blonde hair. It's already been cut twice and it falls, shiny and thick, to the middle of her back. Frankly, it's weird to see a toddler with hair this long.

People cross parking lots to compliment her hair. They stare in the grocery store and edge closer to try to strike up a conversation about it. They'll ask how she has "such a perfect top knot." (Answer: because I'm lazy AF and didn't feel like braiding it and also she has a crap ton of hair that grows in every which way and it works out somehow.)

"That hair!" people proclaim. "Oh my God, you can never let her cut it! It's so beautiful!"

And, yeah, I love her hair. One of her nicknames in our house, in fact, is "Baby Rapunzel." (The resemblance is uncanny if you ask me.) But do you see where I'm starting to maybe get a little uncomfortable here?

"You can never let her cut it."

When people tell her not to cut her hair, the unspoken message is, "You are conforming to our standards. Keep up the good work, because conforming will benefit you.

There's so much wrong with this statement, starting with the fact that it's often uttered by a total stranger. Like, "Yo. Person. You have absolutely no horse in this race so I don't know why you're getting bent out of shape." Second, I don't control my daughter's head, not what's on it or in it. So if she wants to cut her hair one day, that's her choice to make for herself and I'm not going to stop her. Third: hair grows, friends. This isn't even a permanent decision. You need to calm down.

But, on a non-practical level, I get it. Like it or not, hair (especially, I'd argue, women's hair) carries a lot of sociocultural weight. Hair is often closely tied to how a person is seen in terms of femininity and beauty, and in our society there's a lot of pressure for female-bodied people to be seen as feminine and beautiful. Hair like my daughter's — long, blonde, thick, and silky — represents a kind of ideal female beauty and, unfortunately, beauty is often a means to female power. So when people tell her not to cut her hair, the unspoken message is, "You are conforming to our standards. Keep up the good work, because conforming will benefit you."

I recognize the benefits and appeal of conforming, but I resent their existence. Conformity in a bullsh*t system can get you ahead, but that doesn't change the bullsh*ttery of said system. Moreover, there's only so far a woman or girl can get in a system that bases so much of her worth on her appearance.

Growing up, I saw being pretty and feminine as extremely important, and I, like many women and girls, but a lot of emotional baggage into my hair. Like my daughter, I had long, pretty hair from a young age and it garnered a lot of the positive attention I received about my appearance. As a result, my hair was a part of me from which I could draw self-esteem about my physical appearance. As I got older, it became the only aspect of my body I felt I could. Anecdotally, I know I'm not alone. Go ahead and ask the women you know to name the physical attribute they like best about themselves, because I will bet you money they will say "my hair." (And if they don't they'll say "eyes" or "smile.") Hair seems to be one of the few things a woman can express she likes about herself without coming across as "vain." Because remember ladies, it's important to be pretty, but you can never admit it or take pleasure in it because your beauty isn't for you! It's for the people looking at you!

I never want my daughter to have so much placed on looks in general or hair in particular that she feels that she needs to rely on them for acceptance, love, or self-esteem.

Having beautiful hair allowed me to feel like there was something beautiful about me. It served as a kind of shield. I may not have been thin or traditionally stunning or had clear skin, but damnit I had good hair. I was so invested in the idea that my hair was the only thing that kept me from being seen as a hideous mutant that I did not cut it (except for the occasional trim) between the ages of 7 and 20. (The liberating revelation I had about my self-worth and self-image after cutting my hair is another story for another day.)

I never want my daughter to have so much placed on looks in general or hair in particular that she feels that she needs to rely on them for acceptance, love, or self-esteem. So I worry about what all this (well-meaning!) positive reinforcement is teaching her. After all, who doesn't like hearing nice things said of them? I'm a total approval junkie, so I get what a heady drug praise can be and that it can be really hard to give up once you're used to it. But I don't want her to think that pretty is the price of admission as a girl in society, or that her hair is the key to being seen as beautiful and, as a result, worthy.

I also don't want her to think beauty is where everything stops and ends, and I don't want anyone else to think of her only or even primarily as a pretty face (or head of hair). I don't want who she is as a person to ever get lost in the shuffle or seen as secondary to her looks.

My daughter is a sassy, kind, funny, smart, compassionate, artistic little weirdo who also happens to be lovely with a whole lot of beautiful hair. So when someone who has spent any amount of time with her goes on about her looks, I just want to scream, "But did you see how masterfully she used blended colors in her art project?! Did you notice how she correctly used the word 'vanquished' in a sentence?! That's so much cooler than her braids!"

I don't want who she is as a person to ever get lost in the shuffle or seen as secondary to her looks.

Fortunately, she doesn't seem to be overly-concerned about being pretty... but I want to keep it that way and I wonder if I can.

Beauty standards worry me in general, but having a beautiful daughter makes me worry about them in a very particular way. Because it's one thing to say, "This is all illusory crap that we should turn up our noses at," but there's something really tricky about saying, "This is illusory crap and I know you're benefiting from it but I need you to understand that those benefits aren't significant enough for you to warrant buying into them too much."