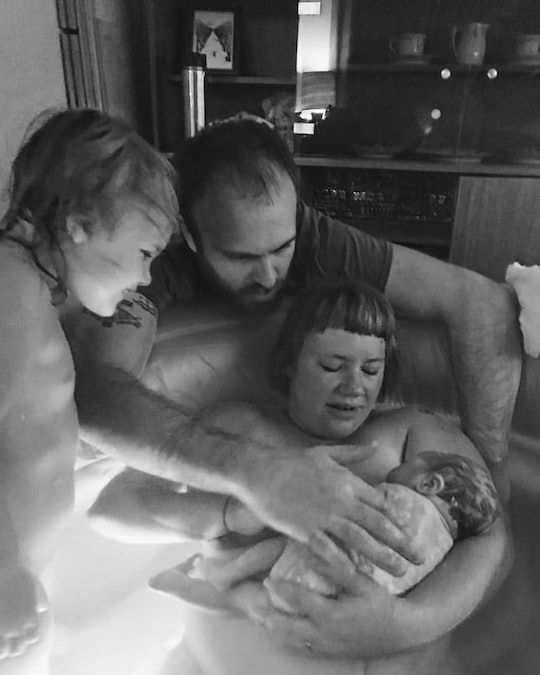 My Toddler Was In The Birthing Pool With Me For My Second Baby, & Here's How That Looks

“Here you go, Mama, this will help,” my 3-year-old daughter says as she places a washcloth on my laboring body. She’s dipping it in the warm water and gently laying it on my belly, and when I turn around to grip the handles on the birthing pool and hunker down, because her baby sister is coming soon, she dips it again and carefully rests it on my lower back.

I try to imagine what becoming a mother for the second time would be like without my 3-year-old daughter in the picture. Apart from the obvious fact that there would be no child to actually call “additional” without her there first, I can’t see my journey of growing another baby and a subsequent child-birth to be nearly as fulfilling without my daughter by my side during the delivery of her sister. The first months postpartum have been largely about our new baby and me and adjusting to our new family rhythm. But I see now looking back on the birth in a different light how extraordinary it is that my first-born was just as much of an important part of my birth team as my husband. Her growing up with that knowledge and being the sibling in the birthing pool is deeply gratifying and a subject I anticipate talking about with her for years to come: the effects of it give us so much to unpack together.

Mothering a daughter (now two!) has felt like the most natural thing as we have our gender in common. For me, nothing yet in her short life has been more I AM WOMAN, HEAR ME ROAR than teaching my daughter about pregnancy, child-birth, and looking after a tiny baby. It’s more filling her in on what’s happening in order to more mindfully help her navigate the change from only-child to big sister and less about her own potential experience later in life. Although, even at three year’s old, we talk about that stuff, too. We talk about everything really. And that’s why it felt so instinctive to bring her along for the journey.

She was a part of it from the very beginning. “Baby,” she whispered as she put her warm, wet hand on my stomach one night in the bath together about a week before I knew I was pregnant. My husband and I had been trying to conceive, and we’d talked about the subject of her having a brother or sister only a couple of times. “Does mommy have a baby in there?” I asked. “Yes,” she said decidedly, nodding her head, not quite 2-and-a-half then, as if she understood she knew something I didn’t yet. Something about the water.

Her presence grounded me.

She was my plus-one at my first midwife appointment and heard the baby’s heartbeat even before her dad. She came to several ultrasounds with me and marveled with me about the little baby parts we saw on the screen. She made up a song about “jelly on my belly” after seeing the ultrasound gel applied several times. We talked extensively about our home birth plan and intention to have her there in the months leading up to it, watched videos of other home births where siblings were present, and took her through a toddler-friendly illustrated “map” (there were rainbows and hearts!) of the laboring and birthing process we got from our doula.

On the night I went into labor, she was tucked into bed asleep and unaware anything was kicking off downstairs. Once I realized labor was progressing quickly, I remember wondering if she’d even get to be a part of it as I had imagined, hoped, and prepared for.

But sure enough, she woke up in the night having peed in her sleep and called down for us from the top of the stairs. My husband went up to her and told her, “The baby is coming!” He carried her down, and I remember greeting her with a smile and a little, “Hey, baby.” There was a peaceful look of curiosity and excitement as she scanned the room to see the birthing pool we had told her so much about (the “inside paddlin’ pool,” as she called it) and my doula she had already met on a few occasions. Her soiled pajamas had to be taken off, and I was just about to get into the pool anyway, so she got in with me straight away.

'Mummy did a poo! Get it out!' she exclaimed passing the sieve to someone.

She gently splashed around, played, and tried to drink the water as any 3-year-old would do. She seemed totally at ease with the movements and sounds I made. I paid her minimal attention as I was in my zone — just little comments here and there — but her presence grounded me. I was thankful for her sense of innocence and that inherent celebration young children bring to any occasion. Something about the water.

Because she was and currently still is endlessly interested in all manner of bodily functions, she was the first to spot the inevitable number two that I passed whilst laboring. “Mummy did a poo! Get it out!” she exclaimed passing the sieve to someone. I had thought that might happen and that it would be highly poignant to her as she’s heard us telling her countless times not to wee or poo in the bath or in the swimming pool. It’s still one of her favorite parts of the story to tell people or to reminisce on!

I wish I had a video to see what her face was like when her sister emerged from me under the water and then out into my arms. When I’ve asked her what it was like when she first saw her, she replies with excitement, “She was yellow!” I’ve also asked her if the experience was scary, to which she matter-of-factly stated no. I feel like I’ve given her something priceless in how she now views childbirth — that it can be a natural, domestic event — something the majority of her generation (and mine) don’t know, something that was totally common a century ago. In a mystical way, I feel like I’ve given her a key to the past that might help her in the future: an ability to see the way things are commonly done but to choose her own instincts and intuition if she deems it appropriate as I did with choosing to home-birth her sister.

Truth is I pursued a home, water, hypnobirth because of how my first daughter’s labor and delivery played out: an induced, 30+ hour event that resulted in me resigning to a c-section, a choice I personally didn’t want to have to make but wasn’t empowered enough to know I didn’t have to. Her birth story was an influence in the very reason she would even have the opportunity to be in the water with me. Maybe having her there was a way I could redeem for myself how it all happened during her birth. Maybe that water in the pool connected us in the way we didn’t get to the first time. Something about the water.

I hope there’s also a unique kinship that goes beyond the fact that they’re siblings for my daughters to discover in the future, but it hasn’t miraculously made my eldest daughter immune to the feelings of jealousy or the struggles of no longer being an only child. Her emotions and moods have been intense like any young child’s. She loves “our baby”, as she sometimes refers to her, with such joy, but she’s also tempted to and often succumbs in taking out her frustrations on her sister.

But I can already see some effects of the bond that birthing pool gave us. It comes out casually as we’re going about this mother-daughter experience. One night in the bath, my daughter got on all fours and started breathing heavily. “What are you doing?” I asked. “Breathing,” she said. “Why like that?” I asked further. “Like you when your back was hurting,” she replied. Not sure what she meant, I started thinking back to when I ever bent over taking deep breaths from back pain in front of her. Then, it dawned on me. “Are you having a baby?” I asked with enthusiasm. “Yes, like you did!” she said, eyes lit up as she picked her baby doll out of the water. “Look at my baby!” she cried. Something about the water.

Whether she ever becomes a mother herself, she’s one heck of a big sister, an absolute joy of a daughter, and a bona fide birthing companion.

More Like This
A C-Section Actually Doesn't Take As Long As You Think, According To Experts
Here's The Best Time To Remove Your C-Section Tape
Can The Way You Sleep Really Turn A Breech Baby?
These 4 Sleeping Positions Will Keep You Comfortable After A C-Section