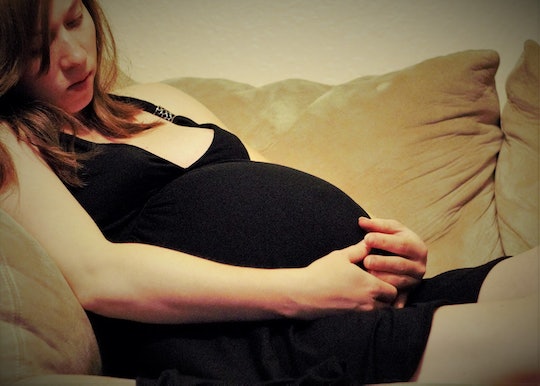 My Doctor Forced Me Into Giving Birth Before I Was Ready

Like many other woman expecting a baby for the first time, I was anxious for my son to come during the last few weeks of my pregnancy. I constantly wondered whether or not I was in labor every time a contraction would hit. I didn't know if my Braxton Hicks contractions were a sign that I baby was on his way or just a forewarning of what was to come. I was worried I wouldn’t know when it was time, even though I was living mere minutes from the hospital. I even worried if I'd have enough time to get from my home to said hospital before baby came. In truth, I was bored with pregnancy and ready to meet my baby. And on the cusp of 38 weeks pregnant, I'd convinced myself that I was indeed in labor and had my husband take me to the hospital.

What I didn't know then was that I was nowhere near ready to give birth. My body was inching closer toward labor and delivery, yes, but there was nothing about my baby or my body that signaled that my son was ready to arrive that day — or even in the coming days. Time and the gift of two other successful births has shown me so clearly that I was forced into giving birth by my doctors.

My contractions had been regular, albeit not strong for hours. It’s a pattern I know well now after three babies. I was in early labor, a place my body likes to camp out at for a couple weeks leading up to birth. When I got to the hospital I was four centimeters dilated, which again, is a place I now know quite well. With my last two pregnancies, I stayed at there for one to two weeks before making the progression to a full six centimeters (and what's known as active labor). Most women don’t have such long early labors, but it’s still a common enough variation of normal. The hospital staff should have taken one look at me, anxious and excited but not writhing in pain, and sent me home.

But that wasn’t what happened.

After finding me at four centimeters, the medical staff at the hospital where I was to give birth decided to keep me for an extra hour for monitoring. At the time, I thought this was standard procedure. Maybe I would progress fast? Maybe baby was on his way? I trusted that they knew something I likely didn't, and I had no reason to think differently. They let me walk around to see if I would progress. I didn't. When the nurse came back and checked me and said I was still only four centimeters dilated, she announced that she wanted a second opinion. I wasn't totally sure why — and with every passing second, the fear inside me grew. Was something wrong? Had something happened? Was I OK? Was baby? Another nurse with decidedly smaller hands came in and decided I was closer to four and half centimeters. The other nurse checked me again for the third time and decided maybe I had made some small progression. Then, upon seeing the blood on her hands (likely caused from several invasive dilation checks in a 15-minute window), she told me I was having my bloody show and admitted me.

I thought it was a sign that my son was on his way, that I was in active labor, and that I had nothing to worry about. I didn’t know any better. How could I?

From that moment on, I was at the mercy of the hospital staff. Looking back, I wonder if over the course of the next few hours anyone realized they’d made a huge mistake. I wonder if anyone felt like maybe they shouldn't have admitted me. I wondered if they realized I wasn’t in labor. I can't help but think that someone must have known. Doctors and nurses have seen enough women in moaning, excruciating active labor to have realized that I was still coasting along. I lived five minutes from the hospital — a point I made clear at every possible pass. I could have gone home. But the paperwork was already done.

The on-call doctor came in the middle of the night and asked if I wanted my water broken. I didn’t. He told me he’d only wait until 5 a.m. and then they needed to get things moving. What had originally sounded like a question suddenly became an ultimatum: Do this now, or I'll have to do it myself later. I was taking too long and not progressing. I felt bullied into having my water broken, because at 5 a.m. on the dot my doctor returned. Nothing about my labor had gone according to plan up until this point. Everything felt like a misstep. I realize that I could've spoken louder — made my frustrations heard clearer — but I didn't exactly have a guide book on hand for how labor and delivery were supposed to go. What if this was normal? What if it was because something was wrong and the medical team didn't want to scare me? I trusted them blindly. My life, and my son's, were in their hands, and even though I had the sinking feeling in my stomach that things were not right, I muffled it.

After breaking my water, I was then given Demerol for the pain. Instead of telling me it was a powerful opiate that would slow my labor and make me feel drunk, the nurse told me it was like Tylenol in my IV.

I spent the next 10 hours in excruciating pain as my body fought as hard as it could to keep my baby safe inside me. The Demerol and the induction forcibly signaled to my body that it was time for baby to come, but it wasn’t time yet. My baby wasn’t ready. The Demerol made everything hazy, and I couldn’t think clearly. Because of the white-hot pain, the staff gave me an epidural. At that point, I didn’t have any fight left in me. I remember being frightened as it happened. Everything was screaming inside of me for this to stop, but no noise ever came out. I remember saying over and over again that something was wrong. I remember throwing up in my hair … and then everything went black.

I nearly died. My heart rate plummeted after I passed out, and so did the baby’s. I’m not sure how long I was out, or how close to death I came, but when I woke for a brief moment before passing out again, I saw my husband and mother crying. I saw the fear in their eyes, the white coats of doctors all around me, felt the sheer terror of the moment. When my eyes rolled back a second time, I felt certain I would never open them again.

I had waited months to meet my son. I had envisioned the life we'd have together. The smiles, the songs, the diaper changes, all the firsts we'd get to experience together as a family. I'd made grand plans for the three of us — my partner, me, and our baby — and with each passing second, I felt sure that I'd never have the chance to see them materialize.

Fortunately, I survived. And even though they had to cut me to vacuum out my baby then send him to intensive care for jaundice due to his liver not being fully functioning yet, he survived too. I felt lucky that day. Not because of the medical interventions that had saved us, but because I was given a second lease on life. Now, looking back, I feel anger and disgust and overwhelming sadness for what might have been. I might have had the natural birth I wanted days or maybe weeks later, but I was robbed of that chance. I might not have faced massive medical bills for a baby that wasn’t ready to live outside the womb. I might not have suffered from postpartum depression in the wake of a traumatic birth experience. There are so many what ifs that I simply don’t know.

What I do know is that things should have been different. My life and my baby’s life should have been a higher priority. I wasn't ready. Surely someone should've seen that. I should have come home instead of coming close to death.