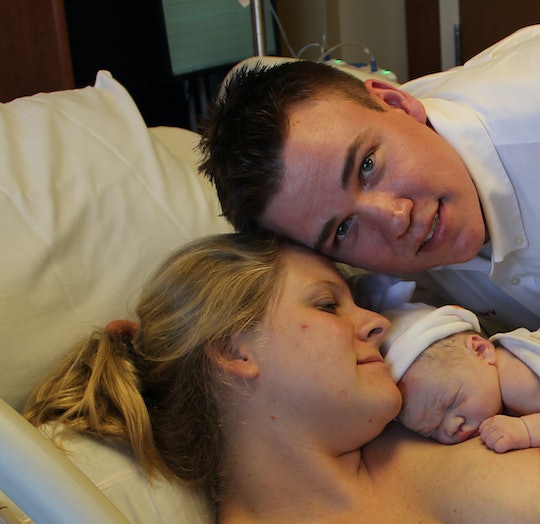 My Doctor Gave Me A "Husband Stitch," & I'll Never Forgive Him

The first year after my first baby was born was hard. It was sleepless nights, breastfeeding challenges, and trying to make sure I was fulfilling the needs of this tiny life I created. And although fulfilling needs was how we got here in the first place, one of the most unexpected plot twists after her birth was my absolute aversion and horror to the thought of sex with her father. For years I chalked it up to hormone changes and the trauma of having a human plow head-first through my downstairs. But a kind doctor later revealed that I had been given what is disgustingly known as a "husband stitch".

My first childbirth wasn’t traumatic in the sense that I lost the baby or almost died, but I was given drugs I begged not to have, and an episiotomy I hadn’t planned for. My labor was 22 hours with three hours of pushing. So when the doctor finally told me episiotomy or c-section, I agreed to the cut. He sliced me and she was born.

I held her for a moment before they whisked her away to be cleaned off. I was too tired to fight. The doctor injected me with a little local anesthetic, and told me he was going to just sew me up “nice and tight” and we’d be all done. He winked at my husband when he said it, but I was too out of it to even be annoyed.

At my two-week postpartum checkup, the same doctor came in the room eyeing his clip board instead of me and half-heartedly asking me if I wanted to kill myself or my baby. Since I didn’t, he insincerely asked if I had any questions. I knew it was vain, but I asked if there was anything I could do about my stretch marks. I couldn’t look in the mirror without crying. He told me they’d fade, and not to worry about it. Then he pulled up my gown to pound on my uterus, and he said “Whoa! No those stretch marks are really bad. Those aren’t going anywhere. I don’t think I’ve ever seen them that deep.”

I fought back the tears, but to this day I wish I had strangled him. The jail time would’ve been worth it.

The only other piece of info he gave was that in just a few more weeks I’d be clear for sex. I told him I didn’t think I’d be ready in six more months, but he ignored me.

At the six-week mark my husband tried to act normal, but I think he was more excited about that than he was about our baby’s actual birth. Right after she was born, my vagina felt like it held a crowning bowling ball. As far as I was concerned, it was still a war-torn country at six weeks. I told him I was scared, so we put it off. But two weeks later, he was “just curious” if I was ready.

I obligingly said we’d try, and we did. But we didn’t even get a full try in before I was in tears. Crying isn’t his kink, so we shut it down once again. We didn’t try again until our daughter was four months old.

I figured I’d just work through the pain, and I did try. But it felt like my husband wrapped his junk in fly paper, then rolled it in shards of glass. Not as sexy as it sounds. Still I bit my lip and pretended it was fine. I did that until she was six months old.

My midwife told me the extra loop is often called a 'husband stitch' because idiot 'physicians' who do it think they’re making a nice little 13-year-old vagina for the poor husband who has to smash into the damaged goods of a post-birth crotch.

When my husband figured out I was faking it, I went back to the doctor at his urging, and I told him that sex was absolutely excruciating. He told me it was normal for it to be a little painful at first. But he wouldn’t listen when I told him it was more than a little painful. I even brought my shards-of-glass description. He told me he didn’t have answers for me, but that I should just stick it out and it would eventually be fine.

I kept trying, thinking things would get better, but it didn’t. All-in-all I had about 18 months of “shards of glass” sex, then it slightly improved to just “lots of paper cuts” sex. Most of the time I got out of the deed because we had a needy breastfeeding baby who never slept. But during the occasional weekend nap time I’d try. If it was too excruciating, I’d tell him and he’d stop and just hold me. But I was pissed at myself for not wanting sex with my own husband.

I finally stuck it out long enough to get pregnant again, but I switched to a new female general practitioner. I hadn’t told her about the pain because my last doctor told me to just suck it up. I resigned myself to the idea that it was my new normal.

I had a dream labor and delivery with my next baby, and my doctor said I naturally tore just slightly along my episiotomy line.

That birth ended up being a healing one in so many ways. Not only did I get the natural labor and delivery I wanted, but sex didn’t hurt as much. At the six-week mark I was ready to try, and at the eight-week mark I actually enjoyed it.

It was the high from my second birth that made me want to be pregnant again. But we were both absolutely done having our own babies, so I became a surrogate. We’d recently moved back to Texas, so I had to find a new doctor. I signed on with a midwifery practice because I’d had such an amazing experience with my female GP back in Indiana.

I’d been so apprehensive about sex that I’d actually pulled a vag muscle trying to keep intruders out.

At my first appointment they took time to really talk to me about my health history, and I felt like maybe it was time to ask again about the painful sex. Rather than telling me to suck it up, my midwife was horrified. She told me it even if something was common, it didn’t mean it was normal or something I should just “live with.”

She examined my nethers, and after some poking around, she told me she thought she found the sources of my pain. The first was a strained muscle. Apparently I’d been so apprehensive about sex that I’d actually pulled a vag muscle trying to keep intruders out. The second was that it appeared I’d gotten an extra stitch at some point. I wasn’t currently sewn too tight, but there was evidence that at some point I’d been sewn up past the original seam.

There’s no question to me which seamstress did that little alteration. After my female doctor’s handy work my pain was considerably less than the male OB’s botched job. I was furious.

My midwife told me the extra loop is often called a “husband stitch” because idiot “physicians” who do it think they’re making a nice little 13-year-old vagina for the poor husband who has to smash into the damaged goods of a post-birth crotch. Unfortunately for everyone involved, a husband stitch often results in less sex for men because it’s so unnaturally painful for the woman being stitched.

She explained that a vagina is like an umbrella. It’s all closed up most of the time, but when it needs to let things through like babies and penises it can be easily opened, then shut again just like an umbrella. Do the winds blow it inside-out sometimes? Yes. But that can’t be fixed with a husband stitch. And if a woman ever feels like it’s like throwing a hotdog down a hallway, she should go to her doctor with that information because it requires surgery and physical therapy. But a husband stitch? That’s medieval bullsh*t.

Fortunately my natural birth with the surro baby didn’t require a single stitch, and my previous birth ripped open my husband stitch. I have healed in so many ways since then, and my sex life is back to normal. Maybe even better than ever since I have a painful perspective. But if I ever see that male OB again, I might just give him a wife stitch right in his d*ck hole.

More Like This
Sex And Mom Guilt: When I Date Someone New, Am I Cheating On My Kids?
9 Reasons Why Some Women Can't Breastfeed
The Morning Rush Is Parenting At Its Most Essential
Dr. Jill Biden Just Delivered Some Frank, But Powerful, Advice On Motherhood