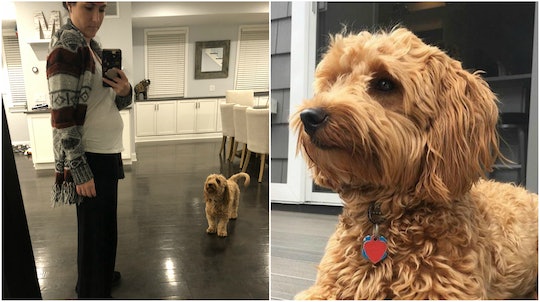 My Dog Knew I Was Pregnant Before My Family Did

Growing up, I was 100 percent sure I'd be a mom one day. To a dog, that is. My baby plans came later. And once my husband and I were sure we wanted both a dog and a baby, we'd add to our joint dog-and-baby name list over Sunday brunch or on date night. Maybe that's part of why my dog and my unborn child are so attached now, even as I'm only in my second trimester. It sounds woo-woo to say, but I swear my dog knows I'm pregnant.

No, seriously! From the minute I got that positive pregnancy test, my nearly 2-year-old mini goldendoodle, Benny, started acting differently around me. He's always been a gentle, cuddly puppy, but now he constantly wants to lie on my stomach or rest against me while we're on the couch. He follows me around the house in a sort of protective way, and he photobombs every bump update picture I take — watching me as I expose my growing belly.

Benny also has always had this nightly ritual where he'll start off in bed with my husband and I, but eventually jump off and cuddle up to sleep the rest of the night on the shaggy rug in front of our bed. He likes his independence, what can I say? But for the past few months, every morning around 4 a.m. — or, let's be honest, whenever I happen to wake up to pee that night — Benny stares at me as I walk to and from the bathroom and insists that I pick him back up on the bed to snuggle until my alarm goes off for work. I not-so-secretly love it all. I mean, just look at him.

Nearly every dog owner who responded noted that their pup started to act more gentle and protective before or immediately after they found out they were pregnant.

But maybe it's not such a crazy idea that my dog knows I'm pregnant, right? If dogs can smell cancer, help alert owners when a seizure is coming, and detect when blood sugar levels spike or crash in diabetes patients, why can't they also sense when a woman is pregnant?

I took to my What To Expect app message board — as one does — and started to investigate. Almost immediately, stories similar to mine started to pour in.

"I didn't find out I was pregnant until I was 6 weeks, but for the few weeks before I found out both my dogs were being more clingy," one user wrote. "Always by my side, followed me around even more, and wanted to sleep next to my belly."

"My Pomeranian lays her little head on my stomach whereas she never did before! It's precious," revealed another.

And the group discussion only got bigger from there. Nearly every dog owner who responded noted that their pup started to act more gentle and protective before or immediately after they found out they were pregnant. As if the dog had an intuition that something was up.

Well, according to Dr. Brian Hare, professor in cognitive neuroscience at Duke University and an expert on dog behavior (he also founded Dognition, which studies dog cognition), a dog might actually know something's up when you're expecting due to their sense of smell. Part of it might have to do with a change in scent due to increased hormone production, but your dog might also simply pick up on your happier attitude, body language, or the physical changes your body is going through.

"There is so much we still do not know about the dog’s sense of smell. We know that it is extraordinary compared to ours," Hare tells me. "Dogs are constantly surprising us with what they have been able to detect with smell, like several types of cancer and explosives. So it is not so far-fetched to say that dogs might be able to tell when a woman is pregnant."

And it's no surprise that millennials in particular are noticing this. Millennials have the highest rates of pet ownership of any generation, per the research firm Minter, which found that 75 percent of Americans in their 30s have dogs, compared to 50 percent of the overall population. For many millennials, pets are like a way-stop on the road to having a baby.

Dr. Richard A. Honaker, a family practice physician with over 30 years experience taking care of millennial moms, says that it's common for dogs to have an intuition — and get anxious or confused — when an owner is pregnant or brings home a new baby for the first time. "Hormones change a lot and dogs can sense that. Dogs have very sensitive senses. They detect changes in hormones, scent, and even body shape."

Given your dog's intuition for changes in your body, you should expect that the arrival of your baby will impact your pet, too. After all, though you won't love them any less, you will have less time to give your former only child as much undivided attention (and long, luxurious belly rubs!) after delivery.

So even if your dog seems to be acting friendlier during pregnancy, expecting moms should still "assume the dog will bite the baby," Dr. Honaker says. Some simple ways to ensure a happy relationship between dog and newborn? Besides watching for aggressive behavior and never leaving the baby unattended, Dr. Honaker recommends getting a baby doll to get your pup used to the idea before baby comes home.

According to the American Kennel Club, it's also a good idea to wean your dog a little from one-on-one time with you during the last month of pregnancy so there's less jealousy later. Getting your dog used to your baby's scents — shampoo, diapers — should also help. Your partner can help get the ball rolling by bringing home a worn piece of baby clothing from the hospital before you're even discharged to introduce your baby's scent.

So it's official: I'm not crazy and my dog's not some genius — he probably does know he's going to be a big brother. Or, at the very least, that something is different at home. Verdict's still out on whether or not he can sense my mom-to-be anxiety or dependency on googling before making even the smallest pregnancy decision, or is secretly judging how frequently I'm digging into the ice cream stash, but I'm certainly enjoying all of this mom-and-puppy bonding at the moment.

More Like This
My Nanny Showed Me How To Be A Mother
Infertility As A Stepmom Means Double The Alienation, But So Much Love
Adult Gymnastics Brought Me Back To Myself
This Mother’s Day, What I Hope For Is Resilience