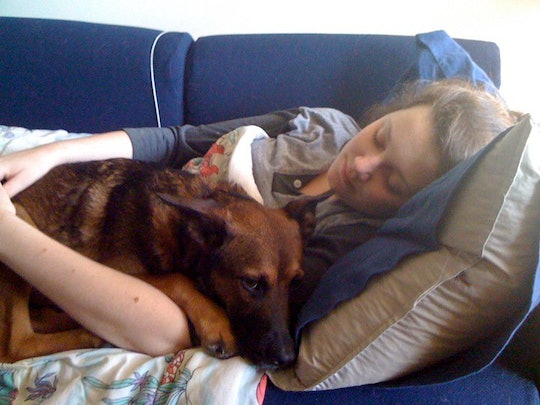 I Had My Dog With Me Through Labor, & Am Here To Say Doggos Make 10/10 Birth Partners

I have been very blessed in the support I've received during labor and birth. I've had three births. Each birth was different, but all three have been out-of-hospital, unmedicated births. And during all three, I was supported by my partner, my mom, my other children, midwives, and... my dog. Having my dog with me for labor was really soothing. So much so that I can't imagine facing my labors without him.

My dog, Tycho, is the only dog I've ever owned. I didn't grow up with dogs, but my partner did. The year before we got married, we got Tycho. To me, it was a big deal, and a big commitment. My partner and I were going to be together for the long haul, and we were sharing responsibility for this pupper 50-50.

We got Tycho when he was about 3 months old. He looked like a German Shepherd puppy, so we were surprised when he didn't get all that big. I had just graduated college and didn't have a 9-to-5 job yet, so I did the bulk of the housebreaking with him. He liked to be in the same room as me at all times. He's such a smart dog. He thrived on learning new tricks. He played hide and seek with us, he loved running around the park near our house. Along with being smart, he was also pretty high-strung. He had (HE STILL HAS) boundless energy. He tends to be anxious. Leaving him home when we were going places was really tough in the beginning. At some point, he took his role as guard dog pretty seriously and barked a lot when people were going past our house.

When I got pregnant with my oldest, he was about 2 years old — still a puppy in a lot of ways. I don't know what dogs really sense about pregnancy, but Tycho seemed to mellow out quite a bit in the nine months I was pregnant. He still barked at people who went past our apartment. He could still play fetch for hours at a time. But when I was resting, he was resting with me. He lived at my feet and would curl up under the covers with me.

Tycho was right next to the bed, and I was stroking his fur as the contraction intensified. When it finally let up, he huffed into my hand and I invited him up on the bed.

My first labor was very long. I woke up in the middle of the night on a Friday with contractions I couldn't sleep through. I didn't wake my partner up right away, because I knew it would be important for him to rest, and the contractions weren't close together yet. Who knows if it was the hormones, or maybe the strange way I was acting (breathing deeply and with great focus for a minute at a time when I was having contractions), but Tycho was totally focused on me.

I remember it being early in the morning when I had a contraction that was really intense. Tycho was right next to the bed, and I was stroking his fur as the contraction intensified. When it finally let up, he huffed into my hand and I invited him up on the bed. He didn't push his nose around or circle around a few times like he normally did to get comfortable. He hung out with me as the sun rose, and then I told my partner I was in labor.

The thing is, my first labor was really long. My mom was there, staying with us, so she and my partner took turns keeping me comfortable. My contractions were intense enough that I thought things would pick up speed at any minute. But all of Saturday passed without the contractions getting closer together.

Then it was Sunday, and I was exhausted, but the contractions were still six to 10 minutes apart. I was feeling so defeated by Sunday night. I couldn't believe I had another long night of pain ahead of me. I started catching cat naps between contractions, but it was never long enough for me to actually rest. My mom and my partner were sleeping for five or six hour shifts and I envied them so much.

My memories of the hundreds of contractions I had at home consist of the sound of my breathing, the strength of my contractions, and the feel of Tycho's fur.

But Tycho, even when he was resting, never left my side. He was there for every trip to the bathroom. He was there next to the couch, or next to my bed, or curled up at my feet as I bounced on my exercise ball. He has this thick coat of fur, and my memories of the hundreds of contractions I had at home consist of the sound of my breathing, the strength of my contractions, and the feel of Tycho's fur.

His presence was constant and calming, which is what birthing people really need in labor. In his first three years with us, Tycho was a lot of things: fun, loyal, intense, funny, but I probably wouldn't have described him as calming, at least not until I had gotten pregnant.

That first birth, I delivered in a birth center, and I remember that when it was finally time to go in (late Monday morning) I was utterly sad to leave Tycho. You know the worries that parents have when they are adding a new baby to the family, the worries about how the kids you already have will react? I felt that way about Tycho. Even though I might have bristled at the term "furbaby" and rolled my eyes at how sappy some pet owners get, I was really worried about the fact that Tycho was about to move way down on our list of priorities. Leaving my dog behind as I went to the birth center was pretty emotional. I knew I was leaving a certain amount of comfort behind, and I couldn't quite wrap my brain around the fact that when I was coming back, there would be a new baby with us.

Twenty-four hours later, we came home with our 12-hour-old baby in tow. My whole world had shifted. It takes no time to fall in love with your baby, and this tiny bundle was the center of my universe. Tycho took this with grace. He didn't seem surprised or thrown off by the presence of a baby.

Tycho accepted this new baby the same way he had accepted my pregnancy and my labor. He calmly gave my son a sniff, and curled up near the couch.

My partner and I had read up on how to introduce a pet to a new baby. We went through all the "right steps," but, honestly, I'm not sure it would have mattered. Tycho accepted this new baby the same way he had accepted my pregnancy and my labor. He calmly gave my son a sniff, and curled up near the couch.

As my son grew, Tycho remained calm and patient with him, even though he still barked ferociously at the mailman and chased balls or snowflakes with eagerness.

When I was having my second child, Tycho was about 6. He had mellowed out even more. For my second and third births, I delivered at home. This meant there was no emotional goodbye. It meant that Tycho could stay with me throughout labor and birth. And he did – just as steadfastly as he had with my first. When things got tough I was still comforted by petting him. And when it came time to push, he placed himself right outside my bedroom, standing guard.

My mom and my partner were so calm. I was calm in all of my births. I needed my surroundings to be just as calm. Somehow, even though Tycho loves barking at people walking by, he was quiet when I needed him to be. And he was also gentle and loving when he finally got to sniff the new babies for the first time.

The way he was with me during labor is the same way he is with my children. He has accepted that they are my new focus. He listens to their commands, even though they sound far from stern. When they are holding onto the leash, he doesn't pull (even though he still does with me and my partner). He puts up with tail pulling and rough hugs and fumbled attempts at riding on him. Tycho is a saint of a dog.

He's getting older now. His muzzle is graying and he spends more time napping than he does playing fetch. He has three kids who adore him and who don't know a life without a dog. Sometimes I wonder if I'd like another dog, but it's hard for me to imagine ever finding one as perfect for our family as Tycho is.

I know that, years from now, when he's gone, all of my memories of the births and early days of my kids are going to be full of Tycho. I can still so clearly remember that reassuring huff of breath that he gave me during my first birth. The experience of laboring is something so outside of our everyday world that it can throw you, throw your birth partner, and yet there in the moment, my dog totally understood.