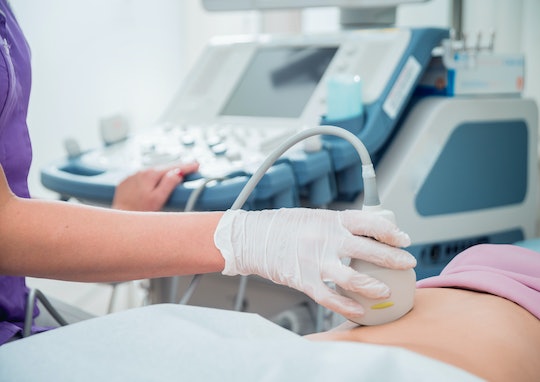 My Ex-Girlfriend Was My Ultrasound Technician & Actually, It Was Kind Of Perfect

When you live in a tight-knit community, everybody knows everybody else, and it seems like everyone is connected to each other in one way or another. That was already true of the circles my wife and I were running in (we had multiple friends in common years and years before we ever met), but it’s even more true when you happen to be queer. The world starts to feel extremely small, and her ex once worked on a community garden with my old roommate, and I used to have a crush on the girl who helped so-and-so adopt their dog. And it was in the context of this weird, intertwined, community, that my wife and I met, married, and decided to have a baby. So it just seemed hilariously natural when, of all people, my ex-girlfriend was the one to help us get our ultrasound done.

Of course, what made sense to us, in our weird little community, didn’t necessarily make sense to anyone else. When I told people about it, I got a lot of double takes. Everyone wondered how on earth such a thing could come about. To be honest, I didn’t go about getting prenatal care in exactly the most standard way possible. Having had some negative experiences with doctors in the past, and being fully aware of the fact that medical fat-phobia can make pregnancy and childbirth particularly challenging for fat women (of which I am), I elected to skip the OB-GYN altogether. I knew right away that I wanted to have a home birth if at all possible (in my case it turned out not to be possible, but that’s OK), so I did my research and hired a really amazing midwife. She was everything that I wanted, the perfect combination of no-nonsense scientific knowledge and “trust your instincts!” mom-centered ideology. She made sure I got my blood work done and we knew everything was normal, she listened to the baby’s heartbeat, and examined me regularly to make sure my baby was growing. But she couldn’t give me an ultrasound.

Despite knowing that my baby would probably be fine no matter what, I still kind of wanted an ultrasound. Maybe it was just because I’d always expected that I would have one, or maybe it was my own parental paranoia. I just wanted to see the fetus, I wanted to know that they were in there, real and solid, moving and alive. I didn’t care about whether or not they had a penis, I didn’t want one of those fancy 3D video ultrasounds, and I didn’t necessarily want a bunch of keepsakes from the event. But I did want to at least, as I put it at the time, kind of peek in there at our growing little one.

The problem was that I wasn’t exactly sure how to arrange that. And I was afraid that, if I went in through official channels at the standard time, a technician might accidentally reveal the apparent sex of our child. I was stressed out, and extremely sick, and I just wanted it to be easy. But it seemed impossible.

Despite how many times I’d been assured this wasn’t really a big deal, I had to admit, I was feeling all emotional and nervous.

Then, I got a message from my ex, who happened to be working for Planned Parenthood at the time. She had access to, and knew how to work, an ultrasound machine, and was more than happy to facilitate me taking a glance inside my own uterus. “It’s really no big deal!” she said. I was sold. She assured me that we weren’t about to accidentally find out anything about our little fetus that we didn’t want to know. “It’s too early to see a penis at this stage anyways,” she said, “and besides, even if it wasn’t, even technicians who are trained for it can’t always tell the baby’s sex; it’s actually really difficult!”

There we were in this little room: me, my wife, my ex-girlfriend, and a big honking machine.

We took the bus down to our local Planned Parenthood clinic, and no one offered me a place to sit down. The movement made me feel like I was going to hurl, but I somehow held it in. Despite how many times I’d been assured this wasn’t really a big deal, I had to admit, I was feeling all emotional and nervous. It didn’t help that I was also feeling very pregnant. I had to stop to breathe three times on the three-block walk from the bus stop to the clinic. Inside, my ex was all friendly and smiles. Any awkwardness I’d felt about interacting with her in this way instantly subsided. We chatted with a midwife she worked with at the clinic (she recommended candy for my constant nausea, saying casually, “you’ll have a few new cavities when it’s over, but it makes for a nice, sticky, baby!”) and then we went in the room with the ultrasound machine.

I was still feeling a little anxious. After all, this was the first time we were going to see our baby. And there we were in this little room: me, my wife, my ex-girlfriend, and a big honking machine. My wife had remained 100 percent comfortable with this weird set-up, with the idea of my ex being a part of this magical moment. Her attitude had been pretty much “if you’re comfortable, I’m comfortable," and as it turned out, I was mostly comfortable, but once we were there I was having a really hard time wrapping my head around the whole thing.

I don’t regret dating my ex in the slightest. She’s an amazing human being, but we really weren’t long-term compatible for two huge reasons: I desperately wanted to have kids, and she was just too calm, cool, and collected about everything for an incredibly anxious and uptight person like me to even be able to relate to her. Back when we were dating, I struggled with her ability to remain calm under pressure, because how would she ever understand me if she didn’t also struggle with anxiety? But in the ultrasound room, one calm person was seriously necessary. And then I got the best surprise possible: after helping me get set up correctly, she let me control the ultrasound wand itself, so rather than having this invasive thing done to me, I was looking for the fetus in my own uterus.

It took a little bit to find him, but then, suddenly, there he was, the teeny tiny thing that would grow into my baby, the person I love most in the entire world. He was tiny, he was perfect, and he would not stop moving. I heard my wife, next to me, gasp. Did all the air go out of the room? I honestly can’t remember. It’s hard to put words on that feeling that is both so primal (my baby!) but also strange and ethereal (the kind of technology that allows us to see our children before we give birth to them is still relatively new, in the scope of human history). What I remember is that I already felt proud of him, even though he was so new and I didn’t know anything about him yet. He wiggled his tiny fingers, and like any mother, I counted them.

“I love doing this,” I heard my ex say from the corner of the room, smiling at my wife and I, who were both on the verge of tears. We tried to get some pictures to take home, but because our particular fetus literally would not stop moving for two seconds, they were all blurry and ridiculous looking. But we took them and kept them anyways. Since we were in the neighborhood, we tried to stop by a friend’s house while we were out and I puked all over the sidewalk on the way.

Some people probably wouldn’t have wanted to share such a magical moment with someone they’d previously known in a romantic capacity. But for me, and I think for my family, it reaffirmed the bonds of community that make us feel good about the world. You can not want to date someone anymore, still care about them, and still wish them well. And in our case, that’s exactly what happened. Maybe that takes different forms for different people, and that’s fine. In our case, that bond helped facilitate the first time I got to see the child who has since completely taken over my life. And honestly, that seemed pretty perfect to me.

More Like This
Yes, It’s Possible To Get Pregnant If You Have An IUD
The 4 Main Parenting Styles & Which Is Best For Kids
21 Imaginative Boy’s Names that Start with “I”
40 Lovely, Lively, Lavish Girls Names That Begin With “L”