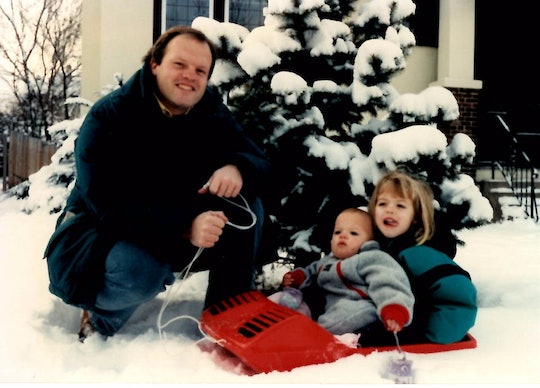 My Father Was One of the First Dad Bloggers

The boy I'd been embarrassingly in love with for the past year bounded up to me after a drama club meeting, more pleased with himself than usual.

"I see your dad wrote about me today."

I rolled my eyes. It didn't matter that my dad actually had not written about my crush, but a Minnesota Twins pitcher with the same name. I was 15 years old, and the novelty of being the daughter of a dad blogger had officially worn off.

My dad wasn't really a blogger in the technical sense. He'd started his parenting column in the early '90s, before most people even knew what the "web" was. His column, Go Ask Dad, appeared underneath Dear Abby and across from Calvin & Hobbes in hundreds of newspapers nationwide for about 15 years. It broadcast my every lost tooth, my every sex question, my accidents, my insecurities, my shames.

It wasn't until many years later that I realized that by publicly identifying himself as a Dad with a capital D, he was, in a way, a forebear of Dooce, Scary Mommy, and Go the F* to Sleep, and every wild-eyed parent at the end of their rope who realized that a well-placed Facebook rant could be a healthy substitute for driving their Cheerio-encrusted minivans off a cliff. Like the bloggers of today's internet, he etched his children's worst moments in stone for Internet eternity.

My father certainly wasn't the first to write about his own kids, nor was he the first to get paid for it on a regular basis. One of his most prominent progenitors was Erma Bombeck, who began her career in 1964 as a bored journalist-turned-housewife writing columns for $3 a pop. Millennial moms may not remember her, but she was, in fact, the ur-mommy blogger. At the height of her fame, she appeared in 900 newspapers; her books sold millions.

Bombeck, not surprisingly, had no male equivalent. In the Don Draper era, when fathers took the train into the city every day to go to work while their wives stayed home to cook and clean, there didn't seem to be much call for one. The rise of telecommuting and women entering the workforce, however, caused the number of stay-at-home dads to jump almost 50 percent since the 1970s, according to 2013 Pew Research data.

My father was a member of this first generation of stay-at-home dads. In fact, he did much of his work from home on a primitive Commodore from Radio Shack, which actually made him the most technologically-savvy father on the block. He was far more likely to be grocery shopping, vacuuming, or helping us with our homework than he was to be out navigating the corporate rat race. My mother went back to work around the same time the column started, and writing it remotely allowed him to be home with us more often.

By the 1990s, perhaps as a byproduct of the millions of women who had entered the workforce ( from 51.5% in 1980 to nearly 60% in 2000), dads had taken their place as the preferred pop culture punching bags of choice. They were often portrayed on TV shows and commercials as drooling, incompetent nincompoops incapable of mastering even the most basic household tasks. It was the era of Homer Simpson and Al Bundy.

Agency was starting to become of the utmost importance; I wanted to have the ability to shape myself and choose how the world saw me. Every time he wrote about me, he was taking this agency away from me in a uncomfortably public way.

In his columns, my dad both embraced and subverted this stereotype. He frequently poked fun at his own haplessness, deferring to my mother (the designated Voice of Wisdom) at almost every opportunity. Like Bombeck, he got paid to write — not in free products or "exposure," but in cold, hard cash. His columns went viral when "viral" still sounded like something horrifying. When he wrote about taking shelter at an American Indian casino after getting chased out of a state park by swarms of mutated mosquitoes, the same plot showed up six months later in an episode of The Simpsons.

For the most part, I liked reading about myself, or at least the version of myself my father chose to portray — an unpaid, unscripted character in our family's domestic drama. My persona changed from column to column: sometimes I was a pint-size spitfire showing up the adults with my clever quips, other times I was a gracious yet endlessly put-upon player in events beyond my control. I was half Stephanie Tanner, half Jane Eyre.

"How is this generation of children going to feel as they reach adulthood and confront legacies of their past preserved in the amber of the Internet?"

But I'd be lying if I said that sometimes, his columns didn't embarrass me. It was often the little things he wrote about, like the way he misquoted me about why I quit tennis lessons, or his claim that I had an odd habit of sucking my lip when I had a canker sore. At the time, I was a budding writer myself, and agency was starting to become of the utmost importance; I wanted to have the ability to shape myself and choose how the world saw me. Every time he wrote about me, he was taking this agency away from me in a uncomfortably public way. And when teachers, on average of once per week, would read his column and ask me how it felt to live my life in public, I shrunk as deep as I could into my seat.

I once asked him why he overshared so much about our personal lives, even if he suspected we'd be embarrassed by them when we grew up. "If I steered too clear of moments or subjects that had some potential for regret, I wouldn't really be getting close enough to the essence of being a parent," he said when I brought up the subject. In other words, he went full speed ahead and hoped for the best.

Parents these days like to promote self-determination, by doing things like eliminating gendered toys and letting kids choose their own hobbies and extracurriculars. But just because you're not forcing Junior to live out your own thwarted fantasies of going All-American or dancing at the Bolshoi, that doesn't mean you're still not subsuming your child's identity in subtle ways, especially when visions of clicks, comments, and ad revenue dance in front of your eyes.

If you rely on your kids for a continuous RSS feed of material, it's only fair to give them a voice at the table.

Today, an estimated 3.9 million American moms identify as bloggers. They are no longer glugging down asti spumante in the silence of their kitchens to deal with the stress of it all. And they're sharing what it's like — every mind-numbing, booger-filled minute of it. They're also opening up a vein or two and writing confessional pieces with headlines like "Honestly, I think my baby is ugly!" Sometimes, I wonder if they've thought that decision through: after all, presumably one day, that baby is going to learn to read. And we haven't really discussed what the consequences for these kids are going to be when they grow up and start Googling their own names.

“The real problem for mommy blogging," wondered S.E. Smith in her piece for The Daily Dot, is "how is this generation of children going to feel as they reach adulthood and confront legacies of their past preserved in the amber of the Internet?" Thanks to my dad's career, I feel like I know the answer to this question.

Although they largely predated the era of Internet amber, many — though not all — of my dad's columns are still around. Sure, he never used my photo or my name, but because he himself was and still is a public figure, and because I myself have chosen to put my story out in the world, there’s never really any shaking it.

Just a few months ago, I was Googling myself when I came across a grainy microfiche of one of my dad's old syndicated columns, section B4 of the Tampa Bay Tribune, right below Dear Abby, as usual. It was that happy day when I received my preordered two-tape copy of Titanic on VHS, and there we were, after all these years, watching our favorite couple steam up that Stutz-Bearcat all over again, my dad awkwardly cracking jokes about Leo's lack of facial hair while I sat there gazing at the screen, trying to ignore the alien tingling in parts unmentionable.

His words were a scrapbook worth preserving, no matter how painful, and I can't help but wonder if the mommy blogs and parental Facebook posts of the future will serve the same purpose as the family album one day.

From where I stand today, I like to think I can regard this type of thing from the viewpoint of a mature, rational adult. But I don't know if every kid whose parents write about them feel the same way. After all, as I can tell you, it's the littlest things that can trigger invisible insecurities. Bottom line? If you rely on your kids for a continuous RSS feed of material, it's only fair to give them a voice at the table.

My dad did pull back a little as my brother and I orbited into our teen years, the focus shifting away from the confessional Dear Diary technique to an exploration of broader parenting issues. When I read his earlier pieces, I can;t bear to read them sometimes, but I do. His words were a scrapbook worth preserving, no matter how painful, and I can't help but wonder if the mommy blogs and parental Facebook posts of the future will serve the same purpose as the family album one day.

So let me reassure today's mom and dad bloggers that if your kid does end up hating you, it's far more likely to be because of something you did to them, rather than something you wrote about them. A bad parent is a bad parent, whether publicly or privately. And I don't hate my dad. I love him for showing me it's possible to make a living as a writer, and for being a pioneer in his own right. My dad tried his best, and he ended up getting it right most of the time. That was enough for me to overcome my humiliation.