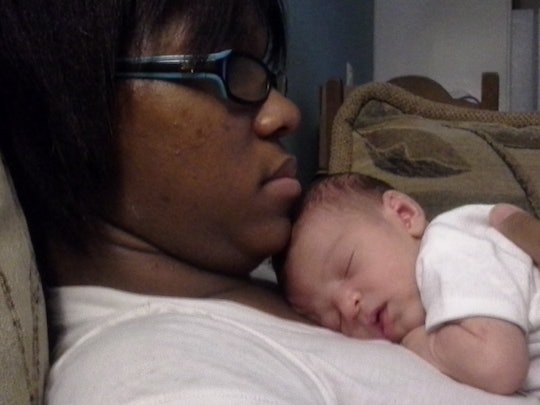 My First Postpartum Poop Was An Absolute Nightmare

"What are these?” I ask the nurse as she hands me two small pills.

I was confused. I didn't understand why she was handing me take stool softeners at that moment, but I quickly figured it out. There I was, sitting in my hospital gown only a few hours after having a baby. I had the urge to go, but nothing was happening, no matter how hard I tried. And believe me, I tried hard.

Without going into graphic detail, after the nurse gave me the stool softeners, I spent about 20 minutes sitting on the toilet, silently praying for release to come while also thanking God that I had a private room. I couldn't quite put my finger on why I was having so much trouble, but I felt betrayed that no one had really told me about this. My first postpartum poop was a nightmare, and I wish someone had warned me about it.

I had tried to read as much as I could about being pregnant and what kinds of changes my body would be going through, both physical and emotional. Somehow, though, I didn't think to do research on what comes after labor, and boy, I wish I had. I had learned in my childbirth class that the same muscles that you use to take a poo are the same muscles that will successfully help you deliver a baby. I had also done Kegel exercises, which are contractions of your vaginal and pelvic muscles to strengthen your body for an optimal birthing experience. But while my Kegel muscles were champions in the delivery room during my drug-free delivery, they failed me in the bathroom.

When I sat down to poop, my entire body seized.

I had a wonderful birth experience; my body was really in the zone, and as a result, I was lucky that nothing tore. My first post-delivery pee stung only a little bit, so I figured that going to the bathroom would be a breeze. But when I sat down to poop, my entire body seized. I was so terrified of the potential pain that I couldn't do ANYTHING but sit with my head between my hands alternately clenching and relaxing my sphincter. Eventually, I gave up and vowed to try again the next day. "Maybe after I got some rest, I'd feel more up to it," I decided.

Yet rest did not help. I took two more pills, drank some water, and waited.

I later found out that this whole not being able to poop thing (I believe the quote-unquote scientific term is “postpartum constipation") is totally normal. Chances are that during labor, you really worked out those muscles and they are simply too tired to work more, which explains why it's so difficult to poop right after childbirth.

In the meantime, I decided to text my best friend. She had only given birth two weeks before, and while she had a c-section I knew that she would be sympathetic to my plight. As it turned out, she too had struggled to poop immediately after giving birth.

“Girl, I had to lie to the nurses," she told me. One of the conditions of her release from the hospital was that she make a bowel movement. She told me that she tried, but everything hurt too much, so she just stayed in the bathroom for a while and told the nurse that she went. They never checked, and she went home and did her business on her own toilet while hugging a body pillow.

So I tried again. And once again, my entire body seized. I guess my muscles still remembered what I had put them through with labor and refused to cooperate. There was a chance that my body was still tired and couldn’t muster up the strength to work just yet. I had put my body through enough stress with a drug-free delivery, so I didn't want to push it to do anything else.

While my Kegel muscles were champions in the delivery room during my delivery, they failed me in the bathroom.

Eventually, I gave up on pooping in the hospital. Armed with a fresh prescription for more stool softeners, I figured that I'd have better luck in my own bathroom. I popped a few pills every few hours, and took my iPod into the bathroom to distract myself. While Justin Timberlake serenaded me, I sat and pushed as much as I could, pausing frequently to take a breather. Finally, after what seemed like hours, the elusive poop finally came. I emerged from the bathroom, sweaty and shaky but victorious. It was like giving birth all over again.

I was lucky that it only took me a day or two to poop postpartum. My friend Alicia later told me she didn't poop for almost 9 days after she had her son. "I was too scared to go because of all the stitches and I was afraid to rip them," she said.

"I got things about halfway out and then everything got stuck."

My friend Jackie, who had a c-section, went off her stool softeners and tried to poop shortly after coming home from the hospital, which turned out to be a big mistake. "I got things about halfway out and then everything got stuck, so I couldn't push out but also did not have the muscles to pull it back in," she said. "I have never psyched myself up so hard. I had to slowly, millimeter by millimeter, pull it back in. It took forever, then I went back to bed and had poop dreams. I went back on the pills the next day," she said.

While most baby books discuss literally every other possible side effect of pregnancy and childbirth, no one really talks abou postpartum constipation. Well, I'm here to tell you that it's very, very real. It's also largely mental: after undergoing an experience like childbirth, the anticipation of pooping scares moms so much that we're almost too anxious to try. The key to success is to relax as much as you can — and, also, to take the stool softeners.