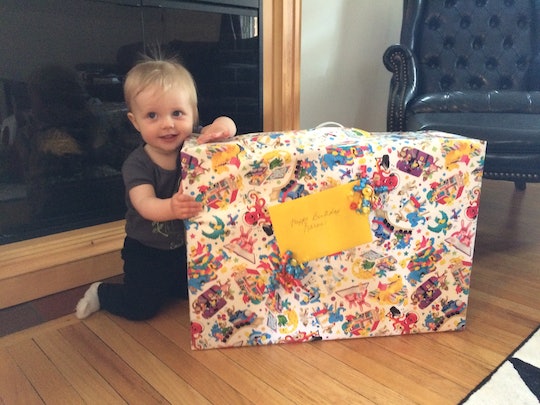 This probably comes as no surprise to anyone, but it took having a baby for me to figure out that there truly are not enough hours in a day. Pre-baby Me measured time in units of books read, shifts worked, and television shows binged; when I look back now it feels like time was measured in time wasted. Now, I measure time in units of breasts milked and sleep lost, laundry loaded and meals missed. But if this first year of parenting taught me how little time I now have, then it was also becoming a parent that taught me how truly valuable my time is.

On any given day, I wear many hats: Mom Hat, Wife Hat, Writer Hat, Student Hat, and Friend Hat. And then the hat that gets worn least often: My Hat — the hat that I wear just for me. All of these different hats, sometimes worn simultaneously, mean not only am I busy, but also that I've been stressed out, run down, overwhelmed, and just plain tired in the past 12 months of my life. A new mom feeling stressed out isn't news. A new baby can throw even the most organized of households into upheaval. Nor is the idea that, generally, women stretch themselves too thin. I'm not the only person who has too many hats to wear. But, for me, all this came to a head about a month ago. I was passing messages back and forth with another mom friend and she asked if we could get together soon. And, honestly, as horrible as it sounds — because she is a wonderful person — the idea of adding another commitment, another relationship, another hat, was so overwhelming to me that I felt suffocated. I wanted to say no, we couldn't get together.

In that moment, I wanted to know when it would end. When would I stop being pulled in all of these different directions? When would it all get easier? But as I looked back I realized I was the one to blame for filling up all of my time. No one made me as busy as I am. I chose to do it all, and I was quickly learning I was having a really hard time keeping up.

I decided to become a parent — arguably the most stressful, tiring, time-consuming job on this planet — because I was ready to open my heart to the absolute joy of being that little girl's mommy.

I'm sure if you ask any woman with a kid (or kids), she'll tell you being a parent — especially in the first year — is exhausting. It's true, but I still chose to be one. I chose to go back to school (part-time, online) when my daughter was only 4 months old. I chose to start freelancing. I chose to train for a half-marathon. I chose to make myself busy and that made it hard for me to justify saying no to adding another hat to my head.

I'm training for a half marathon because my partner is an endurance athlete and I used to be a runner. After the birth of our daughter, I felt like our relationship was changing, slipping through my fingers no matter how hard I closed my fist around it. I wanted something I could cling to, something we could connect on, that we both had in common. I chose to train to run a race for our relationship (which now seems so silly written out in black and white), but also for me. Because it was something I could do to fix it. I started freelancing and went back to school because I finally had the spark that motivated me to want to be more than the person who slogged through her day doing something she liked but didn't really love. I want my daughter to grow up watching her mother be the happiest, most fulfilled version of herself, even if it means that sometimes that version is tired and overwhelmed and busy. I decided to become a parent — arguably the most stressful, tiring, time-consuming job on this planet — because I was ready to open my heart to the absolute joy of being that little girl's mommy.

I said no to the things that were going to take time away from my daughter, my partner, my writing, my life. And the simple act of saying no was so freeing that I didn't feel like I was suffocating anymore.

So, when my friend asked about getting together, I told her how busy I was. Then I told her no, we couldn't get together. And it shocked me when she commiserated and agreed. That's how I realized, I can say no. I don't have to justify it. I don't even have to feel bad about it. Because I am allowed to say no. All of these units of time, measured by being a mom, being a wife, being a writer, a student — being me — all of them are valuable because they are mine and I am valuable. I chose to do them all in my first year of parenting and so I can also decide what is worth my time and what isn't. And I choose to say no, just for myself, just because, whenever I want. And I didn't just stop with a playdate.

It took pushing a baby out of my body to realize that all of these accomplishments, all of these assets, aren't as important or as valuable as the time I spent achieving them.

I started to say no — to dinners that sounded lovely but not as lovely as going to bed early; to visits from family because I just didn't want to host; to making dinner and letting my partner do it instead. I said no to the things that were going to take time away from my daughter, my partner, my writing, my life. And the simple act of saying no was so freeing that I didn't feel like I was suffocating anymore.

This year, I'll turn 30 years old. I have a Master's degree. I am married. I have visited 12 countries. I have a fulfilling career. And I have hosted three holiday dinners. But it took pushing a baby out of my body to realize that all of these accomplishments, all of these assets, aren't as important or as valuable as the time I spent achieving them. And it took having none of that time left for me to finally realize that I am ready to fight for it.