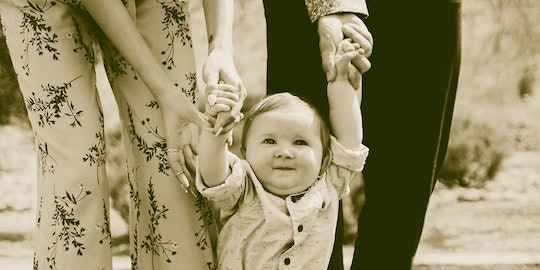 Because sitting down to pen the most hopeful application of your life — and realizing the entire damn thing hinges on your inescapable personality — can be stressful, we bring you a brutally hilarious adoption application by Leah Campbell, written for a hypothetical world in which we could be so honest.

Hi! We’re Sarah and Jeff — two mildly attractive suburbanites who desperately want your baby. Of course, it doesn’t necessarily have to be your baby. We’ll take any baby, if we’re being honest. But ideally a baby with good hand-eye coordination, an appreciation for David Hockney, and the ability to secure a scholarship to an underrated liberal arts college. Maybe even the kind of baby who is born loving Arcade Fire over Peppa Pig.

Of course, we put all that on the form with the adoption agency we just wrote a $20,000 check to. So you don’t really need to know what kind of baby we won’t take. You just need to know: We want your baby. Or any baby. If you know someone else with a baby to give away, send them to us. We can give you cards to hand out to your other knocked-up friends if you want!

Why We Want to Adopt

I (Sarah – hi! I’ll be doing most of the writing here. Jeff says it’s not really his thing.) always knew I wanted to be a mom. From the time I was a little girl, I was swaddling small animals (kittens, puppies, chickens… you get the picture) and carrying them around like babies until they scratched or nipped or pecked their way free.

Unfortunately for me, I spent my 20s and early 30s in a dead-end relationship with a total loser who just would not commit.

I’m also pretty sure he gave me HPV, but everyone has that now... right?

Anyway, just before my 30th birthday I gave that asshat an ultimatum: Put a ring on it or I walk.

Let’s just say he didn’t put a ring on it. And I walked. Three years later.

Would you believe that jerk got engaged to someone else six months after that?

I stalk them on Facebook sometimes, and they’ve already got two kids and a basset hound. The dog looks overweight, though, so I’m thinking they must not be happy because clearly they aren’t getting outside to take that thing for walks.

We got married just after I turned 35 and started trying for babies right away (I mean, tick tock, right?. But as much fun as we were having, nothing seemed to be happening.

Weird because we are such charming hosts on July 4.

So here we are, hoping to finally make our dream of parenthood come true with a baby we can buy.

Not from you, of course. That’s not what we meant. It’s illegal in this state to pay people for their babies, so please don’t ask us for money. We would never break the law. It’s just that, we gave the adoption agency all our money. So we’re really hoping this pans out.

Look, let’s be honest: If you reach your 30s and you’re still single, it basically becomes like a game of musical chairs to find out who gets a life partner and who winds up standing all alone in the center. We did not want to be those people. So… we settled.

It’s not all bad. Jeff makes good money and always lets me pick what we watch on TV, and I learned that putting together a wedding registry is just about the most fun a person could ever hope to have.

We like each other. Most days. And that’s more than most couples have, right?

Sure, our sex has become entirely about making babies, and I was more than a little horrified when I accidentally peeked at Jeff’s search history, but… we’re happy.

We just need a baby to be happier.

I’m not going to lie to you: Jeff’s mom is the worst. Like seriously, the worst. My MIL drops in uninvited, moves things around without asking, and is constantly making underhanded comments about my body and the fact that we don’t have kids.

Last Thanksgiving she suggested that I might want to skip having dessert because, “On the lips, straight to the hips, dear, and you know what they say about fertility and maintaining a healthy weight.”

She’s lucky I didn’t sabotage her Fitbit steps goal while she was washing up (“You’re DONE, Diane.”).

Thankfully, my parents are amazing. So your kid/our kid/whatever we’re calling this kid right now would have at least one set of incredible grandparents to dote on him or her (by the way, is it a him or a her? Because I kind of have my heart set on a little girl… but I’ll take whatever you’ve got!)

I teach English to seventh graders, which I really think has prepared me for motherhood, even if it has created a situation where it will be near-impossible for me to name a baby. You know that thing where, when you’re thinking of names, if you know someone you don’t like with that name you just can’t use it?

Yeah, as a seventh grade teacher, I’m pretty sure there’s not a single name you could ever think of that’s not attached to a kid who was an ass to me at some point or another.

Still… I love my job! LOVE.

Jeff is a lawyer. He works long hours and makes the big bucks. You know he makes good money because the firm he works for defends people who club baby seals. Or something like that. Either way, he makes enough that we’ve decided when we do start our family, I’ll quit my job and stay home to take care of the baby.

Which I’m really looking forward to because babies aren’t seventh graders. (I figure Jeff can take over when it gets to that stage, and I can start wearing boxy linen and going on women’s retreats.)

We’re going to go ahead and tell you we’re Christians, because that was like the number one requirement of the adoption agency we’re working with. But between you and me, we haven’t been to church since our wedding. It’s not that we don’t believe. I suppose we do kind of passively. It’s just that we tend to drink pretty heavily Saturday nights, and sleeping in on Sundays is kind of our way of worshipping.

Ummm… yeah. Did I mention I work with seventh graders? The most vulnerable cohort due to their love of the MTV Teen Choice Awards.

Look, we were told to brag about our volunteer work, because apparently prospective birth mothers like to hear about what great people their potential adoptive families are. But you don’t buy into all that, do you? I don’t know a single adult who actually volunteers in real life. Who has the time?

If you need us to write a check to the organization of your choice just to get some warm fuzzies about what good people we are, though, I’m all over that. You just tell me when and where and I’ll make it happen!

Failed baby-making, binging The Handmaid’s Tale and 13 Reasons Why, making cookies that never get baked (because… cookie dough), cuddling with our three fur babies (Roxy, Felicity and Hank — aren’t they just the cutest?!?) and mindlessly scrolling Instagram.

Wine-o-Clock is also a crucial part of our daily schedule, and boozing starts at noon on weekends. But we’re totally willing to cut that down if someone would just give us a damn baby already.

The Life We Would Give Your Child

Look, we’re not perfect. Obviously. And you know what? No one else is either. I don’t care what you’ve read on those other adoption profiles: They’re all giving you the very best version of themselves. When the truth is probably a little closer to our reality than any of them would ever admit.

But we’re good people. And we have an OK marriage. More than anything, we both really want to be parents. And we would be good parents.

Probably not perfect parents. I can’t promise that I won’t ever hide in the bathroom or Jeff won’t ever lose his cool over something stupid. But we will both love your child with all our hearts. We will sign her up for baseball practice, or himup for ballet (no gender programming here! we’re all about equal opportunities) We’ll read stories every night (or at least most nights) and hold them close and keep them safe and tone down the drinking and the bitterness which we really feel like we’re kind of entitled to right now because… infertility is a bitch.

But seriously, we may not do loads of volunteer work or have this life all figured out. But we promise to ensure your child will always feel safe and loved.

And isn’t that enough?

All images sourced via Fotolia.