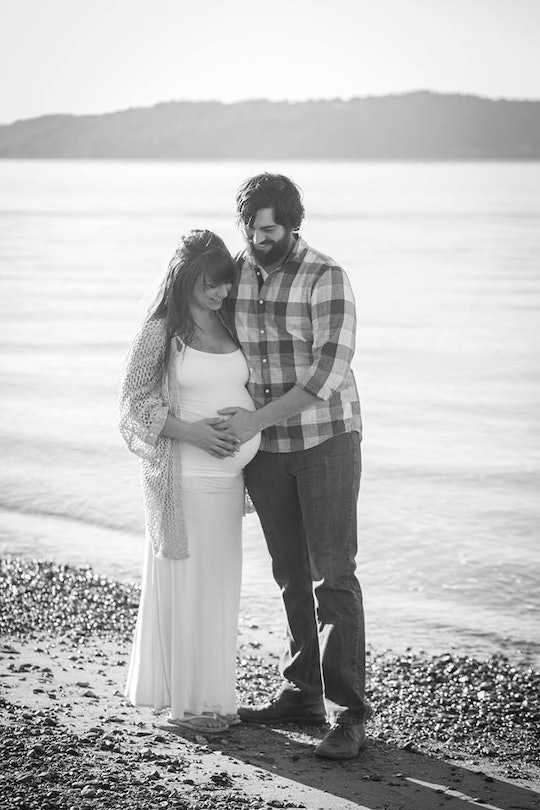 My Horrible Pregnancy Ruined My First Year As A Mom

The "silver lining" of any pregnancy is the inevitable birth of a healthy baby. At least, that's what I was told when I announced my unplanned pregnancy to friends and family. I knew I was ready to be a mother, but I didn't realize that maybe, just maybe, I wasn't entirely ready for pregnancy. Or, really, just my pregnancy, because my 40+ weeks weren't easy and they weren't smooth and they weren't the all-around amazing experience so many mothers promised me they would be. My pregnancy was horrible, and because I hated being pregnant so much, it ended up ruining my first year of parenting.

That's not to say that my son's first year was awful and I was absolutely incapable of feeling an ounce of happiness during the first 12 months of his life, because I was. I was able to laugh when he did something hilarious, cry tears of joy when he reached a monumental milestone, reminisce when he grew out of newborn clothes — I had and felt all the common responses most parents have to relatively universal moments of parenthood. However, even at the most happy, fulfilled, emotionally charged moments, there was fear. And that fear never left me.

The fear of my pregnancy lives comfortable in our home even now, two years later, right behind my subtle laugh and hopeful sighs. It harasses me when my son eats well, or when he refuses to eat; when he sleeps for an extended period of time, and when he refuses to sleep at all. It causes me to triple-check his carseat and obsess over food labels and reminds me that I'm a mistake away from a completely and inexcusable disaster. It whispers percentages and chances and very-real scenarios in which I could lose my son, because I am no stranger to that type of devastation.

I lost a baby before, and I couldn't bare even the fleeting thought of losing another.

I was initially pregnant with twins, and lost one of my twin sons when I was 19 weeks pregnant. For reasons doctors couldn't tell me and nurses couldn't explain, my son's heart simply stopped beating, and I was forced to carry his diminished body until my remaining twin was ready to be born. I was hospitalized for one week with a severe blood infection when I was 14 weeks pregnant, a complication that endangered the lives of my unborn children as well as my own.

After I was released from the hospital, I lost my job, and my employers cited my "condition" as "too unpredictable." I slid on the ground of a vacated office, crying to my partner through a battered iPhone, unsure about our rent or bills or potential future. I was scared and stressed, anxious and somewhat depressed; unsure of the life I was able to give my unborn children. There are moments in my life still where I wonder if that stress and anxiety is why one of my twin sons died long before I ever had the chance to meet him.

Every week, for 20 weeks, I went into the hospital to be monitored because I was at risk for pre-mature labor and a slew of other potential complications. I was acutely aware of how quickly things could take a turn, because they already had. After 39 weeks of a painstaking pregnancy, I birthed a son who would cry and open his eyes and breastfeed, and a son that never would. I said hello and goodbye in the same breath, unable to detach myself from pain and pure joy, so I let them mold into an overwhelming emotion that has no name. An emotion I hope never to experience again.

I'm afraid that I lost that twin for a reason; a reason that would make me unworthy of my remaining son's life. I'm afraid that my happiness is simply too good to be true, and the other shoe will drop and, with it, my life as I now know it.

And all of these feelings — these moments in my pregnancy, my labor, and my delivery — attached themselves to my son's first year of life. I couldn't sleep, for fear he wouldn't wake. I watched him too closely, worried too frequently, held my breath all too often. His health and continued happiness became my only concern. I lost a baby before, and I couldn't bare even the fleeting thought of losing another.

I'm afraid that I will let my horrible pregnancy ruin more than just my son's first year of life. I'm afraid that this debilitating angst will keep me from enjoying another potential pregnancy.

So even the happy moments — the picture-perfect moments of a day at the beach, a day at the park, his first steps, or a trip to grandma and grandpa's — was tainted by fear. I am always, always, afraid. I'm afraid that I'm a bad mother, and every pregnancy complications and subsequent loss was, in fact, my fault. I'm afraid my son will be taken from me with such swiftness, such surprise, such hateful and unabashed recklessness that I will never fully recover. I'm afraid I was given something I don't deserve. I'm afraid that I lost that twin for a reason; a reason that would make me unworthy of my remaining son's life. I'm afraid that my happiness is simply too good to be true, and the other shoe will drop and, with it, my life as I now know it.

But mostly, I'm afraid that I will let my horrible pregnancy ruin more than just my son's first year of life. I'm afraid that this debilitating angst will keep me from enjoying another potential pregnancy. I'm afraid that it will cause me to smother my son too much, as I grow dangerously close to becoming an over-protective parent who cannot seem to let go when she needs to most.

My horrible pregnancy made me feel afraid, all the time. But in some ways, it's also made me acutely aware of my fears. For that reason, and likely that reason alone, I've learned to stop and savor the moment, the smell, the sweetness of my little boy. I had a complicated, terrible, horrible pregnancy, and I lost a piece of my heart I'll mourn all the days of my life, but I am still a mother. Because of that, I push past the fear. I stand taller. Braver.