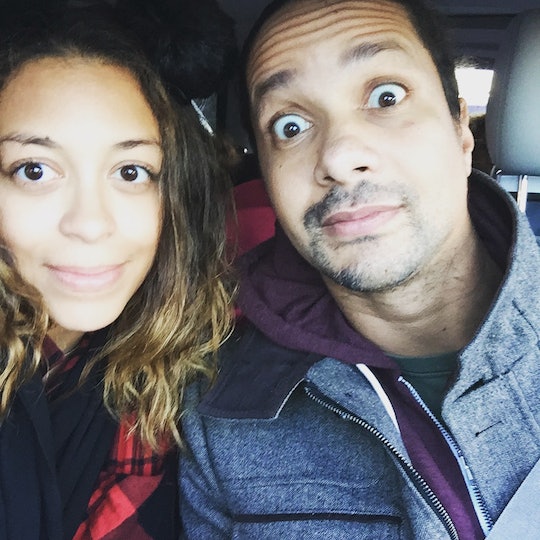 Meet a new couple or group of people and you will eventually land on the question of how you and your partner met. Whenever people ask me this question, I get a little glint in my eye and look over at my husband — who is a bit older than me — who smirks and waves his hand to tell me “Go for it.”

This is usually how I start.

“Well, his first wife used to babysit me...” and what follows are bug-eyed emojis and dropped jaws as people look at my husband with a brand new face. And all of a sudden that "robbing the cradle" joke isn't so funny. Once I stop laughing I eventually tell them the complete story. Which is this:

My husband’s first wife may have possibly babysat me and my sister. All I know is my husband and I went to the same church when I was little and while my parents did various church work, a group of teenage girls kept my sister and I busy dressing us up in paper towels in the bathroom. Of course, I wouldn’t stake my life on the first wife being a part of that group…but I’m also not going to pass up a chance to use this to pepper our story a bit.

But obviously, with a 13-year age difference between me and my husband, our love story didn’t begin there. It started in a much more conventional and traditional way, circa 2006, on MySpace...

It was the eve of my nineteenth birthday and he was a month shy of turning 32. When I told my parents about the blast from our past that I met on MySpace, who was just a teeny, tiny, bit older than me they threw their hands up in the air and walked away. OK. Not really but they weren’t entirely thrilled. Until they met him and realized he was pretty great, and wasn’t it dearly departed Aaliyah who sang “age ain’t nothing but a number” I reminded them?

When we first got together, people assumed that there was nothing more to our relationship other than pure lust, because we couldn’t possibly have anything in common.

When people meet us you may not at first glimpse that there is a huge age difference between the two of us. That could either be because my husband looks younger than his 1974 birthdate or it could be that I look a lot older than my 1987 birthdate. Who knows?

When we first got together, people assumed that there was nothing more to our relationship other than pure lust, because we couldn’t possibly have anything in common. And that once that lust and the magic of a new relationship wore off we’d be stuck with nothing to talk about. Both of which have proven to be completely inaccurate stereotypes of our May-December relationship.

I have an old soul. Even as a tween I gravitated and connected more with older kids and was always more interested in the older boys than the ones my age. My husband isn’t the first older guy I’ve been with either and he won’t be the last. Ba duh bump. But just because I’m an old soul doesn’t mean it’s because I’m trying to match his spirit either. He’s in the music industry so he is around young people all the time, which I think helps keep him “young” minded. He knows more about current trends and slang than I do. We like the same music, TV shows, and movies. The picture people have, of me relaying gossip from TMZ while my husband leafs through his copy of the New Yorker just isn't correct — my husband usually knows more about celebrity gossip than I do.

People often ask him if he’s worried that I’ll eventually resent him for “stealing” my youth or one day up and decide that being tied down with four kids and a guy who’s almost 50 (OMG!) is more than my early 30-year-old self can handle, then skip town in search of a party like Monica Gallagher (we’ve been binging Shameless lately). But I grew up in a Christian environment where young marriage and motherhood were applauded and encouraged. And other than resenting the modesty clause that prevented me from rocking a midriff back when I had a flat tummy (TOO LATE NOW, MIDRIFF TOPS), there are no resentments about what could have been.

Another thing people assume because of our difference is that he gets to pull rank in the relationship because he’s much older. But in our house we operate under the rule of "beauty before age," so that means that I run the show. There is no improper balance of power because of the age factor. I mean there probably is a slight imbalance in power that tips more to my side than his (but I will never admit that to him). For those six-and-a-half days that we’re happily married each week, we have a beautiful partnership where neither of us has more than the other.

Our age difference has never bothered us and is just as normal as any other relationship out there with only one glaringly obvious difference. And that is that, soon, when we go out with our younger matched couple friends, we’ll get to use his AAPR membership benefits to save a bunch of money and they won’t. Who’s laughing now?

More Like This
What To Write In A Valentine’s Day Card
Soul Ties: What Does It Mean & How To Know If You Have One
Here’s Why You & Your Mom Can Fight So Much
140 Quotes About Love To Make You Swoon
What Parents Are Talking About — Delivered Straight To Your Inbox