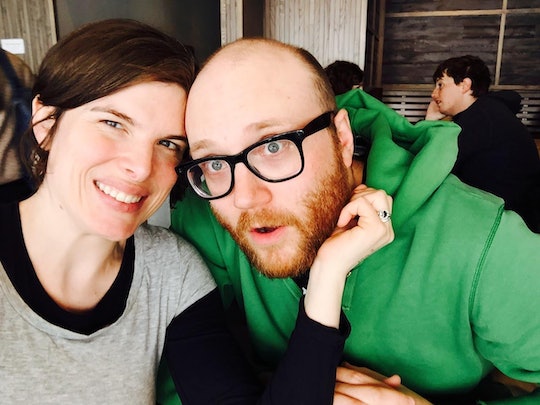 My Husband Is The Best Stay-at-Home Mom Ever

The happiest time of my life was the two years I spent as a stay-at-home mom. I was my son Harvey's primary caregiver from the day he was born to age 2. I put him down for naps and read him his first books. I nursed him through colds and teething pain. I lived for playdates and baby classes. As stay-at-home moms went, I felt like one of the best, and I loved it.

But when my husband confessed that his day job was killing him and he needed a change, I knew that going back to work was the only answer. We’d always kicked around the idea of trading off primary care-giving duties –although I admit I’d never actually thought he’d take me up on it. Luckily, I found a job right away and in Oct. 2014, I drove to work for the first time in a long time, leaving my toddler son in the arms of his dad. I thought it would last maybe 6 months.

Well, three years (and a second kid) later, my husband is still a stay-at-home parent. And I’m not even mad. Why? Because he’s freaking awesome at it.

Justin does everything that I did, just as well as I did. From booking playdates and doctor appointments, to attending baby classes and putting the kids down for naps, he took being a stay-at-home parent to the next level.

One summer, when we only had one car that I used to commute to work, my 6’5” husband spent three months biking Harvey around local playgrounds on my small lady bike. When Harvey started pre-school at a co-op 30 minutes away, Justin was the one who drove him there every school day for two years. He was the one who got to know all the parents and teachers, and he built an amazing community for our son’s class. And once we had our feisty daughter Mabel and she was thrown into the mix, Justin learned to successfully juggle two children at once — a feat that took me literally a year to master.

I would argue that cooking dinner is a task no person taking care of two kids all day should ever be expected to do. But he does it, because he is just that great.

Justin also maintained Harvey’s friendships with other kids, bonded with my parent friends, potty-trained Harvey before he was three, taught him how to read and do basic math before he was four, taught Mabel 65+ words in baby sign language, and introduced his kids to the Violent Femmes, to name a few other super-dad accomplishments.

On top of all that – he makes us dinner every single night.Let that sink in for a moment. I come home from a day at the office to a home-cooked meal on the table every day. Not only is that something I never did when I was a SAHM, but I would argue that cooking dinner is a task no person taking care of two kids all day should ever be expected to do. But he does it, because he is just that great. He also bakes pies and cookies on a weekly basis. I know it seems like I’m bragging right now, because I am. My husband is a manly Martha Stewart mixed with Mary Poppins, minus the magic — although to be honest, maybe he is magical. That would explain how he manages to also get all the laundry done.

Being the stay-at-home parent hasn’t always been easy for my husband. Not just because staying home with your two kids is probably the hardest thing that anyone of any gender could ever do, but because even though it's 2017, and stay-at-home dads are a lot more common than they used to be, being a man on the playground can still be a little bit isolating. Other moms didn’t warm up to him as much as they might have to me, although he did eventually form a close friendship with another stay-at-home dad. He also worries that he is not contributing to the family, but of course he is contributing in the most valuable way I could imagine: he's raising our kids right.

A strong, loving dad is a gift for both our son and our daughter, as is a hard-working, breadwinning mom. Our house is truly a place of gender equality where everyone pitches in and does what needs to be done. My kids still come to me for cuddles and comfort – I’m their mom, after all. But recently, when Mabel was sick and couldn’t settle down at bedtime, she asked for Daddy. I delivered her to him in the living room (where he was resting after putting our son to bed) where he rocked her gently to sleep. As I tip-toed her back to bed, she roused momentarily and blew her daddy a kiss before settling in for the night. It was probably the happiest I've ever been.

Sure, sometimes I wish he hadn’t taught them how to play hockey inside the house. But honestly, you can’t win ‘em all.