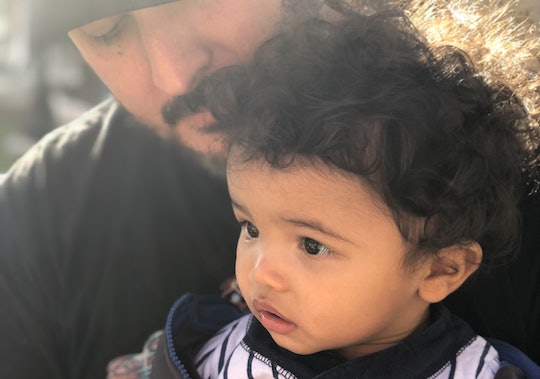 My Husband Refuses to Befriend The Local Dads & It's An Issue

When I need advice or support about parenting, I go to my husband. When he's not there or doesn't understand, the person I tend to go to next is one of my mom friends. When my husband needs someone to talk to, he has no one. It's not that my he doesn't have friends, or shall I say, acquaintances. He has the people that he works with, and of course his own father is just a phone call away. But he tends to keep things to himself, or feels as if he doesn't need advice. I actively work to build my network of moms, but my husband won't likewise make friends with local dads, and that's an issue.

Friendships are important throughout our lives, but they become very hard to maintain after having children. I honestly don't have a lot of time for my friends anymore. Some are moms themselves and they understand, but it's important for my mental health to be able to talk to someone outside of my house, especially when I'm feeling stressed. My husband, on the other hand, doesn't have that outlet, or even seek it. His life seems to revolve around work and us, his family. We have four children together and that can be stressful, along with paying the bills and dealing with a plethora of other things. We talk about mom friends as a vital part of parenthood, but "dad friends" doesn't have the same ring — and that's a problem.

Mental health is a huge but "silent" issue in the United States, with men suffering from mental issues, including anxiety and depression, in great numbers but receiving less attention than women, said Dr. Rob Whitley in Psychology Today. Paternal postpartum depression occurs in around half of the population of men whose partners experience postpartum depression, according to the Journal of Advanced Nursing. Things change tremendously after having a baby, whether it's your first or your fourth child, and the adjustment for dad is huge also. Both new parents need support after baby, but men are more likely to suffer in silence than reach out for help if they're feeling anxious or sad.

Before we started having children, my husband had never really been around kids. When we first started dating, he met my brother's children, my nieces and nephews, but he wasn't around for the times I babysat. Of course early into dating, we weren't really thinking about having children or I wasn't thinking about the kind of father he would someday be. The only real relationship he had with any of them was my niece, who was around more often, but again, he was never alone with her or had to take care of her.

I've told him he can talk to my friends' husbands, but he assumes he'd have nothing in common with them.

One of my husband's best friends, the best man at our wedding, is now a parent, but lives in Chicago, Illinois, hundred and hundreds of miles from California. My husband doesn't seek advice from, or even vent to, his friend. He says he's a "private person," which I understand, but I believe speaking to other parents about issues can make you a better parent. I sometimes get advice from a friend of mine who is a new mom, even though I have four kids of my own. She has different ways of doing things and I like to keep an open mind. It's nice to lean on each other, and to know you're not alone in your feelings.

I've tried to get my husband to befriend other dads. I've told him he can talk to my friends' husbands, but he assumes he'd have nothing in common with them. Honestly, even I don't have everything in common with my friends. My best friend is not even a mother, but at times I can tell her about things I'm going through with parenting four kids and still get a sympathetic ear. Sometimes I just need to vent, not even just get advice.

I tell my husband that he needs at least one dad friend to talk to but he refuses, saying if he needs to talk to someone, he can talk to me. That's good and I love that he confides in me, but I'm not always right — there are times when I doubt myself or feel like I'm a parenting fail. I need him to have someone else to call on for support.

I's important for my husband to understand that he's not the only dad who comes home from work after a long day and feels stressed just to be home. He has never said that to me, but I'm sure he feels it. When he gets home, sometimes the first thing he wants to do is relax and the girls will meet him at the door, asking him questions or needing something from him. My husband doesn't seem to mind — he complains very little — but I think it's important to consider his feelings, even if he's not always willing to share with words.

I won't stop telling my husband he needs another dad to talk to. It doesn't feel right that I have all of these magnificent women in my corner rooting for me when he's all alone in his.

More Like This
21 Back-To-School Instagram Captions For All The Feels
I'm Having A Slow Lazy Summer For the First Time In 20 Years & It’s All Thanks To My Son
Dr. Jill Biden Just Delivered Some Frank, But Powerful, Advice On Motherhood
Reddit Applauds Mom Of Five Who Stood Her Ground & Left Sleeping Dad Behind