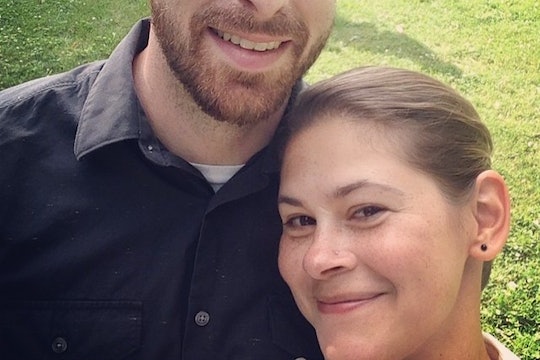 My Husband Said No To A Doula, & I'm Still Pissed

It’s been three years since I gave birth. I didn’t believe everyone when they said that after I gave birth, I’d forget the intensity of the pain, or the annoyance of having two people housed in my small body, but I really kind of have. I know it was a painful process, and I know I was uncomfortable most of the months, but I have sort of forgotten how wildly affecting those feelings were. What haven’t I gotten over? My anger at my partner quasi-unilaterally making a big decision about the birth: my husband didn't want a doula, and I'm still mad.

My husband and I talked about the option of hiring a doula after a prenatal yoga teacher of mine mentioned she also worked in that realm. She had such a gentle voice, and an informed mind, and she advocated for both me and my baby during my yoga class time, showing me how to alter positions and soothe my back. I started thinking: how great would it be to have her in the delivery room with me? There during that last and final moment in which my baby and I fight over who controls my body. That monumental time in which my baby is finally on his way out.

He kept talking about the price, and how much the baby was going to cost once he was here — and just kept hitting that point home, over and over again. So I gave in. I gave in!

I didn’t question whether my husband would be supportive during the labor. He’s supportive around the clock — whether it be in my work decisions, household chores, or when I’m deciding whether to cook a gourmet meal or cash my chips in and order pizza. I knew he would let me squeeze his hand when I needed and would stay seated by my side. But the informed part wouldn’t be there. He had no experience with childbirth. This doula? She had training. She had had a baby. She had hips like me and a uterus like me and an identity that had to have likely felt — at one moment or another, I hoped — a least a little like me. I wanted someone next to me that could remember what it felt like to be me, in that moment. I wanted a mother, a woman. I wanted her.

Now, when I say my husband decided quasi-unilaterally, I acknowledge I acquiesced. I gave in. He kept talking about the price, and how much the baby was going to cost once he was here — and just kept hitting that point home, over and over again. So I gave in. I gave in! Who was I to demand I feel more supported during one of the biggest life changes I would ever affront?

And there we have it. Ultimately, even though I felt so clearly in my heart that I wanted the help that a doula could give, I gave in to the argument that that help — for me, specifically — wasn’t necessary, because of the price tag. And we’re not talking about a twenty-thousand-dollar price tag. We’re talking around a thousand bucks. But I gave in, and made the decision — for us, for he and I — the team, embarking upon a financially exhaustive thing: a new baby.

But, now, in hindsight, I ask myself: was there even an us in that room during those three long days I was in labor? Was there an us or was there just a me — gritting my teeth, and feeling the intensity of my own vulnerability to my body? I know my husband was there, and I know the task of raising our child is and will always be one we do together. But my husband shouldn’t have been able to end the discussions on a doula. It should have been my decision.

My frustration over what for us is now the past still rises up, however, from time to time. Because I have friends who have had babies recently. Friends who wanted doulas. Sat down and talked with their husbands about the pros and cons. And you know what the list always looks like? The only thing on the con list is the price.

But the price of an advocate in the room with a woman who is in the middle of extricating another body from her body? That should be always be considered worth the price.

More Like This
Can The Way You Sleep Really Turn A Breech Baby?
These 4 Sleeping Positions Will Keep You Comfortable After A C-Section
Here's The Best Time To Remove Your C-Section Tape
These Stepmother's Day Instagram Captions Are Straight From The Heart