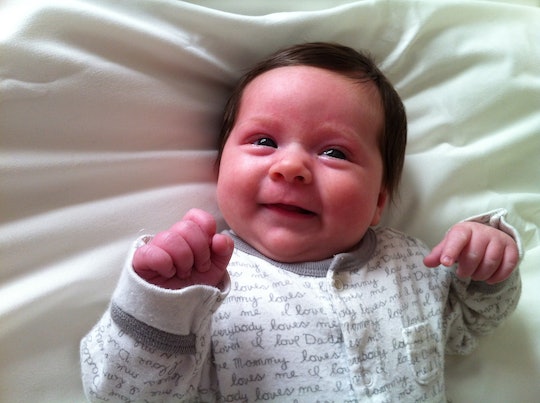 My Husband Was Too Involved With Breastfeeding

I have always considered myself lucky to have had a supportive partner throughout all of my pregnancies and the births of our three children. My husband has always done his best to be there for me as a mother, and I wouldn’t have been able to do it without him. However, while I might have needed him to help me shower during those early days, and constantly relied on him to bring me food, there was one area where I wish I had a little less of his help. I needed my husband to be less involved in breastfeeding.

More Like This
The Best Breastfeeding Positions For Newborns
When Will My Toddler Show an Interest in Their Baby Sibling?
The Best Dehumidifiers For Every Space In Your Home
How To Celebrate Pride As A Family

I was happy at first to have a husband who was so concerned and involved in ensuring my breastfeeding success. He would bring me a glass of water to make sure I was staying hydrated while feeding. He would ask me if I needed anything, putting pillows beneath me or trying to help me into a more comfortable position. But, a lot of the time, when breastfeeding wasn’t going as well as I hoped, all I really wanted was to be left alone.

My son wouldn’t latch, and constantly having someone hovering over me didn’t make matters any easier. It wasn’t necessarily that he was doing anything wrong, but I didn’t want anyone around to witness my failure. I didn’t need advice or support from him when he couldn’t understand what I was going through.

I hated that I had to pump and use bottles. I hated that on my third child, everything I had learned from raising my previous children didn’t help me one bit. I hated the feeling that I couldn’t master what was supposed to be the most natural thing in the world. And I really hated that my husband didn’t seem to get what any of that felt like, even though he was constantly around. All his good intentions couldn’t change the fact that I was struggling to make breastfeeding work, and there was nothing he could do to help.

Every time the baby became even a little bit fussy, my husband would thrust him on me, saying he was hungry and maybe now would be the time he would want to latch.

At a certain point, I realized that I needed a lactation specialist, not someone to bring me a drink or a pillow. So I sought out help, since it was clear that my son wasn’t going to latch on his own. What ensued was an hour of utter misery. He was a mere week old, but already our breastfeeding journey was wrought with trouble. I was engorged and uncomfortable, and his mouth was so small he couldn’t seem to get a good latch. The lactation specialist was helping me hand express, pouring one of his bottles over me to show him there was milk. Although he latched in the end, I couldn’t imagine repeating this scenario over and over again every time he needed to eat.

When I returned home, I told my husband about my experience, more as a way to unpack my emotions than anything. But upon mentioning the fact that my lactation consultant had encouraged me to try with even more frequent feedings, I soon found my husband “helping” in this regard as well. Every time the baby became even a little bit fussy, he would thrust him on me, saying he was hungry and maybe now would be the time he would want to latch. Not only did it put a ton of pressure on me, but it was also just a pain in the ass. He didn’t always need to be fed. He wasn’t always hungry. And throwing him at my boob didn’t change that. It just made my life harder. It made breastfeeding harder too.

Though we slowly but surely got him to latch, I often found it more difficult when my husband was involved. I was always tense when he was around, partly because I didn’t want any spectators if it didn’t go well, but also because so often he was forcing the baby on me when I wasn’t ready to attempt breastfeeding. It came to a head one day as the baby barely started to fuss and he brought him to me immediately.

Finally, breastfeeding became something I was able to enjoy, because I no longer felt pressured to perform.

It was the same thing he always thought. When I explained to him that I didn’t want him to hand me the baby every time he made a noise because it stressed me out, he said he didn’t realize he had been doing that. All he had ever wanted to do was help facilitate my breastfeeding relationship with my son, especially when it had started off so rocky. And to be honest, I knew that. I knew he was doing his best, and I was the one who wasn’t making my needs known.

So I finally told him I needed him to back off on the breastfeeding front, and trust that I’d know when our baby needed to eat. While he would still hand him off to me every now and again when he couldn’t get the baby to settle, by that point it usually was because the baby was hungry. The rest of the time, he left me to it, and finally, breastfeeding became something I was able to enjoy as I had with our other two children, because I no longer felt pressured to perform. And truthfully, that was all I needed. A little alone time to regain my confidence, and to breastfeed by myself.