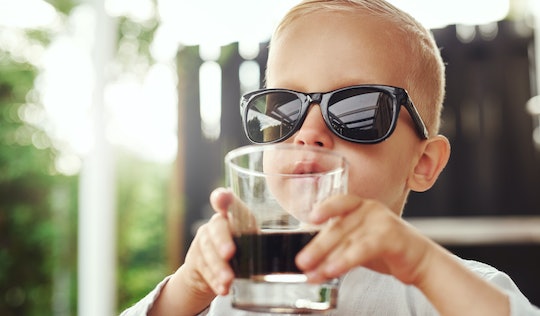 It was SuperBowl Sunday. Between scrambling to get out the door and a debilitating case of pregnancy brain, I arrived only to realize that I had forgotten my daughter's Elmo cup. We hadn't been there five minutes when she asked me for agua. Our hosts didn't have anything with a straw, but we found something with a small spout... and my kid was fit to be tied. She couldn't (or, more accurately, wouldn't) manage it, and we left at half-time. It was so embarrassing for me because she's almost 3, and my kid can't use a "big kid" cup.

The worst part of all is that I did everything right in the steps leading up to the transition to a real cup. I combo-fed my daughter (breast milk and formula) from the beginning. My milk dried up around seven months, and I weaned her from the bottle at one year, about the same time we made the switch to whole milk. I only used traditional sippy cups for a few months. I knew that overuse could lead to tooth decay and speech problems. I introduced the straw early on because I'd read that little ones need to develop the muscles associated with drinking from a straw in order to manipulate food and make certain speech sounds. I also switched her over to cups without handles. In other words, I did everything the way I was "supposed to."

I thought I set myself and my child up for success with the "big kid" cup. And then I just... stopped. The straw cups were just so damned convenient. They were easy to throw in my diaper bag (you know, when I could remember to bring them), she could manage to click them open by herself, and I had a no-spill guarantee. Most restaurants also provide kid cups and, although they're not spill-proof, they do have a straw. My child has ruined more than one of her cups by chewing her way through the straw, but instead of taking that as a hint, I just bought her more.

Ever since the SuperBowl incident, I've stepped up my efforts to get my daughter on a regular cup. I've missed the ideal 16- to 17-month age window suggested by BabyCenter by quite a lot, so I know this is going to require some patience and hard work. Fortunately, shame (on my part) is a pretty great motivator. I've done my research on getting a kid onto an open cup and, as a result, I've developed what I believe to be a fool-proof plan towards "big kid" cup usages. Well, at least I hope so.

There's a world full of beverages out there to try, and I know it's my responsibility to make sure my kid has the skills to be able to access all of them.

Start with a trainer cup. This little guy is like a transitional cup. It has a lip instead of a spout, but your kid has to really suck on it to get the liquid out. I just bought one of these. Honestly, I think my daughter has an easier time sipping out of it than I do (I tried it myself, naturally). I showed her how it's done, and she picked it up pretty easily. The only problem is that it really controls the flow, so she's not learning that skill.

Model, model, model. Have you ever noticed that your toddler wants to do whatever you are doing? I mean, my 2.5-year-old is already working on a chapstick addiction à la her mother. We parents can take advantage of their copycat tendencies. I have two open cups that are exactly the same. We sit down at the table together, and I show her how I take a sip (just like I showed her how to use a straw) and then say, "Look how mommy does it. Your turn!"

With my particular child, cold turkey is not the way to go when implementing anything new.

Use a motivating liquid. I have been anti-juice from the get-go. The American Academy of Pediatrics recommends no fruit juice before age 1 and limited intake after that. I know it has no nutritional value, but in small amounts it's quite motivating. My daughter is much more willing to sit and try to drink out of a "big kid" cup if her cup has a few ounces of orange juice in it. Another great idea? Pediatric Feeding recommends a thickened liquid because it moves more slowly, giving the child more time to respond. Jamba Juice, here we come. Give us all your delicious, fruity viscosity.

Get a special-ass cup. Toddlers love choices. It's a great idea to let them select their own cup at the store. I find that my daughter handles it better if I offer her two options rather than the whole shelf, though. She feels empowered if she can pick either the blue or the yellow cup. What to Expect suggests conscripting your child's favorite characters for help in the effort. For me, that probably means I need to come to terms with having a Trolls cup in my home. The sacrifices I make, I tell you.

I guess it could be worse. At least I don't have to get my daughter off the bottle at the same time I'm getting her on the open cup.

Insist on cups at mealtime. With my particular child, cold turkey is not the way to go when implementing anything new. I've just started using open cups at snack time, and I think I'll start requiring them at dinnertime, too. If I add one meal at a time, perhaps it won't be so overwhelming to a change-averse toddler. And, honestly, it works better for me, too. I still want her to drink from a straw cup in the car. I'm a lot more comfortable with spills at home than on the way to school or a play date.

Try a behavioral approach. Honestly, this feels a little Pavlovian to me (kind of like giving your kid M&Ms to get them to poop in the potty, although honestly, I think I'm at that point, too). The gist of the behavioral approach is that you offer the child a verbal cue to drink and then hold the cup to their mouth. If they take a sip, they get a reward (praise and play). Over time, you increase the volume they're expected to take in. I haven't tried this yet, but I'm considering it as a last resort.

I guess it could be worse. At least I don't have to get my daughter off the bottle at the same time I'm getting her on the open cup. But there's no denying the straw has become a crutch. She's a one-trick pony, and that's not cutting it anymore. There's a world full of beverages out there to try, and I know it's my responsibility to make sure my kid has the skills to be able to access all of them. Even if it means her cup sometimes runneth over.