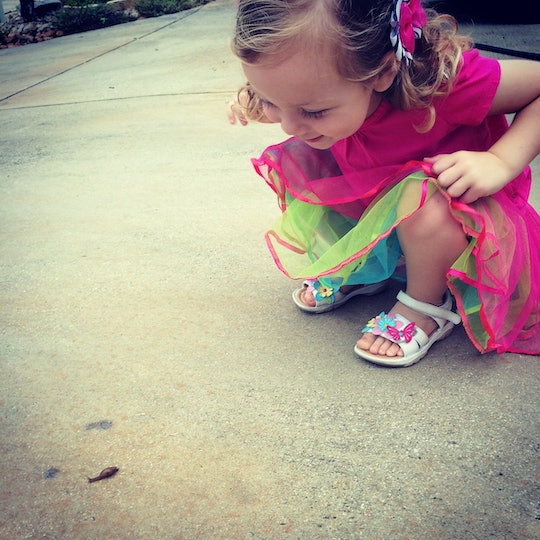 My Kid Was Diagnosed With Sensory Processing Disorder, & Honestly, It Was A Huge Relief

From the moment she came into the world, our baby was different. Unlike most newborns, who fall asleep shortly after delivery, my child stayed awake, then gazed wide-eyed around the room for four hours. I was utterly exhausted from being in labor for 22 hours and pushing for three, but she clearly wasn’t. She stayed awake, and then she continued to do so for basically the next 5 years.

For the most part, the first night at the hospital was OK, but my daughter just wouldn’t sleep in that little sidecar bassinet. Other babies on our floor seemed to have no problem with the little bed, but my daughter did. Every time I nursed her to sleep and carefully laid her down, she would only last for a few seconds before she was awake and protesting with her tiny little kitten cry. I figured just one night by my side wouldn't hurt, so we curled up in my hospital bed and she finally fell asleep.

The idea of "just one night" lasted until she was about 3 years old. I hadn’t intended to co-sleep, but as long as she was by my side touching me, she could sleep all night. As a new mom, I had a choice: I could keep my own bed or keep my own sanity. I chose sanity.

As my daughter grew up, people frequently commented on how "alert" she was for such a tiny baby. We later discovered that she wasn't just alert. She was overwhelmed. Our little girl was living in a constant state of heightened sensory overload, because she had sensory processing disorder (SPD).

When my daughter entered her terrible twos, which actually lasted from about 18 months until she was 4, our lives were a constant balance of prevention and preparation. We always had to stay one step ahead, constantly trying to predict her mood swings and prevent her from freaking out. Most of the time, she was a perfectly wonderful child: silly, generous, funny, and a friend to all. But the second things went slightly off-script, she would completely lose her mind.

I remember one night when my mother-in-law came to visit, my daughter had asked her grandmother to put her to bed by reading her a story. My daughter chose 5 books, but it was getting late, and her grandma told her she’d just read two tonight. My daughter completely flipped out.

She was an inconsolable puddle of emotions. Sometimes, after she calmed down, she would curl up in my lap and ask me "Why am I like this, Mommy?"

It wasn’t a tantrum. A tantrum is a kid kicking and screaming because he wants a toy at a toy store, or Veruca Salt wanting an Everlasting Gobstopper. It was a full-scale meltdown. She was an inconsolable puddle of emotions. Sometimes after she calmed down, she would curl up in my lap and ask me, "Why am I like this, Mommy?"

My daughter's meltdowns continued throughout the toddler years, and they made me constantly question my parenting. Maybe I wasn't strict enough with her, I reasoned. Maybe I was too permissive as a mom. But after we had her younger sister, I realized we weren’t having the same battles with her as we were with my oldest daughter. She'd throw little tantrums, sure, but they were worlds different than my oldest daughter's meltdowns.

Towards the end of preschool, I noticed some real differences between my daughter and the other kids. She got in trouble at play dates for crashing into kids and hugging them too tight. She would panic in public restrooms with automatic flushing toilets or loud hand dryers. And she couldn’t eat any food that wasn’t a part of what doctors later told me was “the bland and tan diet.”

Once, at a co-worker’s house, we told my daughter she could have dessert if she just tasted the broccoli. She went on and on about how she was going to love broccoli and was happy to try it. But she took one bite and turned pale. She tried to choke it down, but she gagged on it and projectile vomited all over the floor.

She kept doing these impulsive things, but she didn't know why she was doing them.

As kindergarten approached, we took her to buy new tennis shoes for school. But as much as she liked the shoes on display, none of them seemed to fit. She was particularly excited about some blue and pink Twinkle Toes shoes she saw. She begged us to get them, but when she tried to put them on, she started shaking and nearly kicked the shoe across the store. She cried on the way home, and I could see the hurt in her eyes: she hated that she couldn’t get the shoes, but something about the way they felt on her feet was intolerable to her.

When my daughter started kindergarten, on her second day they had to call the counselor to retrieve her from under a desk. She’d had a panic attack during class because her teacher had asked her to cut a circle out of paper. She couldn’t get her hands to cooperate to cut the paper, so she cut her name tag on her desk. She kept doing these impulsive things, but she didn't know why she was doing them.

A few days later, I spotted an article about sensory processing disorder (SPD) on the internet. According to WebMD, SPD is a condition in which the brain has trouble receiving and responding to information that comes in through the senses.

I glanced at the website's checklist of symptoms: feeding problems, over-sensitivity to noise, difficulty performing fine motor tasks like those with scissors or buttons, difficulty making friends because of rough play, etc. My daughter had way too many of the symptoms for me to ignore.

I spoke with her pediatrician, who recommended that we try an occupational therapist. It didn’t take long for our initial evaluation to confirm what I already knew: my daughter was diagnosed with sensory processing disorder and referred to a psychologist.

I loved her with my whole heart and I knew I had done the best I could as her mom, so to hear that she just felt the world differently than the rest of us did was a huge weight off my shoulders.

Upon hearing my daughter's diagnosis, I honestly felt relieved. It helped explain all of the little quirks that I kept blaming myself for, like the picky eating and the emotional meltdowns. I loved her with my whole heart and I knew I had done the best I could as her mom, so to hear that she just felt the world differently than the rest of us did was a huge weight off my shoulders.

The therapist explained to me that there are sensory seekers, who need more sensory input, and sensory avoiders, who need less. There are also plenty of people who are both, and my daughter was one of them. She explained to me that because of the way my daughter's brain processes noise, the sound of hand dryers in the bathroom were like someone sneaking up behind her with a bullhorn, which is why loud noises were so disturbing to her.

The shoes were also a sensory issue for my daughter. Putting on a tennis shoe for her was like putting on a shoe that was three sizes too small, filled with thumbtacks and wrapped in a boa constrictor for an indefinite period of time. The therapist showed me some brushing techniques to try to calm her down, and in no time my daughter was able to get those sparkly blue and pink Twinkle Toes.

According to my daughter's psychologist, the SPD could be totally treatable with therapy. They recommended we visit a sensory gym so she could practice self-regulation, which gave her a safe space to bounce and spin and crash, and she got all the sensory input she craved from the rope swings and monkey bars. It was a dream playground for kids, and it was designed to help our girl get through her day a little bit easier. After just a few sessions, I started to notice a difference in her behavior.

The occupational therapist had a solution for everything. I told my daughter she had super powers like super hearing and super touch, so she got to go to Super Hero Training Camp to learn to harness her powers. It gave her a positive spin on being different, and it was empowering.

My daughter went to therapy every other week for a year throughout kindergarten, and by first grade she only needed to go once a month. I wanted to put a positive spin on her treatment, so I told her she had super powers like super hearing and super touch, so she got to go to Super Hero Training Camp to learn to harness them.

My daughter is now in the second grade. While we are still aware of her SPD needs, for the most part she can now regulate those sensory overloads on her own. She's done with occupational therapy for now, and although she begs us to go back to the gym, for now we are just keeping it in our toolbox if the need arises.

Our SPD diagnosis wasn’t the bad news that something was "wrong." It was just the information I needed to let go of my parental guilt and to get my daughter the resources she needed to feel fabulous. She still looks at the world in wide-eyed wonder, just like the day she was born. Now we just know how to help her take it all in.