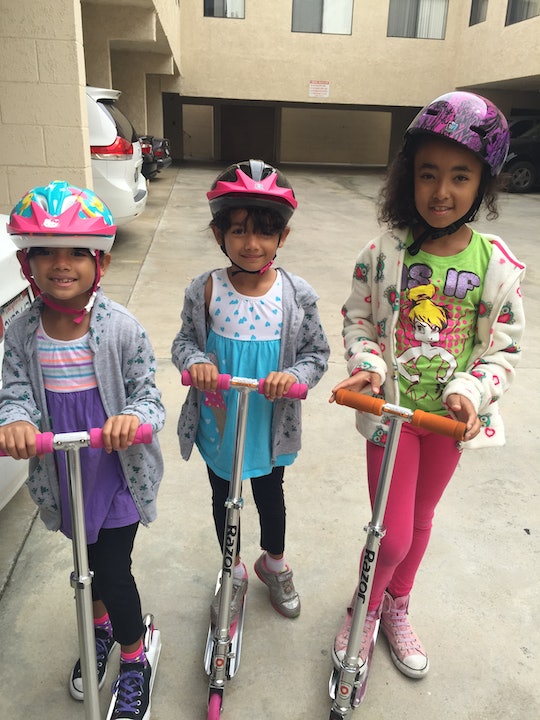 My Kids Are Much Better Off Than I Was Growing Up

I grew up on the south side of Chicago, in a neighborhood with a high crime rate. We'd frequently hear gunshots, and I wasn't allowed to play outside. I grew up extremely poor, and I was raised by a single mother who had a disability, so she couldn't work a lot of the time. My father was in and out of my life. When I needed school supplies, my aunts would buy them for me. When we didn't have enough food, my grandmother would bring over a bag of groceries. For a while, we didn't have a telephone, so we had to go to a public phone two blocks from our apartment, just to let our family know we were OK.

By contrast, my children are spending their childhoods in sunny California, in a suburb of Los Angeles where the crime rate is low. Unlike me, they won't spend their childhoods worrying about where the next meal is coming from, or if our electricity will be turned off. At times, I find it hard to relate to my children. My kids are much better off than I was growing up and I must admit, sometimes that's difficult for me.

My daughters are constantly told that they are loved, and that they are smart and beautiful people. When they have a problem, I drop what I am doing to address it. If they are sad, they are hugged, even if they did something that got them into trouble. And I don't spank my children, even though I was spanked as a child.

My children are also lucky to have a father who comes home every day after work. Even when he's tired, he does things for them and for me. If he sees I'm stressed out or tired, he'll come in and take over. He'll bathe the baby, load the dishwasher, and sometimes even cook dinner. I know how lucky we are to have him, and I feel bad that my mother didn't have a supportive partner when I was growing up.

Instead of dwelling on the fact that my childhood was a struggle, I'd rather concentrate on being the best mom I can be and giving my children the lives that they deserve.

My husband also grew up poor, and we do our best to provide for our four children. They have a lot of toys, and I admit that sometimes we buy them gifts for no reason. I think we spoil them because we're trying to compensate for the fact that our parents couldn't spoil us.

So when my kids don't finish the food on the plates, or complain that they're bored, I have a hard time sympathizing with them. Honestly, I find their complaints quite irritating. I tell them about my childhood, and how at times we didn't have enough food. I tell them that instead of complaining about how they don't like the food on their plates, they should be grateful they have food to begin with. I'm not sure they understand.

Because my children are so much more privileged than I was growing up, I feel a certain amount of guilt, mixed with jealousy. Not that I'm jealous of my children, per se — I just wish my childhood had been as good as theirs. Maybe then, I wouldn't have struggled with anxiety and depression as an adult.

It is my problem, not theirs, and I'm aware of that. I know I can't guilt-trip my kids every time they do something or say something entitled, just because of the way I was raised. My childhood might not have been great, but because of it, I've been able to reflect on what kind of mother I want to be and how I want to be an example to my children. I honestly never thought I would be lucky enough to have this life with these children, as well as a husband who's thoughtful and responsible.

But of course, I try not to think about that too often, because as parents, our goal is always to try to give our children better lives. So instead of dwelling on the fact that my childhood was a struggle, I'll concentrate on being the best mom I can be and giving my children the lives that they deserve.