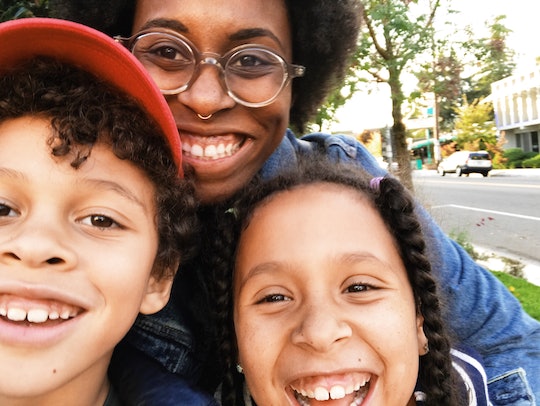 My Kids Make Me Feel Proud To Be Polyamorous

Over the last four years, my family dynamic has changed because of divorce and polyamory. I'd always wanted a large family, but I believed was only attainable by having lots of kids, and polyamory was never something I thought of because I grew up in a religious and conservative environment that placed monogamy on a pedestal. Anything else was a sin; adultery. So when I began to explore non-monogamy, I was most surprised that the two easiest people to explain polyamory to were my children because my kids make me feel proud to be polyamorous. As my ex-husband and I eased into non-monogamy before separating, I remember my 4-year-old daughter asking me when I'd have a boyfriend outside her dad. I laughed and asked her why she asked me that, and she said, "I just want more adults to love me!" That comment has stayed with me and has served as the foundation for how I talk to my kids about polyamory.

The first time I talked with my children about polyamory was when my ex and I told them we'd be separating. I remember feeling slightly nervous about it, wondering if it would confuse their then-4-year-old, and then-5-year-old brains, but I'd promised myself that if I was going to practice non-monogamy, I was going to include my whole family. After all, this decision wouldn't just affect me; it'd affect all of us. So I told my both of my kids the truth: even though I was still married to their dad, I'd been dating other people, particularly my current partner, someone they'd already spent a lot of time with. When we told our kids we were separating and the reasons why, both my kids just said, "Oh, wow! We love him, that's so cool!" I remember breathing a little bit easier as we went to bed; there were no secrets between any of us anymore. It's always been important to me to have my kids be a part of this lifestyle change, and I was amazed by their reactions.

Our conversations about polyamory are different than they were when they were younger. My kids don't see a difference between polyamory and monogamy — they just see people practicing love in different ways.

After that initial conversation together, my daughter had a few more questions about loving multiple people. She wondered why more adults don't have multiple partners, which opened up a discussion about how our differences give us strengths and also set us apart. I told her that even though I felt like I was capable of loving and caring for more than one person, her dad was opposite of me, and both of those things were acceptable and valid. When we had a mother/daughter overnight trip to a hotel in town, she laid in bed next to me and said that loving a lot of people made sense in her head, and she likened it to having lots of best friends. It was amazing to hear my 5 year old express such a grown-up view on relationships and love.

Now that my kids are 7 and 8 years old, our conversations about polyamory are different than they were when they were younger. My kids don't see a difference between polyamory and monogamy — they just see people practicing love in different ways. When my son talks about his future relationships, he talks about marrying one person, while my daughter mentions having five different weddings. Their home life has shown them that love doesn't only exist and thrive in one kind of relationship, and that's incredibly important to me.

On days when the kids are at our house and not their dad's, they come home from school asking for my fiancé, and then they ask to call my other partner to say hi and give them updates on their days. If we talk about taking trips or having dinner together, both kids ask if everyone will be there — and by everyone, they mean their dad, his partner, me, and my two partners.

This past summer, I started to date another person seriously, and even though I've been open for about three years, it was the first time I'd wanted my kids to meet someone I was with (outside of my fiancé). I felt myself getting nervous in the same way I did when I first introduced the conversation about non-monogamy to them, but as I watched my kids introduce themselves to my new partner, I saw that they were excited and eager to get to know them.

I've been partnered with two people for about five-and-half months now, and I think I've struggled with the adjustment much more than my children. On days when the kids are at our house and not their dad's, they come home from school asking for my fiancé, and then they ask to call my other partner to say hi and give them updates on their days. If we talk about taking trips or having dinner together, both kids ask if everyone will be there — and by everyone, they mean their dad, his partner, me, and my two partners. My kids never question what their family looks like or why it looks that way. Instead, I've been overjoyed to watch them feel completely wrapped, covered, and smothered with love by multiple parents.

Growing up in a religious household, I was taught that a family must consist of two parents: a man and a woman. Divorce wasn't part of the makeup of a family, and if divorce happened, or a child came from a single-parent home, this child would suffer and not thrive. I was taught and shown that the only way to have a true loving relationship was to share it with one person. In talking to my kids about polyamory, and watching them grasp, without question, the importance of having relationships according to your own needs, I've learned and been validated in my decision to love multiple people.