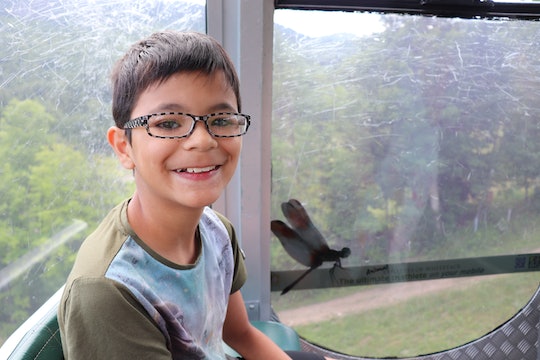 My Kid's Sensory Issues With Food Make Meals Complicated, & I Need To Step It Up

My 10-year-old son is one of the most amazing kids you'll ever meet. He's sweet and kind, he's so smart and witty, and he loves Fortnite and Last Week Tonight with John Oliver. But he also has some fierce struggles — he's autistic and a savant, so his world is more complicated than ours. One of the ways his autism presents itself is with sensory issues. He hates socks with seams, wearing clothes, and bland food. He's a sensory seeker, so he needs his food to bite back. Yes, my kid's sensory issues with food make meals complicated, and I've come to the conclusion that I need to step up my game.

I had the pleasure of speaking to registered dietitian Chrissy Carroll of Dairy Free for Baby, and I found myself examining my kids' lunch habits — let me tell you, it wasn't pretty. The same morning I spoke to her, I'd filled my kids' lunch boxes with foods from the Chinese bakery that were more quick and easy than they were packed full of nutrition and worthy of lunch. Not that healthy meals that will suit my sensory seeking son have to be a huge effort, but buying all of it, down to the cubed watermelon and chrysanthemum tea, wasn't the best option. It wasn't low effort — it was zero effort.

But packing food for him isn't always easy. His autism and sensory processing disorder present in some very typical ways, and in other ways, it's radically different from what most people expect. For a long time, he struggled with texture — if he didn't like the texture or the combination of taste and texture, he would immediately make himself throw it up. It became a real challenge to feed him. We eventually discovered that he likes food that has a lot of flavor, specifically spicy foods. He has fewer problems with texture than he did a few years ago, but he's still never going to eat the crust of bread, he'll never eat butter or cheese that isn't melted, and still prefers sushi over just about every other food — spicy salmon rolls with extra wasabi, please.

He's not alone. According to the Journal of Developmental and Physical Disabilities, kids with Autism Spectrum Disorder (ASD) and other children with differing levels of sensory issues often have a hard time when it comes to eating differently textured foods and flavors. However, the triggers vary widely from child to child. Their researchers recommend working with doctors and feeding therapists to determine the best ways to feed your child. For mine, that means keeping that hot sauce in my bag, and I'm fine with it.

Catering to his needs does get tiring. And my daughter, a textbook picky eater at 7 years old, isn't much easier. Lately, and instead of trying to come up with more creative ways to expose them to different foods, I've allowed them to become dependent upon the few foods they really like. For my son, that means throwing spicy sausage rolls at him like there's no tomorrow, and for my daughter, the amount of toast with butter and salt she's eaten over the summer is pretty absurd. I've also cut up about eleven million mangoes because my son can pour on the Tajín Clásico Seasoning, and my daughter will eat hers plain. I tell myself I'm getting nutrients in them, but they're the same nutrients on repeat. They're definitely missing some key vitamins at this point. (Thank goodness for chewable vitamins.)

Here's the irony, I love to cook. It's one of my favorite things to do. Somewhere along the way, I began to lose my mojo when it came to feeding my kids. Their near-constant rejection of every single lovingly prepared meal wore me out. Nobody likes to see their work constantly jilted for something easier, something with less thought, something absolutely resembling chicken nuggets dipped in Frank's Red Hot for my son or macaroni and cheese for my daughter, but kids can and will do that. They will turn their nose at your shrimp alfredo, and then ask for buttered noodles instead. They will reject your steak au poivre and ask for a Five Guys burger with double jalapeño. My daughter will look at me with a straight face after watching me cook for an hour and a half and ask if she can "just have a mango for dinner."

But I have a plan, and starting today, I'm going to try to get more creative, and I'm going to document it. We'll see how this goes. Today's lunch was "magic chicken" (so named because both kids eat it) and a mixture of side dishes tailored to each kid.

My son's chicken is doused liberally with Cholula, and his side dishes are banana peppers, pickles, and plain sweet potatoes. My daughter's sides are raw carrots and plain sweet potatoes. After serving this to my kids, my son poured chipotle tabasco over his potatoes, and my daughter drizzled butter and aleppo pepper honey on top of hers. She also got a giant scoop of peanut butter for her carrots — all while my back was turned. While they both ate the majority of what was offered, my son started with the banana peppers and pickles, so I'm not sure how much of everything else he tasted given the overwhelming heat and vinegar of the side dish. My daughter still asked for an oatmeal cream pie and a frozen icelandic yogurt tube.

I'm calling it a win, even if they modified it all to heck. This new endeavor is going to take a lot of creativity, and even more research, because satisfying one kid with a sweet tooth and fairly bland palate, and one child who thinks that hot sauce should come in beverage form, isn't going to be easy — but it's worth it. They are worth it, even if my ego gets a bit battered in the process.

More Like This
16 After-School Snacks For Hangry Kids
McDonald's Is Going To Sell Happy Meals Just For Adults So We Never Have To Grow Up
Can Elderberry Help Prevent Illness In Kids? Doctors Weigh In
What Is RSV?