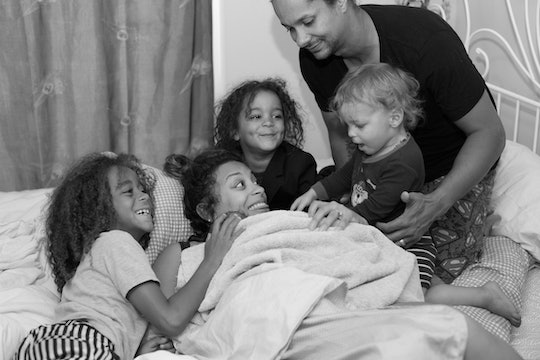 I Had Home Births, Because I Wanted My Kids To Be A Part Of Things

When people first hear that I had home births for my youngest three kids, they immediately assume that I’m some kind of freewheeling hippy who shuns doctors and vaccines. And that I subscribe to some sort of conspiratorial idea that all hospitals are evil. Look, my children had McDonald’s three times last week — my body isn't a temple, I just live here. But I researched it, knew I was low risk, and chose to have a home birth involving my kids.

My oldest son, Phoenix was born in a Catholic hospital in 2008. I went in with my birth plan, bouncy ball, and wide-eyed naïveté for what I wanted my birth to look like. What I got instead was 21 hours of hard labor that was stalled and stopped, a revolving door as we rotated family members in and out, and only fuzzy memories of what active labor looked like because we weren’t allowed to photograph or film anything. I left with a beautiful baby in my arms, sore lady bits and just a little bit of resentment for not getting the birth I imagined.

When my son was just a few months old I stumbled on to Rikki Lake’s Business of Being Born and became an enthusiastic convert of all things birth. I had no immediate plans to expand our family but I knew that when I did this would be the birth we wanted, provided it was a safe option for me. I attended a midwife practice, and they determined that it was.

The U.K.'s National Health Service has found that women with uncomplicated pregnancies are "better off in the care of midwives than hospital doctors" during birth, as the New York Times has reported. In the U.S., around 1.36 percent of births occur at home, per the CDC.

Four years later I fell pregnant — I love that term “fell pregnant” as if it’s something you just stumble into by accident. But I digress. When I got pregnant with our second son, Caspian, I told my husband that I wanted to have a home birth. He thought I was crazy and didn’t understand why any sane person would have a baby using a DIY kit you purchase on the internet.

I wanted to welcome our babies into the world, into our home and into our family with every one of their siblings, cousins, grandparents, aunts, and even uncles who wanted to be there, present in the room.

So what was the driving force behind having my babies at home? For starters, it was the fact that I could eat during labor. Even if I didn’t get a chance to eat just the simple fact that I knew if I craved a cheeseburger in between contractions I could have it.

When I had Phoenix, I went in for a routine checkup on Thursday on an empty stomach with plans to eat after. But that never happened and I didn’t deliver until Friday morning. Do you know what a hungry pregnant lady is like in labor?

But the biggest reason I wanted to be able to have my children at home was that I knew I wanted to welcome our babies into the world, into our home, and into our family with every one of their siblings, cousins, grandparents, aunts — and even uncles who wanted to be there — present in the room.

When we prepped for our first home birth, Phoenix, who was four at the time, prepped right along with us. We watched videos and talked about what was going to happen to me and the baby. And when that day came Phoenix stood (after he tried inviting the neighbors in) excitedly at the pool with me and said “Mommy! I’m ready to meet my little brother.”

Just 18 months after that we found ourselves filling up that same birthing pool again.

And just 20 months after that, as my husband started filling the birthing pool, Caspian and Phoenix sat on the bed rubbing my back and feeding me oranges in the midst of contractions. That’s when it finally hit me that this was why I wanted to have a home birth. Having a home birth for me wasn’t a hippy ideal I wanted to fulfill. It wasn’t about having bragging rights or even feeling like an empowered mom Goddess (obviously I totally felt like one though). But it was about a full-circle family moment.

And would you believe me if I told you that just 18 months after that we found ourselves filling up that same birthing pool again? Clearly, we don’t understand how birth control works.

For our last (note: “last” is in italics) baby, there wasn’t just us waiting to meet her. Yes, there here her brothers patiently waiting and watching in their fancy jackets and bow ties. But there were also aunts, cousins, sister-in-laws, a grandma who doubled as the doula, a film crew (another story for another time) and all the McDonald’s breakfast a laboring mother could want.

It’s always been important to us to make sure that our children viewed birth with the correct optics: as an important, serious, but wonderful, life-giving, and loving time. It was completely normal when my seven-year-old asked to see the placenta. And our four-year-old wasn’t fazed by the moaning, yelling, and pleading. The 18-month-old moved in and out of the room at his leisure and that was just fine with us.

Our children were brought into the world around the people that we want always to remain most important to them and that’s why we chose home birth.

More Like This
Mom Gives Birth To Record-Breaking 16-Pound Baby
30 Messages To Write In A Valentine's Day Card For Your Child
13 Is "Too Early" For Kids To Be On Social Media, Surgeon General Cautions
The Best Travel Tips For Solo Parenting
What Parents Are Talking About — Delivered Straight To Your Inbox