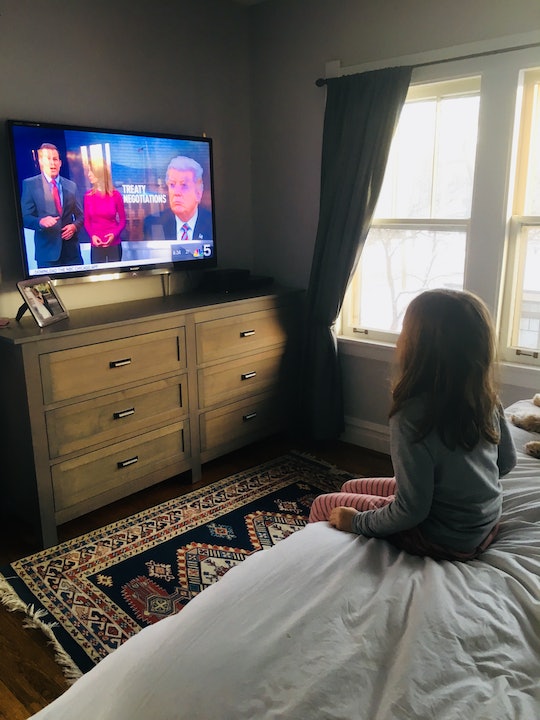 My Kindergartner Watches The News, & I Don't Think That's A Bad Thing

Last year, when my daughter was in kindergarten, her teacher contacted me about her behavior.

Aria, who was 6, had drawn a picture of a man holding a gun, with blood on the ground. In her nearly illegible writing, she had scrawled, “Guns bad.”

Her teacher presented me the picture, and we both peered at it silently. I was wondering why I had to take time out of my day to see my daughter’s artwork.

“How did Aria know about this?” her teacher asked. It was the day after the Orlando nightclub shooting.

“She probably saw it on the news,” I said casually.

Her teacher looked at me in horror. Apparently, kindergarteners shouldn’t be watching the news.

This was news to me.

My daughter watches the news every morning while she eats her breakfast. We keep the news on in the background while we eat dinner. And if something big is happening, it’s on all day. We also talk about the news. Constantly. Her older sister, who is 10, tends to play with her dolls, and rarely asks about current events, preferring to stay in her own dreamworld (she’s always been my dreamy child).

But my little one? She is obsessed with the news cycle. Aria doesn’t know how to add 5 plus 6, but she knows all the intricacies of impeachment. She can weigh in on the gun control debates like a CNN commentator, and she understands why some NFL players kneel during the national anthem.

Now, her kindergarten teacher was telling me that this was a bad thing. She was too young.

Her teacher was technically correct. A study published in the Journal of Pediatrics found that children ages 8-12 who watched real events on TV had higher fright responses and were more emotional than those who were told they were watching fiction on the screen.

I get it. The news has become super scary.

Aria’s teacher asked me to turn off the news, to stop our discussions.

So I tried. We ate in silence. I turned on some music. Aria was frantic.

“What did Trump do today?” she asked.

“How are the elections going?”

I tried to explain that she was too young to learn about this. Plus, I said, doesn’t the news scare you? All those shootings?

After all, she had stared at the screen in horror, silently comprehending the shootings in Orlando, in Paris, in Canada. Her biggest concern always was the “bad guy.” Why did he do it and was he in jail now?

I didn’t ever want to overwhelm her, but these shootings did happen, and they were happening on a semi-regular basis. We talked about how badly we felt for the victims, who hadn’t done anything wrong. We discussed what happened to the bad guy, whether he died himself or if he was arrested. Often, we tried to help in some way by sending a card to a victim, or money to the cause or volunteering at our local homeless shelter.

The policemen come to talk to her class every quarter about bad guys luring small children with puppies.

Aria also did her part to appease me. She explained that she was prepared for anything.

She had lockdown drills at school practically every month just in case of bad guys. And a fire drill, a tornado drill, and earthquake drill and more. The policemen come to talk to her class every quarter about bad guys luring small children with puppies, about why some women look friendly but can’t be trusted even if you’re lost, and about why you should never talk to strangers because anyone can be evil.

This all sounds so horrific, and it is. But pretending that this isn’t happening isn’t going to stop it. Perhaps, though, educating my daughter about what’s going on beyond her sheltered school and comfy home will help me raise a street-smart, curious, questioning woman. Aria digests the news, she discusses it, she questions it and she demands more.

And maybe that’s what will change the news cycle.