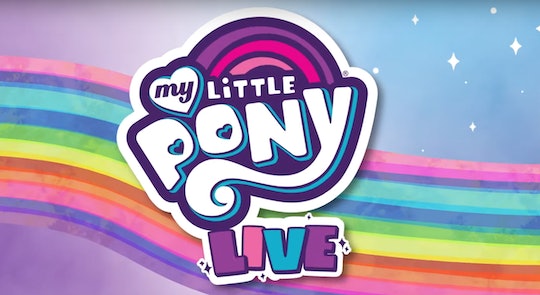 Sparkle, Applejack & The Rest Of My Little Pony Gang Are Heading To A Town Near You

Countless millennials grew up loving My Little Pony — the TV series, the cute merchandise, the movie... All of that 80s goodness has come and gone, of course, but the beloved characters are returning again for a whole new generation of viewers to enjoy. Now, Hasbro is launching yet another new way to enjoy your favorite characters with My Little Pony Live. News of the live show was initially announced in June, and months later, My Little Pony Live musical tour dates have finally been revealed, so get ready to sing and dance along with your kiddos, Sparkle, Applejack, and more.

The tour will hit 22 cities across the United States in 2020, kicking it all off at The Ordway in St. Paul, Minnesota, in March. Tickets will be made available soon, and My Little Pony Live will star a bunch of your favorite characters, like Twilight Sparkle, Pinkie Pie, Rarity, Fluttershy, and Rainbow Dash, according to the show's website.

And fortunately, there are no shortage of My Little Pony Live shows, which will run roughly 75 minutes with a 15 minute intermission, as it'll hit both coasts, the north, south, and even the midwest. According to a press release shared with Romper on Monday, here's the full list of My Little Pony Live tour dates:

The show — which is being produced by by Hasbro and Mills Entertainment, according to Billboard — will follow the "Mane Six" as they and the rest of Equestria get ready for the blossoming of Ponyville's Rainbow Tree. The tree is meant to bring about "another hundred years of friendship," but there's one problem — the tree is in bad shape. In the live show, according to the press release, the "Mane Six" will set out to find a cure for the ailing Rainbow Tree. They'll have to rely on "strength, determination, creativity and — of course — the magic of friendship!" if they hope to achieve their goal, however.

If reading all those dates and getting the scoop on what the show's about got you eager and excited to pack up the kids and head out to a My Little Pony Live show, you're certainly not alone. Tickets aren't on sale just yet, but will be soon. According to the show's website, tickets and VIP packages go on sale to the public Friday, Aug. 9, so mark your calendars now.

My Little Pony Live is intended to be a family show, offering something for all ages, so parents will enjoy it as much as their kids. It may not be the My Little Pony you grew up with decades ago, but it sounds like it'll be just as fun and perhaps even more adorable.

More Like This
Here's Why 'Mean Girls' Is A Fetch Movie Choice For Families With Teens
'Clueless' Is, Like, Totally Still A Good Teen Movie In 2022
10 Of The Raddest Movies From The '90s To Watch On Girls Night
Marcel The Shell Is Officially A Movie Star