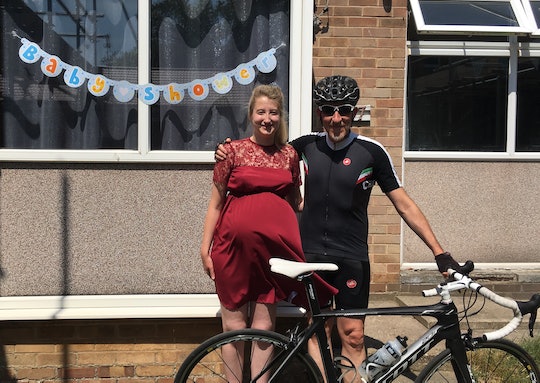 I Had A Low-Lying Placenta Blocking The Exit

A few years ago, if you asked me what a low-lying placenta was, I'd likely describe it as a deep sea creature that skirts along the bottom of the ocean. But, preggo and worried the placenta would block my baby's exit route, I learned a lot about "placenta previa" fast.

According to the Royal College of Obstetricians and Gynaecologists, a low-lying placenta (placenta previa) refers to when the placenta covers part or all of the cervix. Basically, it means the baby's feeding bag is blocking their way out, which can cause complications later down the line. In their document, Information for you: A low-lying placenta (placenta praevia) after 20 weeks, the Royal College of Obstetricians and Gynaecologists explains that in the second half of pregnancy there's a risk of heavy bleeding that, on rare occasions, could endanger the lives of mother and baby, as well as a greater chance that women with a low-lying placenta will need a c-section.

I was completely oblivious as to my placenta's whereabouts until the 20 week scan, which also happens to be the scan when you can usually find out the gender of the baby. We were super excited to know the baby's sex, as my husband and I decided very early on that we wanted to know if we were having a boy or a girl, not that it mattered of course, as long as they were healthy.

So after we were told our baby's sex (a boy, wahoo!) the sonographer looked a little confused and mentioned something about the placenta. I didn't pay too much attention at the time, as it was sinking in that we were going to have a son.

However, she wanted to "double check something," so she whipped out a probe and asked if she could perform an internal scan. At this point, I wasn't very concerned as my friend had mentioned she'd had one of these too. She fitted a condom on the probe and, if memory serves, lubed it up, then inserted it.

After having a good look about inside me ~gag!~ the sonographer confirmed that I had a low-lying placenta.

It didn't hurt at all and the procedure felt totally fine. The probe offered her a different angle in order to see the "bigger picture." After having a good look about inside me ~gag!~ the sonographer confirmed that I had a low-lying placenta. Naturally, having never heard of the phenomenon, we were pretty concerned by this point and asked a ton of questions.

The sonographer explained that we would be able to talk to our midwife about my oddly situated placenta in our next routine appointment, but in the meantime it was nothing to worry about — she told us it would likely move, but she was going to book us in for a scan around the 30-week mark to ensure the placenta had gotten out of baby's way. She also gave us some literature on low-lying placentas to read about in the meantime; some of which mentioned that we had to refrain from sex to avoid causing bleeding.

On top of this, when checking our baby boy's organs, she hadn't been able to get a good view of the goings on of his heart, so we were also booked in for another scan in a couple of weeks. For someone who's a recovering control freak, this double-whammy of unexpected news was pretty hard to take. It was difficult to stop my thoughts from going off down dark pathways, worrying about my baby's heart and the imagined future scenario if my placenta didn't move.

But, something that really helped me stay calm about generally everything during pregnancy was regular meditation. I resigned myself to accepting that I couldn't do anything about my placenta and there was no point worrying about my baby's heart, because, as it turned out, it was totally fine when we returned to have it checked.

Even though I was terrified at the thought of having a Caesarean, I accepted the fact that baby had to come out one way or another, and if being hoisted out of my abdomen was the only option then c'est la vie! In all honesty I'm rather proud of my pregnant self and how I took things in my stride. In fact, I'm a little jealous of past me and wish I could get back into that mindset now, as finding the time to meditate with a 6-month-old baby can be tricky.

Our next routine midwife appointment came round quickly and we were able to ask our many questions and double check some facts ourselves. It was great to discover that for 9 in every 10 women the placenta moves by the time the scan at around 30 weeks arrives, per the NHS. So we were hopeful that mine would too.

The midwife had an interesting analogy when describing my placenta's position. She explained how the placenta was attached to the wall of the uterus and told us to think of it like a balloon, with the part that you blow up being your lady parts. The midwife said as you progress through pregnancy, imagine your uterus like the balloon being inflated; the placenta usually remains stuck to the same part of the "balloon" (your uterus) so as it inflates, it will naturally climb higher up the side of the "balloon" and away from the exit. This was a funny, yet comforting metaphor.

Only 1.6 percent of low-lying placentas persist to term or near term.

Of course, this being my first pregnancy and me being the perpetual worry wart that I am, I still carried a tiny piece of anxiety like a little ant gnawing away at me, right through to the scan that confirmed whether my placenta had moved or not. I'd done a ton of research and I knew that it was rare for me to be one of the handful of people whose placenta would still be blocking baby's exit by the time I was ready to give birth — according to research by the American Institute of Ultrasound in Medicine, only 1.6 percent of low-lying placentas persist to term or near term — but I wanted it to be completely confirmed one way or the other.

It transpired that I was one of the lucky ones: when it came to my scan, my placenta had moved. I was over the moon as this meant I still had the choice to have a natural birth, unless of course during labour I needed an emergency c-section. I felt I'd been given a gift; the gift of choosing how I wanted to bring my baby into the world, rather than feeling totally helpless and as if everything had spiraled out of my control. Not that one can control childbirth.

So the moral of the story is, if you have a low-lying placenta, please don't waste time worrying about it. If it doesn't budge, look on the bright side and try to focus on how lucky we are to live in a time when these things can be found early and prepared for.

At the end of the day, your placenta might not know how to move, but trust — your baby sure as hell will.