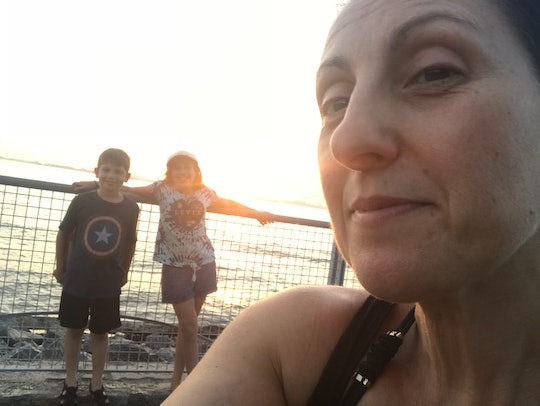 My Mental Load Overwhelmed Me, So I Unparented My Kids

Having a Type A personality, I’ve always executed extreme measures of quality control, and maybe control in general, and that has followed me into motherhood. My list-making, double-checking protocols, and intense attention to detail has served me well… until now. This year, when my daughter entered middle school, my son made a new, more serious soccer team, and I started a new job, I crashed. There were too many new things and complex emotions requiring more time and effort to navigate. My mental load overwhelmed me. The only solution was to be more hands-off with my kids.

At ages 8 and 11, my children definitely can go unsupervised for periods of time. They can be in their rooms, playing or doing homework without me. While, as a working parent, I always feel a little guilty that I’m not spending all my time at home with them, I don’t want to resent them for soaking up every second that I’m not at the office. It’s taken me over a decade to realize this, but prioritizing my needs is essential.

It’s something I’m doing more of, especially since I don’t want my kids to think they can always rely on me for things like getting them a glass of water, supervising their homework while they’re doing it, or making sure they don’t forget their water bottles. They are old enough to take on more responsibility, and to recognize there will be consequences if they don’t step up. My son didn’t really enjoy having to take the pink thermos when he left his at school, but hopefully that has taught him to be more aware when he packs up at the end of the day.

With all the newness in our lives this year, I just didn’t have the brain space I was used to employing when it came to keeping our household running. There was nothing rote yet about my new job. There was infinitely more communication with my son’s soccer team, across all the practices and games that we had to now travel to across the city. My daughter doubled the nights she had dance class, since she was moving up to a more advanced level. And then there was the homework.

The culture of her middle school is in stark contrast to that of her elementary school: where teachers were more nurturing in the lower grades, this sharp turn into a world of intense standards felt too abrupt. She needed guidance on how to manage her time. I realized she also needed to prioritize, and to know when to let things go.

I didn’t have the energy to enforce my kids’ nightly showers, so those happened less frequently.

I had already begun to let things slip. I didn’t have the energy to enforce my kids’ nightly showers, so those happened less frequently. There were many meals served without vegetables. Maybe I didn’t offer any, or maybe I did and they refused to eat them and that wasn’t the battle to pick. My daughter hasn’t had a haircut in half a year. My son lost one of his good gloves and I don’t have time, or keep forgetting, or maybe just resent him for constantly misplacing things, but I haven’t replaced it. “Keep your hands in your coat pockets,” I tell him. Good enough.

That is my new standard: good enough. Success is measured in basic terms: I didn’t screw up at work, my kids’ homework is done, they’re fed, there’s a roof over our heads, and even though I might have hit the wall of frustration and exhaustion and aggravation and yelled at somebody — or everybody — I made sure to recover and apologize, and reassure my kids they are safe and loved. It takes more than cuddling to convey that these days, though. So I have to let some parenting standards slide, if I’m to accommodate these surges of prickly emotions that our current lives are bringing.

I always thought that kids need their parents more as they got older, not less. As a parent of babies and little kids, my role was to love them and keep them safe. All that was task-oriented and I built those routines quickly. Sure, I was constantly evolving the food preparation, the sleep schedules, and the childcare needs as they reached new stages, but I could automate a lot of it almost immediately. We kept consistent schedules, so even as they shifted in response to our children’s growth, it was gradual.

When they were little, my husband and I just tried to clear the hard things from their path. We held their hands crossing the street and cut up their food in tiny pieces.

Now, though, as a mom to a tween and a third-grader, I am needed in different, more intense ways. Their emotions are bigger, their disappointments are deeper, the fallouts from their mistakes are more dire (in their opinions, anyway… so what if the thermos is pink?). To parent them now requires a different toolkit. I can’t just kiss it and make it better (though I still try). I have to put in the time. I have to sit with them while they work through confusing feelings, and their own struggles with being overwhelmed. I have to be a role model so they can see what it takes to work through hard things.

When they were little, my husband and I just tried to clear the hard things from their path. We held their hands crossing the street and cut up their food in tiny pieces. We could, to a certain extent, control their world. That is no longer the case. Now, our job is to help them control their responses to a world that doesn’t always embrace them. I am trying to do that by example.

I don’t get on my kids for keeping their room neat, but I also don’t help them find toys amidst their mess. I have loosened my grip on the run of our house, which means my husband has taken the reins in areas such as decluttering, cooking, and laundry. I mostly can’t stand his methods, but I don’t get to have a say, because I’m no longer the one driving those forces. My time and energy is needed elsewhere, at least for now. As I unparent my kids in some ways, I’m more in tune to their feelings and emotional needs than I’ve ever been. My stress has made me better at recognizing theirs. Maybe change is good.