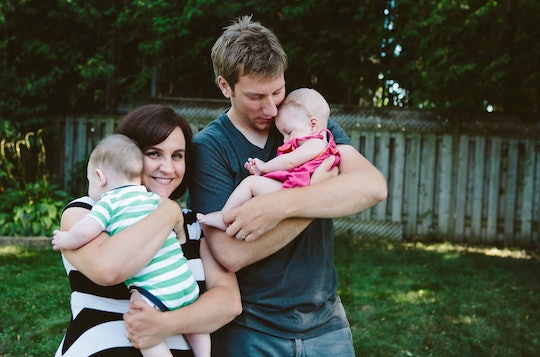 When I was 21 weeks pregnant with my twins, I went for a routine ultrasound. I'd had a rough pregnancy up until that point — I was super sick, and overwhelmingly exhausted at all times — but I felt like I was finally on an upswing, and sitting in that waiting room, I even felt my son kick for the very first time.

I didn't know that within a few hours, I'd be sitting in labor and delivery at a nearby hospital, after my scan revealed signs of pre-term labor. As I waited to see the obstetrician on call, I tried to reach my midwife, hoping she'd be able to help in some way. But what my midwife said about my pre-term delivery made what was already a traumatic event feel so much worse.

Before I knew I was actually expecting two babies instead of one, I had decided to see a midwife for my prenatal care. I'd never been pregnant before, and I was concerned by reports of unnecessary C-sections and other interventions done in hospitals during births that likely would have gone just fine if the doctors had just waited them out. The more I read about so-called "natural" or "gentle" births and watched documentaries about midwifery, the more I liked the idea of a more hands-off, laid-back approach. I'd also had a number of friends who had great experiences with midwives (some of whom even had home births), so I was pretty sure I was in good hands.

When I found out that I was expecting twins, my midwife explained that my birth was now high-risk, and outside her scope of practice. I would ultimately have to have an obstetrician, she said, but since I was young, healthy, and about as low risk as you can get in a technically high-risk pregnancy (my twins were dichorionic/diamniotic twins, which basically means they were totally separate, and thus, less likely than other twin types to experience serious health complications), she told me that if I wanted to, I could continue under her care until I reached 30 weeks. It was music to my ears.

As I continued to see my midwife for my regular checkups, she did a great job alleviating any concerns I had. When I started experiencing sharp, electric-shock type pains that would come out of nowhere and make me yelp in pain, she commiserated. "Unfortunately, being pregnant with twins kind of always feels like being in labor," she said, with an encouraging smile. But then she reminded me that plenty of twin mothers-to-be end up giving birth to healthy, happy babies, and there was no reason why I couldn't also be one of those women.

During my 21-week ultrasound, my biggest concern was finding out the babies' sex. I'd been up half the night in anticipation, hoping that at least one of the babies was a girl, because truth be told, I'd always dreamed of having a daughter. So when the technician confirmed that, yes, my minimum vagina quota of one had been met, I was thrilled. But she didn't look so thrilled about it. And then, a few moments later, when she left the room and told us to hold tight, I didn't feel quite as thrilled either.

I could hear her telling us that something was wrong, and I could see in her face that it was probably a big deal, but that didn't mesh with what I thought I knew to be true, which was that I was young and healthy and a "low-risk" high-risk pregnant person.

When the technician returned, she explained that my cervix was far too short for someone only 21 weeks along, and, worse, that it was actually opening and closing, which is bad news. (This condition is called cervical insufficiency, which can cause you to go into labor between 16 and 24 weeks.) She told us that she'd already called the hospital to let them know what was going on, and that she wanted us to go over there immediately.

I was honestly confused by her concern. I could hear her telling us that something was wrong, and I could see in her face that it was probably a big deal, but that didn't mesh with what I thought I knew to be true, which was that I was young and healthy and a "low-risk" high-risk pregnant person. Maybe I would even give birth under an oak tree with no drugs, because birth was beautiful and natural, damn it, and there was no way I was going to have doctors and epidurals and C-sections taking that away from me.

As my husband Matt and I sat in the labor and delivery waiting room, watching pregnant women and their partners come and go excitedly, we both felt like we absolutely did not belong. We were supposed to be just like those other couples in a handful of months, excited and nervous to give birth and meet our babies, with a bag packed from home containing impossibly cute outfits. But that was still so far off, we figured. There was no reason why we should be sitting there now.

"You know what?" I said to Matt as we waited. "We should just wait for the midwife to call. I'm sure this probably isn't nearly as bad as it sounds, and the only person we've even spoken to so far is the ultrasound tech, so let's wait until we hear from someone who knows us and knows the babies before we freak out completely."

Matt agreed, and then, as if on command, my midwife did call. I answered the phone, feeling relieved to see her name on my caller ID, and told her where we were, fully expecting her to comfort us and tell us it was just a silly precaution. But her voice was tense.

"Alana, this is very, very bad," she said. "Your cervix has to stay long and closed to keep those babies in, but that's not what's happening."

My mind went blank at that moment, not able to process what she was actually saying. "Um. OK. So, what's the game plan?," I asked.

She was silent for a few moments before she responded. "The problem is that, given the way your cervix looks, you could go into labor at any point right now," she said. "And if labor starts, there won't be any way for anyone to stop it."

At that moment, all I wanted was to get off the phone. I wanted her to stop saying these scary, awful things and I wanted to go back to being a pregnant person whose biggest concern was that I had to get up 15 times a night to pee. I felt tears welling up in my eyes as the reality of what was happening began to sink in.

"Your pregnancy at this point is too high-risk to be under my care, so you'll be automatically transferred to the OB you see at the hospital today. They will be monitoring you from now on," she said. "I wish you and your babies the best of luck, OK?"

Her voice was tense. "Alana, this is very, very bad," she said.

After our call ended, I promptly burst into tears. I explained to Matt that, actually, this was a big deal and, actually, we were probably totally screwed. Making things even worse was the fact that we were technically in caregiver limbo — I no longer had my midwife in my corner, and I had zero idea who the OB was who was about to be assigned to me. How was this happening?

Later that day, we saw an OB, and he told us that our only shot at saving our babies from being born before viability and dying would be an emergency cervical cerclage, which basically meant that they'd attempt to stitch my cervix closed to buy me more time. But they couldn't guarantee that it would work, or even that they could manage to get the stitch in there in the first place. And if something went wrong during the procedure? Game over.

We opted to do the stitch anyway and hoped that it worked out in our favor. The good news was that the procedure was successful. The bad news was that, even with the cerclage, I only managed to stay pregnant for just over another month: my twins, Madeleine and Reid, were born at 25 weeks gestation after a few weeks of strict hospital bedrest. They each weighed less than two pounds, and spent almost four months in the NICU after their birth.

My kids are almost 4 years old now, and I'm so happy and grateful to report that they are happy, healthy, thriving children. But I can't help but think back and wonder about my pregnancy, and all of the what-ifs. What if I hadn't had a midwife? What if I'd opted for an OB from the start, or better yet, one that specializes in high-risk births? What if I'd been better prepared for the reality of an extremely pre-term birth? The answer, of course, is that I don't know. That nobody could possibly ever know.

I wish I had known a bit more about the reality of what birth ends up looking like for all the women out there just like me. I wish I had known that, even though some women do get the blissful home birth I originally wanted, modern medicine has helped make birth so much safer for those of us who, in reality, likely would have ended up dying due to complications, or watching their children die.

I don't blame my midwife for the outcome of my pregnancy. I don't even really hold it against her for being so optimistic about my chances of a full-term delivery at the beginning of my pregnancy, because her optimism felt supportive and gave me hope. But when I needed her the most — when it felt like my pregnancy was falling to pieces around me — I ended up feeling entirely alone.