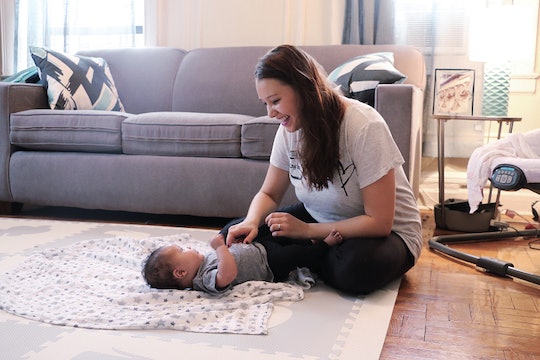 My Nesting Impulse Was Totally Out Of Control

My husband and I did things a little backwards during my first pregnancy. Because he was in the military, I lived with my parents before we got married when I was seven months pregnant. When the baby was 5 weeks old, we moved in together.

During my second pregnancy, however, things were different for our little family. We were all settled under one roof and even though we both wanted to get more space, being able to get our tiny New York City apartment in order helped me feel more in control. This time around, my type-A personality was raging. In fact, after a while, my fairly normal pregnant lady nesting impulse evolved into a full-blown, need-to-get-rid-of-everything addiction.

According to the American Pregnancy Association, nesting during pregnancy is defined as "the overwhelming desire to get your home ready for your new baby," which involves intensive cleaning and decorating. But for me, I feel it’s necessary to add an addendum to that definition: nesting is “the overwhelming and all-consuming desire to purge every piece of shit in my home that I haven’t touched in a year and redecorate every room in our apartment until it feels complete."

There doesn't appear to be a physiological basis for the nesting impulse, though What to Expect says that it has to do with “an increase in the amount of adrenaline coursing through your system around week 38 or week 39.” But for me, the nesting phase began pretty much mid-pregnancy and lasted until I gave birth.

It started when I was about 28 weeks pregnant, when I decided to buy a new couch. We had to have it right then and there, and I wasn’t willing to wait for it. The research phase transitioned into the "cleaning and prepping for the new couch" phase, which ultimately led to me reorganizing our entire living room (see below for "before" photos) and throwing away everything in my path.

It started with cleaning out the closets. Then I moved on to donating kitchen appliances and clothes. Every drawer in our apartment had been cleaned and organized. The white T-shirts with the armpit stains in my husband's drawer that had been bugging me forever? Gone! The bulky drink serving station that was a gift from my mother-in-law that we never used, because no one throws parties when they live in a shoebox? Goodbye! Every single toy that our 8-year-old stopped playing with? They were donated to a child who would actually appreciate them.

Clutter became my worst enemy. Every item in my home had a place, and it was expected to be stored there. My husband and son thankfully went along with it, brushing it off as a weird pregnancy quirk. Did I get on their nerves? Absolutely! But they couldn't deny how clean and beautiful our home was now.

Nesting gives us a sense of calm during the chaos of pregnancy, helping us feel like we are organized and able to take on exhaustion and stress.

Although I might have taken my nesting impulses a bit too far, I'm far from the only pregnant woman who's been overtaken by the urge to reorganize. A study done by McMaster University revealed that “there's an overwhelming urge that drives many pregnant women to clean, organize and get life in order," so it’s not irrational at all (please, tell my husband this).

"Nesting is not a frivolous activity," Marla Anderson, lead author of the study and a graduate student in the Department of Psychology, Neuroscience & Behaviour, wrote in a press release. "We have found that it peaks in the third trimester as the birth of the baby draws near and is an important task that probably serves the same purpose in women as it does in other animals. It ties us to our ancestral past. Providing a safe environment helps to promote bonding and attachment between both the mother and infants."

In short, moms want everything to be perfect and in their right places before our new little ones makes their way into the world. Nesting gives us a sense of calm during the chaos of pregnancy, helping us feel like we are organized and able to take on the exhaustion and stress that having a new baby will bring into our lives.

After every useless item in my house was purged, it came time to redecorate. Redecorating my apartment was pretty much all I talked about, thought about, and even dreamt about. It consumed my thoughts so much that I even began reserving parts of my to-do list for researching and purchasing specific things. I had basically swapped out one obsession with another.

Thank goodness for Amazon Prime, because I was ordering up a storm until we had new sheets and comforters on every bed and new everything in the bathroom. But our living room was where the real magic happened. We got our beautiful new couch about six weeks before the baby was born, just enough time to add new lamps, end tables, and wall decor into the mix. I had never felt so at home in my life.

One day, I found an amazing deal on a lamp that matched our exact color scheme and was only on sale at the Target store. I insisted that we pick my son up in the car at the bus stop so we could pick it up, because I needed it that day. My husband and son humored my craziness and went along with it, knowing that the "crazy lady" would disappear when our daughter was born in a couple months.

Yet the nesting impulse didn't quite go away postpartum. In fact, it stuck with me a little bit after I had the baby. I have a newfound need to live a completely clutter-free life, and I’m OK with that. We buy furniture that doubles as storage and refuse to keep every piece of artwork that comes home from school with my older son. And you know what? I feel peace at last.

More Like This
Ashley Graham On The “Fun, Organized Chaos” Of Raising Twins
These Stepmother's Day Instagram Captions Are Straight From The Heart
Stepmom Quotes & Sayings For Every Occasion
What You Need To Know About Using Hair Removal Cream During Pregnancy