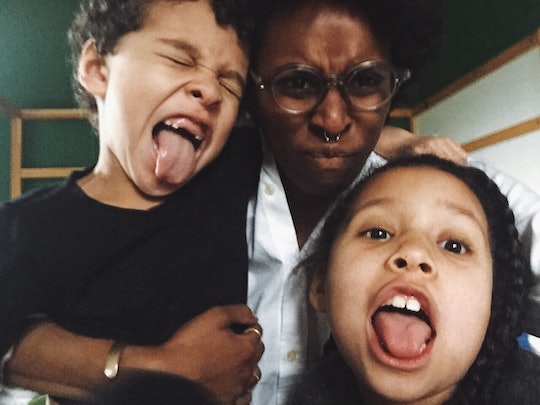 I've always enjoyed parenting with my children's dad, my ex-husband. Even though we're no longer together, our parenting style remains very much in sync. From discipline to how we feed them to how we dress them, we've somehow always been on the same wave length. And even though we're divorced, one of the best parts of becoming a parent was becoming one with my ex-husband. It never occurred to me that there would come a point that we would eventually separate, raising kids in two different homes, and then with two other people alongside us. But here we are. Sometimes, my new partner disciplines my kids. And even though I love and respect his relationship with my children, I'm not totally sure how comfortable I am with that.

Transitioning to sharing the responsibility of parenting and disciplining with another adult who hasn't been apart of the upbringing of my children since the beginning has been an adjustment. I've been with my partner two years — this month! — and we just got engaged to be married and moved into our first home together. Over the last two years, we've shared many experiences together: we've traveled, moved in together, learned to navigate a relationship with my ex-husband, met each others' families, and shared thousands of tiny magical moments in between. The one thing that I've been more reluctant to share with him, though, is the role of co-parent. With my ex, co-parenting felt natural, and to be honest, this feels less so. I'm protective of my children, especially when it comes to giving an opinion about who they are and how they act. In the beginning of our relationship, even in situations where my partner supported me or backed me up as I disciplined my children, I felt defensive over the role he was trying to fill.

Selfishly, I want Noah to already be on my page; I don't want to teach him while I'm trying to teach my children, and I'm not sure I want to share them, either.

Despite the fact that my ex-husband and I are no longer married, I respect who he is to me and especially who he is to my children. I never, ever wanted to "replace" his role, and even though I knew a stepparent entering our lives wouldn't do that, it still felt I was doing exactly that.

It feels as if an outsider has entered the most intimate spaces of my parenting and I'm trying to learn how to create a specific space for him. It's uncomfortable at times, exhausting at others.

For a long time I felt the role of "serious parenting," which mostly meant disciplining our kids, was limited to me and my ex alone. The first time my partner shouted at my son when he was trying to do something he wasn't supposed to, I corrected my partner and asked him not to tell at my child. He argued that it his reaction was warranted, but when I said, I'm the parent! it led to us a serious conversation about what Noah's role as my partner should and would be when it came to parenting. I wasn't ready to have this conversation, so it ended pretty quickly. We'd only been together for a year at the time and I didn't know what I wanted from a partner who was committed to me and to my children. I'd never thought about how they'd be the person helping me parent and raise my children. And that was intimidating.

Watching him grow into his own parenting role has been fascinating for me to watch.

Noah and I both believe in explaining to the kids why they can't do something (either because it's naughty, unsafe, or morally and legally wrong), giving out warnings, and putting the kids in timeout and taking away other privileges for bad behavior. Though Noah and I are usually on the same page when it comes to discipline and punishment, every so often we disagree and I get really defensive. When he challenges me, I feel like it's a poor reflection on me and how I've chosen to parent, like maybe I'm doing something wrong. Sometimes I lean on excuses like, I've been doing this longer than you have. I know them better than you do. You don't understand! but I forget that he's offering another perspective, one I probably haven't thought because I've been parenting and disciplining my children in a particular way for the last seven years. I usually can't arrive at the conclusion that he's just trying to be helpful until way after the fact. It's been an ongoing struggle and process. It feels as if an outsider has entered the most intimate spaces of my parenting and I'm trying to learn how to create a specific space for him. It's uncomfortable at times, exhausting at others.

I've been operating under the rule that in my home, I'm the main parent, and in my ex-husband's home, he's the main parent. Now, that's all changing.

Though I fight and drag my feet about giving Noah more space to be a parent, he meets me with patience. He's learned to be more calm when reprimanding the children, less shouty, less panicky. It's something I've had to adjust to: his constant panic and his fears over the children getting hurt. I've had time to grow into the role of parenting, and this — life with children — is all new to him, and he's just beginning to learn that feeling like everything is a danger and everything is a threat and everything is impossibly dirty and gross and no, you cannot touch that! is what parenting is all about. Watching him grow into his own parenting role has been fascinating for me to watch.

But for all the fun it's been watching Noah find himself as my children's stepfather, I'm still learning how to let him discipline them as well. I've been operating under the rule that in my home, I'm the main parent, and in my ex-husband's home, he's the main parent. Now, that's all changing. Honestly, I don't know if I'm always grateful to have a partner who back me up and helps me follow through with punishments and reprimanding the kids when they misbehave. Doing it on your own is tiring and hard, but before meeting Noah, I'd gotten used to that.

My ex-husband and I were so good at parenting together and maybe I sometimes miss that. I miss that we started on our parenting journey together and now I'm on a new one, and someone else is joining me part of the way down. Selfishly, I want Noah to already be on my page; I don't want to teach him while I'm trying to teach my children, and I'm not sure I want to share them, either. I can't figure out if this is because I'm partially afraid of starting down this path with a person only to potentially lose them as my co-parent eventually, or if I just want to keep him at a distance because these are my children.

Either way, we all live in this house together, and there are moments I don't catch things the kids do when they happen, so I've learned to sit and let Noah have some ownership in disciplining them. Each time I do, it gets a bit easier than it was the last time. I don't jump up and run to my son or daughter's defense. I try to stand alongside Noah, to help him find his way. I want him to know that, just like he does for me, I support him. It's not simple, and I've yet to figure out the formula to feel like this every single time, but I'm trying.