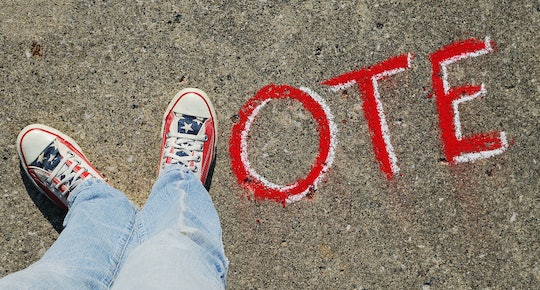 My Partner Doesn't Think Voting Is Important, But I Disagree

I've always been thrilled by the democratic process. I was a straight-A history student throughout middle and high school, and (nerdy as it may be) I could not wait for the chance to vote when I turned 18. At the time, I was naively hopeful when it came to politics, but even as the years went on and I became more savvy to the corruption and money that comes along with running and maintaining our American democracy, I still never lost interest in my favorite civic duty. Then I met my husband. Even though I think voting is one of the most sacred things we can do as Americans, he doesn't find voting important.

I believe voting is an important responsibility, and it's one I take very seriously. Even when I'm stretched to the limit on time, attention span, and general sanity, I make sure to do my homework for midterm elections. I've never once voted a single pull ticket — each office, candidate, and ballot measure gets its due attention from me. I care about the way my local government is run, and I understand the vast importance of midterm elections in the overall running of our national government.

During presidential election season, I follow candidates closely, listen to live streams of debates while preparing chicken nuggets for my kids, and read up on the most important issues for 2016 during nap time. I value my right to vote, and I try to do the democratic process justice, as best as I can. It’s hard with three young kids running around, but I make politics a priority for me, even if that means sifting through ballot measures on my phone while rocking a sleeping baby.

My husband, however, thinks this is ridiculous. He regularly counts his vote as a “throw away” by voting for an independent party candidate whom he's done no research on whatsoever. Sometimes, he doesn’t even bother voting in midterms.

His cavalier approach to politics doesn’t surprise me. I understand why many, like my husband, think there is no point in voting, because they believe their individual votes don’t really count. If he doesn’t vote, the results don’t suddenly tip in the opposite direction. Why put in the effort when it won’t make an obvious difference? Or any difference at all? When the system is corrupt and there’s no one worth voting for, why bother?

It’s hard to escape that despondent feeling when you look at a government that isn’t working, and you’re given a choice between two candidates who don’t align with your values at all. It’s frustrating to listen to politicians skirt questions you want answered. When you feel like change will never really happen, it all seems a bit contrived. I’ve been there. I’ve wrestled with those emotions too.

It'd be easy for me to give in to those feelings and give up on voting altogether. Trust me, it would. But when I look at my kids, I know I have more than just a civic responsibility to vote. I cannot simply let go of the future of our country with a hopeless attitude. I need to believe in our future — in their future. I need to show my children that their voices do matter and that their votes have the power to shape our society.

I want my kids to feel empowered by their right to vote. I want them to feel the thrill I feel when I walk into the polling place, cherishing the time I wait in line (and not just because I am usually sans children), because so many do not have the privilege of having a voice in their government. My voice may be small, but it still matters. It is still valuable. It is still worthy.

More Like This
How To Approach The Topic Of Emotional Labor With Your Partner
How To Ask Your Partner For Support When You Need It
This Is What Happens To Your Vagina When You Stop Having Sex
How Do I Rediscover My Sexuality When I’m Completely Touched Out?