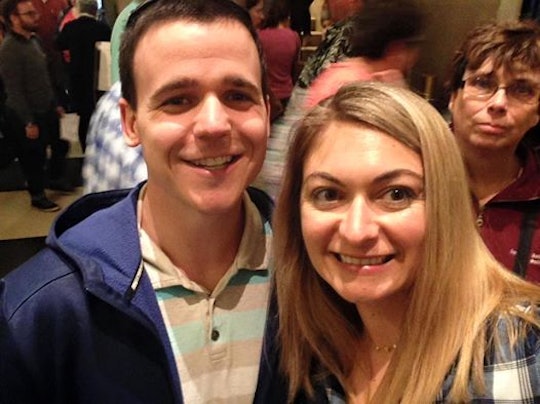 We Rarely Have Sex, But Our Bond Is Stronger Than Ever

Back before I had kids, I considered myself to be somewhat of a sex expert. A sexpert, if you will. My husband and I thoroughly enjoyed our nights alone (and mornings, and sometimes in the middle of the afternoon on the weekend). But then we had twin boys. I told myself that we wouldn't succumb to the stereotype of being a married couple who rarely has sex. I swore I'd still wear cute nighties and shave my legs on a regular basis. He promised he'd always be up for trying new positions, and just "up" in general.

We were, of course, lying to ourselves.

Four years later and it turns out our friends with kids were right in trying to warn us — we definitely have way less sex now that we're parents. If we're talking numbers, I'd say once a week on average, less during October-March when there's always at least one person in the house with a cold. But even though we don't meet up on the mattress often as we used to, our relationship is actually better than ever.

Part of the reason why our dry spell works for us is because we know we'd have sex more often if we had the time. I work evenings Sunday through Thursday night. By the time I'm finished with work I'm usually too tired to do anything but wash my face and pass out. That leaves weekends to have sex, but when it's 8 p.m. and the kids are still settling down in their room, we don't want to risk starting sex if they suddenly need a drink of water or help finding a sock. They may be 4, but I don't think they'd buy the whole, "We're just wrestling" excuse. So we'll wait them out while watching a movie or show. Sometimes we're ready for action by the time the show is over and other times one (or both of us) is snoring.

For some couples, having sex so infrequently might cause a problem in their relationship. I'll admit that when I first started working at night we found ourselves more snippy with each other. Part of it was that we were sexually frustrated, and needed to work on actually having sex when the opportunity came up. Mostly, my discomfort with the situation came from the fact that I felt like there was something wrong with us, that everyone else was probably having way more sex than we were. But when I asked around, it seemed like all of my friends with babies or preschoolers admitted their batting average took a huge hit once they became parents.

What really helps keep our relationship strong in spite of a slow sex life was the fact that we started communicating more. Rather than let our lack of sex be a giant elephant in the room, we started talking about the reasons why we weren't having as much sex as we used to.

I stumbled across this study of 30,000 Americans that found once weekly sex seems to be the threshold for a happy relationship by Amy Muise, a social psychologist and postdoctoral fellow at the University of Toronto-Mississauga. Couples who had sex more than once a week weren't any happier than ones who had a standing Saturday night bedroom date. It was only when sex was less frequent than once a week that it started to negatively impact the relationship. Knowing we weren't alone and that we weren't unintentionally sabotaging our marriage made me feel better. I stopped worrying so much about keeping a running tally. Now I focus instead on enjoying myself when the sex does happen.

There's something to be said for quality over quantity. I used to think it was sexy how we'd try to have sex as many times as possible in a single night, but to be honest, anything that happened after the second round was all kinds of sloppy. There comes a point when your sex organs become super slippery and sort of numb, but when you're trying to break your record for number of times in a night, you both pretend that you're more into it than you really are.

My partner and I talk about those times now and laugh at how focused we were, as though the number of times we humped directly correlated to how happy we were as a couple. Yes, we were in love then, but I feel like we know each other so much better now that we have open and honest conversations about the nitty details of our sex life. Because we can be more honest with each other and because we don't have sex as often, when we do have it, we try to make it special. Not that we need costumes or props, but that we try to take our time and enjoy what we're doing instead of rushing through so we can get back to our respective phones as we sometimes did when we had sex several times a week.

I still look forward to spending time with my partner outside of the bedroom, laughing with him, hearing his opinions on things, and having entire conversations with each other with just a single look.

But what really helps keep our relationship strong in spite of a slow sex life was the fact that we started communicating more. Rather than let our lack of sex be a giant elephant in the room, we started talking about the reasons why we weren't having as much sex as we used to. Both of us acknowledge that we still find each other attractive and that we want to have sex, it was just that we're at a point in our lives when our evenings are really busy, raising preschoolers is exhausting, and we don't have time alone together during the day. For us, knowing that the other still desires us and finds us attractive goes a long way towards satisfying the sexual part of our relationship. I may not get off when my husband wolf whistles as I step out of the shower, but little things like that help keep our romantic spark alive until the next time we can do something about it.

As time goes on and we've been together longer and longer, I realize there's so much more to a relationship than sex. Before we had kids, when we went on vacation the first thing we'd do after unpacking our bags was unpack each other. Now going on vacation means a week of abstinence, because we share a hotel room with the boys and I'm not about to get my freak on with them in the next bed, and I don't care how deeply they're sleeping or how dark the room is. But it's OK because I still look forward to spending time with my partner outside of the bedroom, laughing with him, hearing his opinions on things, and having entire conversations with each other with just a single look.

Sex is just a small part of a marriage. If something were to happen to one of us where we were physically unable to have sex, it wouldn't change the way we feel about each other. In my single days I had great sex with people I didn't share a strong emotional connection with. It's awesome when you can have a ton of sex within your marriage and enjoy it, but I feel like a couple can't survive on simultaneous orgasms alone.

My marriage is rock solid because we communicate with each other, enjoy being together, and fully appreciate the sex we do have when we have it. A relationship without a ton of sex doesn't mean it's a relationship that's devoid of passion. It's because we love each other so much that the frequency of our sex life doesn't make or break our bond.