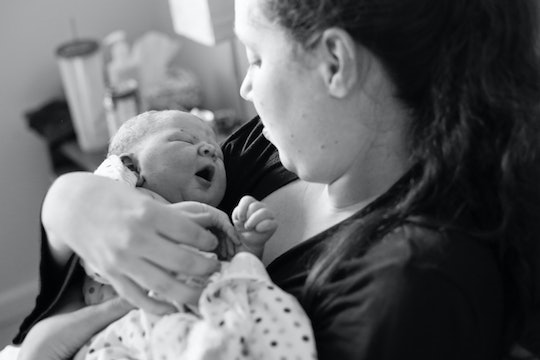 My second baby was born at home. And I get that having a home birth isn't totally conventional. I was prepared for naysayers, and for people to question home birth's safety, but I definitely did not expect to be questioned by my pediatrician, who, up until the moment my daughter was born, was supportive of my decision to give birth at home. And more than questioning my decision, my pediatrician refused to take my daughter as a patient for one unbelievably ridiculous reason: because she was born at home.

What's infuriating is that my pediatrician even signed off on a letter my practice of midwives provided. The letter explained how carefully they screened their patients. And my midwives were very conservative in providing home birth services. If there were any concerns or complications in my pregnancy, they would've transferred mine and baby's care to an OB-GYN immediately. But they didn't. Because we were both healthy. The letter also described their newborn exam process. As Certified Nurse Midwives (CNMs) they are trained nurse practitioners and as such, are qualified to give the exam and provide vitamin K injections — injections given to newborns after birth and the erythromycin eye ointment.

I liked this pediatrician a lot. In my oldest child's first two years, we had moved and changed insurance plans multiple times, and as a result, we'd been bounced around between a lot of pediatricians. I was so happy when we found this particular doctor because he was close to our home, the waiting room was pleasant, everyone who worked there was kind, and the pediatrician himself was calm and reassuring and great with my son. Once I had the letter signed, I was happy that my next child would have the continuity of care my son never did. With that squared away, I made all the other plans and arrangements that you make to plan for a home birth.

My daughter's birth was perfect. There were no difficulties or complications. She was born a healthy size, with a strong set of lungs. She passed every part of her thorough newborn exam with flying colors. Once the celebration and excitement of her birth calmed, I told my partner to call the pediatrician. The letter he had signed had included an agreement that he'd see the baby within the first 24-to-48 hours after the birth. In a hospital, the newborn baby is monitored and checked during the stay. At home, the midwife wants to make sure the baby is being seen or checked up on a few times in the first few days. The midwife also needs to make sure that the baby has pediatric care lined up because her job as the baby's main care provider is only for the first day or so. So we made the appointment and our pediatrician signed off on it. I thought everything was fine. But I was wrong.

It's a scary thought that I could be rejected by a practice of pediatricians all because I chose non-traditional birth method after an otherwise healthy pregnancy and a complication-free labor and delivery — one that had been presided over by a team of incredibly trained and talented midwives.

An hour or so after I'd made an appointment with our pediatrician to see my newborn daughter, my phone rang. It was the doctor's office. The receptionist sounded a bit huffy right off the bat. "Where did you deliver?" she asked me. I told her my daughter was born at home. "So she hasn't been seen by a pediatrician yet?" I explained that, no, she hadn't, but she had been examined by a highly trained midwife and that she had received the same care she would have in the hospital. Alarm bells were ringing in my head and I was suddenly very defensive.

I was so mad and frustrated and desperate in that moment. It's a scary thought that I could be rejected by a practice of pediatricians all because I chose non-traditional birth method after an otherwise healthy pregnancy and a complication-free labor and delivery — one that had been presided over by a team of incredibly trained and talented midwives. If something went wrong with my daughter, we'd simply have to take her to the ER for medical treatment. I asked,

But isn't that the service you provide? You guys are a practice of pediatricians. She's less than a day old. She won't even be 24 hours old when we come in tomorrow. It isn't rare for a newborn in a hospital to not have been examined by a pediatrician in that time.

I was blinking back tears. I said, "The doctor signed a letter saying he'd care for my baby."

"I'm sorry, but for liability reasons, we can't take your daughter as a patient," the woman said. I could tell she was annoyed at having to deal with me. I'd like to give her the benefit of the doubt and say that maybe she was just the messenger delivering some bad news that came from insurance companies or lawyers or someone further-removed from the people who care for babies and children day in and day out, but I'll never know.

The American Academy of Pediatrics (AAP) doesn't officially recommend home birth, saying that it is safer to give birth in a hospital or a birthing center. As someone who has given birth at home and at a birthing center, I can pretty confidently say there wasn't a whole lot of difference in my experience. My midwife was equipped with all the same things they had at the birth center. But the one thing that makes me upset, is that even though the AAP suggests giving birth in a hospital, they underline how important it is for families to make this decision. They also underline the need for pediatricians to provide care for infants regardless of the birth.

When I asked the woman what she suggested I do, she offered no alternatives. I understand home birth isn't exactly mainstream at the moment, but I was surprised they hadn't come across this issue until now. Once I hung up and cried and explained everything to my partner, all while gazing down at my perfect, healthy daughter, I got on the phone with my midwife.

The midwife shared my disbelief. But she was also very reassuring. She provided me with names of pediatricians in the area she knew would accept a home-birth baby. She also told me that if I couldn't get in to see someone in the next day, she'd do her home visit earlier than we'd arranged. She could take vitals and listen to baby's heart and breathing. But I still needed to arrange for a pediatrician to monitor my daughter's bilirubin and to give us the referral we needed for the PKU testing and the hearing test. I needed to establish a relationship with a doctor who would care for my daughter when the midwife couldn't any more. And that day was quickly approaching.

Perhaps it was a blessing in disguise. The pediatrician we saw after that was incredibly well-informed and open about home birth. She did another newborn exam the next day. She reassured me that my midwife had provided every service she would expect.

Finally, I could relax knowing my baby and my son were in good hands, with doctors whose philosophies more closely resembled my own. But I will never forget the panic and anger and hurt I felt when that first practice refused care. I've tried to understand the issue with liability, but I would have signed anything they asked me to so they could cover their butts. All I wanted was care for my daughter. She was healthy. If they were so mistrustful of the care the midwife gave to my newborn, shouldn't they be eager to double check her exam findings? Shouldn't they want to provide care to a baby who needs it?

Sometimes I want to walk back into that office and ask what happened. Why was it OK with the doctor but not OK with the practice? Although, ultimately, it wasn't up to the doctor himself. It was up to the practice's legal advice and input from insurance companies. They didn't want to be stuck with a baby who may have serious issues that had gone undetected and then be sued for it. To some degree, I can understand that. But I was confident in my midwife's training. I was confident I had her as well as a birth assistant who was also trained in infant resuscitation in attendance at the birth. I think there is still a pervasive myth that midwives are irresponsible and untrained. And in our country, doctors have to make a lot of decisions based solely on the need to protect themselves against lawsuits.

Even now, years later, I wish I could appeal to them. I want to ask them to reconsider their opinion. I want to inform them about just how highly trained CNMs are — especially mine. I want them to look at studies about the health and safety of babies under CNMs care and who were born outside of a hospital. I want to tell them that I'll never forget how they made me feel. In a moment when my emotions were raw and fragile, they made me feel persecuted and uncared for. In a moment when my daughter needed them, they turned away. That's something I'll never be able to get over.