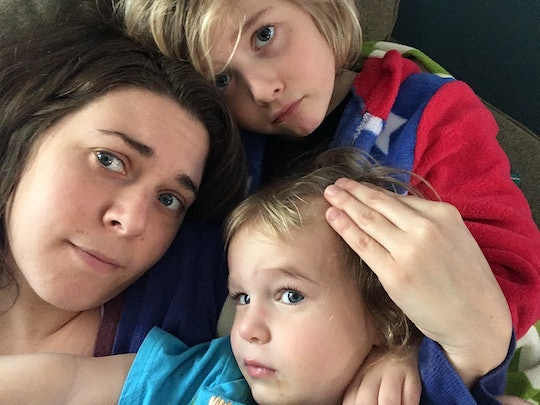 My Postpartum Periods Are An Actual Nightmare

I’m lying on the couch, a heating pad resting on my tender belly, feeling completely and utterly defeated. It’s the end of a day that’s dragged on and on. Earlier, I snapped at the kids over nothing and I feel incredibly guilty, so I will likely spend the rest of the evening beating myself up over it. I just want to drown my sorrows in a giant glass of red wine, so I pour myself a glass and return to my spot on the couch, hoping to simply be left alone.

Every month, when my period is lurking around the corner, time feels like a slow crawl across a gravel parking lot. These days, I don’t need a calendar or a graph or an app to tell me when my period is coming. I can tell it's coming from a mile away: my mood changes, my muscles ache, and I'm totally consumed with anxiety. When I feel it coming, I make sure to warn my husband and my daughter, and I apologize in advance if I act snippy or impatient towards them. I remind my family that it's not their fault, and I remind them that I'm struggling.

My periods weren’t always this bad. But ever since my second child was born, my menstrual cycle has felt less like an inconvenience and more like a brutal, life-altering train wreck that I can’t look away from. I have terrible postpartum periods, and they completely get in the way of my normal day-to-day functioning.

I started feeling this way shortly after my son was born, but it wasn't until he turned 2 that I tried to get a handle on my symptoms. I realized I could no longer blame my mood swings on being postpartum any more, so I started researching ways to alleviate my symptoms. Many women swore by birth control, but since I had been on birth control and experienced negative side effects, like weight gain and moodiness, I decided to seek out other remedies. I exercised daily. I cut alcohol and caffeine. I started using a natural progesterone cream that my doctor recommended. But it didn't help, and I ended up with a wicked rash.

As women move into their mid- to-late 30s, their hormones change even more, which can also make their periods longer, heavier, and just downright miserable.

At times, I wondered if I felt worse simply because my life is more stressful now than it was before I had kids. But when I went to my doctor, she diagnosed me with Premenstrual Dysphoric Disorder, which is defined as a severe, sometimes debilitating form of PMS. In addition to causing painful cramps, PMDD is also linked to sleeplessness, anxiety, and feelings of utter hopelessness, which is basically how I feel for a week or so every month.

My doctor confirmed my suspicion that many women report that their periods get worse after they have kids. She explained that while hormones shift and change during pregnancy, they can have lasting effects on your body long after the postpartum period. As women move into their mid- to-late 30s, their hormones change even more, which can also make their periods longer, heavier, and just downright miserable.

Whatever the cause of my PMDD, it seriously disrupts my life. And since no one in my family truly understands how this misery feels, I recently joined a private online support group that I found via Facebook, where I can discuss how I'm feeling with women who've had similar experiences. On Facebook, we commiserate about what we refer to as our “hell week."

Sometimes, I feel like the worst mother on the planet.

The group members understand how defeated I feel by my PMDD. They also understand that no matter what I do to prevent the feelings of sadness and anger that come before my period, these feelings come anyway. Even though I can usually hide these feelings from my children, my PMDD deeply affects my own mental health and makes me feel like the worst mother on the planet.

My son will be 3 next month, and I’m not sure I’m much closer to finding the golden ticket cure for my PMDD than when I started. In all honesty, I’m still struggling, though some months are better than others. Still, I won’t give up. I won’t stop trying to find a solution, because my family and my mental health are totally worth fighting for.

More Like This
Model Hunter McGrady On Being 6 Months Postpartum In Latest SI Swimsuit Edition
Breaking Down The Different Types Of Postpartum Infections
Everything You Need To Know About Postpartum Blood Clots
Ashley Graham On The “Fun, Organized Chaos” Of Raising Twins