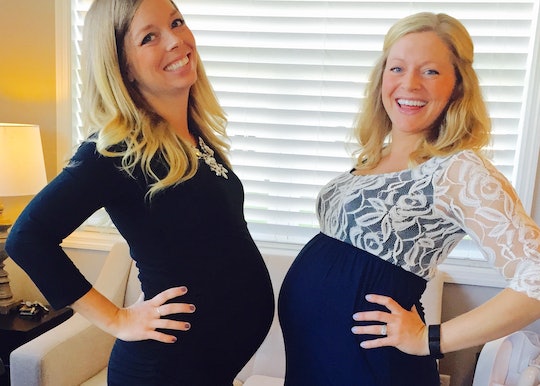 I found out I was pregnant with my second child and we were ready to share the news with my closest circle of friends and family. After FaceTiming my parents, who lived across the country, and calling my sister, who lived across town, I sent a text message to my childhood best friend. A simple baby head emoji would suffice — we truly are in the age of brevity and quick communication, aren't we? I waited to see if she would get what I was hinting at. A few minutes later I got a text back from her. She replied with her own baby head emoji. Plot twist!

I immediately called her.

“Um… you get the baby emoji means I am pregnant right?

Turns out, we were exactly seven days apart. Looks like we had an unexpected pregnancy pact on our hands, except for instead of rebellious, overly-sexual teens we were 30-year-olds who liked red wine and naps. Or at least we did, before parenting forced us into Veggie Straws and Moana.

The girl who I obsessed with over growing Tamagotchis all fourth-grade year with would now be my partner in crime for the next nine months as we grew a human being together. Well, separate, but together. You get it.

So, we began checking in frequently out of pregnancy solidarity, and nothing was off limits. I would text her as I was flattened on the couch in exhaustion while my husband was out of town and my toddler was using my body as a trampoline. She texted me when she felt like she wanted to murder every living creature in sight for no reason other than because of super fun hormones. Or when we were both dying internally from heartburn. Or pregnancy gas. Or just… so many feelings. All the feelings, all the time. Wah. Emotions!

She had become my “pregnancy person,” and I became hers, and I absolutely loved it.

Because being pregnant, at least for me, is not a time I find myself “basking in a glow.” Sorry to all you doula-types out there. I wish I was more like you, truly, but everyone is different. While grateful for the little bean growing inside of me, I just don’t like being pregnant. But having someone I could call on who literally understood exactly how I was feeling — trimester by trimester — helped a lot. I encouraged her on her bad days, she did on mine. We made jokes about our pains and aches and hormones and growing bellies because laughter sometimes is the only remedy when there is nothing you can do to change your situation. We cheered each other on during this ultimate, extreme race.

So when she and her husband decided to come down to Florida to visit us for spring break, I was thrilled. We were both five months pregnant, both of our daughters were 2 and wild, and we were going to spend the week not drinking but wishing we were and laying on the beach while our husbands were obligated to chase the girls around and bury them in the sand just for a moment of stillness.

But life likes to throw curveballs, doesn’t it? The day before they were to arrive we were at our 20-week anatomy scan. My husband and I were excited and looking forward to watching our little dude jump around on the screen for an hour.

But when the ultrasound tech got quiet and brought the doctor in, and the doctor kept scanning and scanning with a look of concern and confusion on her face, I knew something wasn’t right. I asked her if something was wrong, and immediately started bawling when she didn’t answer me right away. She finally told me something was off about my baby's heart. She didn’t know exactly what, but something was just… wrong. The words possible heart surgery, down syndrome, trisomy 18, and needing genetic testing were all I could hear as I laid on that exam table and sobbed every single tear I could possibly cry.

There, in my house, was my pregnancy person waiting for me. We hugged with our matching bumps and I was beyond grateful to have here there, for that long, terrible two weeks where there was nothing to do but worry, wait, and try not to Google anything.

The doctor booked us an appointment to see a pediatric cardiologist the very next day, at the exact time our friends were supposed to show up. I left a key out under the mat so they could let themselves into the house.

That day I laid terrified on the exam table, and they did a two-hour ultrasound of my guy’s heart, which at the time was the size of a raisin. Image after image taken. My husband and I tried to analyze every expression on the ultrasound tech’s face as she scanned, glancing nervously at each other when we saw something weird on the screen, even though we had no idea what we were even looking at.

The cardiologist found out some things, but we left that day with more questions than answers. We would just have to wait and be patient until the next scan in two weeks to see how things were progressing.

So, we drove home from that appointment, shell-shocked and even more confused than when we went in. There, in my house, was my pregnancy person waiting for me. We hugged with our matching bumps and I was beyond grateful to have here there, for that long, terrible two weeks where there was nothing to do but worry, wait, and try not to Google anything.

That week we chased around our girls, laid out on the beach, went to the zoo and to the park and out to eat for fish platters with sweet potato fries. We talked and laughed and drank chamomile tea and watched The Office because there ain’t nothing a little Michael Scott can’t fix. God knew I needed her there during that exact time — the perfect distraction and way to pass the days until we would go back to our next appointment. Someone who silently understood the sheer terror my husband and I felt and this huge unknown sitting before us, perhaps more than anyone else could in that moment.

Months and what seemed like a million more long ultrasound appointments passed. My friend and I ended up having our babies exactly one week apart — the ridiculousness is not beyond us. She had her girl, I had my boy, and yes, we are already planning their wedding.

Now, one year and 10 trips to the pediatric cardiologist later, my little guy has finally been given the all clear. Finally, we can exhale. Finally, we were assured there will be no surgery. He will be able to play sports and run and just be a kid, which is all any parent can ask. He is going to be OK. Being able to type that sentence now still feels unreal. Things are growing as they should, holes have closed, and veins are pumping normally. Our own little mini miracle. He is thriving, hilarious, and loves yanking his big sister’s curly hair, chewing everything humanly possible and aggressively pulling my face into his for a sloppy wet baby kiss.

My pregnancy person has now turned into my parenting person. We still text about everything baby related. Breastfeeding and sleep training and how our girls are handing their new siblings. Anytime I now feel the overwhelm of the infancy stage, I text. When we hit that awful three-month sleep regression, we text. First tooth, sleep suits, feeding baby food — all of it. We talk, we commiserate, we cheer each other on.

But besides all the drama that is unavoidable with infants, do you know what we else discuss? How much we love our babies. Despite the lack of sleep and near mental breakdowns of now parenting two little humans, we are both so in love with these babies. These tiny, perfect gifts that we both were lucky enough to have, together.

More Like This
I Found Gender Euphoria In My Second Pregnancy
When Does Pregnancy Horniness Kick In?
Barre Could Be The Low-Impact Prenatal Workout You Need
Can You Bowl While Pregnant? Experts Weigh In