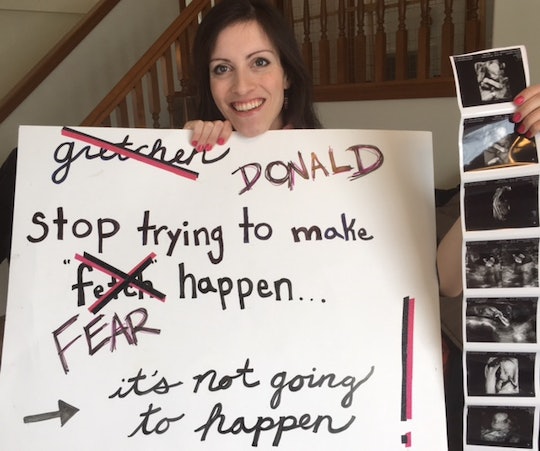 My Pregnancy Is The Reason I Marched On Washington

I’ve never been on a march before, but I’m marching in Washington State today in solidarity with the Women’s March. I’ve never held a protest sign, but I made one just this week. I'm also roughly five months pregnant.

The closest I’ve come to real, tangible political action was haphazardly making some campaign donations, and a spontaneous moment I shared with protesters on a Spokane street corner this past spring. I had the distinct pleasure of booing the motorcade carrying our now-president of the United States.

Everything changed in November, though. A week after the election, I found myself taking my 2-year-old son to a rainy vigil in Spokane where, together, we held a battery-operated candle in support of peace. I knew my son wouldn’t understand the event, or what we were doing and why we were doing it, but I took him so that, someday, I can tell him he was there. In fact, both my kids were there, in a way. My son was next to me, and the baby I’m carrying, due in June, was already forming inside me; already making me tired and emotional and nauseous. (At least, I think she was. It may have just been the election results.)‌ ‌

I can’t say for certain that I’d be marching today if this second child wasn’t on the way. I mean, it’s certainly possible, because I support the mission and values of the march regardless. It’s also possible that my family and I would go downtown to watch even if I wasn't pregnant, or that my spouse and I would tell our son about it and show him a clip from the news, knowing that his attention span wouldn’t allow for much more than that. Or perhaps we’d treat it like any other winter Saturday, letting it pass easily by enjoying pancakes and running errands and watching cartoons and building pillow forts. But something about having a second baby coming led me to the conclusion that I should attend. I needed to attend. I think it has to do with the fact that, though I have a child who already knows me and who already loves me whether or not I participate in a march, I also have someone coming into my life who doesn’t yet know me.

This baby might know what it feels like to share my body, but she’s never looked into my eyes, never let me comfort her. She’s never fallen asleep on my chest, she’s never run up to me with open arms. She’s never called out for me in the middle of the night, and I’ve never wiped her chin, zipped up her coat, or applied a Band-Aid to one of her trembling fingers. She doesn’t look at my with the same wide-eyed admiration her big brother sometimes does. Of course, I don’t know much about her, either. I know she makes me want more sweets than her brother did, and that she’s tougher on my sleep than her brother was at this stage. She’s the reason I could only fit into the jacket part of my pantsuit last November. She likes to kick and dance shortly after dinner, and she doesn’t like it when I lay flat on my back. That’s about all I’ve got so far, but that’s enough for me.

When it comes time for them to start understanding what things like social justice and human rights and sexism are, I want them to know how their mom not only feels, but how she's responded.

The way I see it, I owe it to both my kids to be not only the best mom I can be but the best person I can be, before and after they have an awareness of it. And, having another child in the picture reminds me that I can’t get lazy, and that I don’t want either of their opinions of me to rely only on what I share with them after they’re born. Really, it wouldn’t be fair since my son’s biased —my advanced snuggling skills, the mean PB&J I can make, and my ability to hunt imaginary octopi in our living room are more than enough to impress him. I mean, he’s 2. It would be easy to bank on his adoration and put my feet up this weekend, but it’s more important that I remember to be the person I want him and his sister to know and respect years from now, too.

Admittedly, what their mom did on a Saturday afternoon in January 2017 is probably not going to be cherished family lore passed down from my generation to theirs, and from theirs to the next. Nor is my participation something that absolves me from other responsibilities, or something that I intend to fiercely wield as any sort of indicator or proof of who their mom is or isn't. But, when it comes time for them to start understanding what things like social justice and human rights and sexism are, I want them to know how their mom not only feels, but how she's responded.

If I made it look impossible to care about current events, or if I blew off opportunities to stand up and use my voice, or if I told my kids that nothing outside the walls of our house mattered because they were safe at home with me, what kind of message would that send? I don't want to know, to be honest.

Of course, I don't think parenting begins or ends with the relationships I have with my kids. I believe I have a responsibility to respond and react accordingly to what's happening outside of our family too, and to make sure that my kids recognize that their mom is a whole and complete person, and a member of society (despite what the new administration may believe). Yes, my kids are my top priorities, but I'm still able to make time to care about other things too, like politics and pop culture, feminism, other people, my career, french fries, and thick scarves (but not necessarily in that order). It's important to me that they understand this because, to put it simply, I want my kids to grow up and be able to do the same. No matter what their lives brings them, I want them to remember they are people first, whole and complete and happy, fulfilled and validated by their own interests and hobbies as much as the things they enjoy doing (or not doing) with others. If I made it look impossible to care about current events, or if I blew off opportunities to stand up and use my voice, or if I told my kids that nothing outside the walls of our house mattered because they were safe at home with me, what kind of message would that send? I don't want to know, to be honest.

As a married, straight, white woman, many of the new policies and norms promised by our the new administration may not even affect my family, and that is a privilege not lost on me. But that’s no excuse to sit back and watch dangerous change happen without ever doing anything to try and prevent it. If anything, it’s even more of a reason to participate in movements supporting equality, tolerance, and human rights.

I suspect that someday, we’ll all be telling our children about this period in our nation’s history. Maybe I’ll tell mine a candid version of what it was like to sit up in bed and weep when the 2016 election was called late at night. They might hear what it was like to slowly lose even more hope in the weeks that followed, and what it was like to ultimately watch our country inaugurate one of the least-liked presidents of recent years to date. They might hear about the questions that were posed, the events that were organized, and the ways we used our voices until they wore out. I might tell them how I decided on what signs to make and carry at the march, and why I went with movie references and an attempt at humor. I may even someday show them The Princess Bride and Mean Girls and let them see those references themselves. Actually, wait, scratch that — showing them The Princess Bride and Mean Girls isn’t a maybe, it’s a definite. Either way, it’ll be a while before these stories are told, mainly because we’re all still living them.

But I look forward to the day when both my kids understand that their mom got involved. She showed up, and she wasn’t alone. In 2017, their mom was one of the thousands and thousands of women who stood up for what’s right, and stood up against the inequality, hate, and ignorance the new POTUS represents to so many of us. Hopefully by then, we’ll have plenty to show for our efforts. In the meantime, I’ve all but given up on the idea that Trump himself will understand — but knowing that our kids someday will? It’s a start.

More Like This
New Study Finds Moms Who Earn More Than Their Husbands Also Do More Housework
20 Moms Reveal Their First Pregnancy Craving
All Your Questions About Getting Pregnant After A Tummy Tuck Answered
A C-Section Actually Doesn't Take As Long As You Think, According To Experts