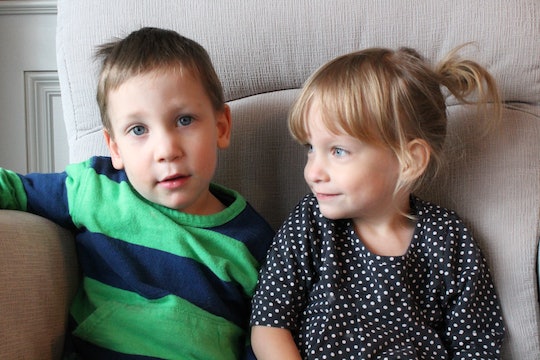 My Preschoolers Aren't Potty Trained Yet & I'm Majorly Stressed About It

When I went to pick my kids up from daycare today, I braced myself for what I knew I'd inevitably find in my son's cubby: bags upon bags of soiled clothes, just like I find everyday. We've been sending him to daycare in underwear instead of diapers for about a month now, under assurances from his teachers that he'd be able to pick up potty training quickly given his age even though we didn't particularly think he was ready (we'd been trying, without much success, to potty train him at home for a while, after all). But we were also painfully aware that we were under a deadline — my twins are set to start junior kindergarten in September — so it felt like we had little choice. While I'd hoped that his teachers would be right, that maybe he just needed to be pushed a bit more, so far, it seems like each day he's having more accidents, not fewer. His sister's diagnosis of mild cerebral palsy means that her school is willing to accommodate her need to remain in diapers, but by now everyone is expecting my son to be able to go to on the toilet by himself. The difficult reality is that my preschoolers aren't potty trained, and I feel terrible about it.

Honestly, for a long while I was super laid back about not pushing potty training, and I had a few reasons for making that decision. The main reason was that my twins were born extremely premature at 25 weeks in December of 2012, and that made the conversation about when to send them to Pre-K particularly complicated. Where we live, children begin full-day kindergarten the year they turn 4 years old. Madeleine and Reid will be turning 4 in December of this year, which already would make them some of (if not the) the youngest kids in the class — but thanks to their prematurity, they are really even younger. Even though they were born in December, they weren't meant to be born until the end of March.

Although many people often assume premature babies are just small infants who eventually catch up, the reality is, extremely low birth-weight children like Madeleine and Reid have their own unique struggles and risk factors. My daughter's cerebral palsy, for one, is something that is relatively common among premature babies born before 28 weeks. My son got lucky in that regard — he has no lingering medical issues or disabilities — but that doesn't mean he's just like every other full-term kid.

The fact that my kids aren't potty trained isn't exactly something I feel proud to admit to most people.

Reid has, for whatever reason, always had his own schedule. Even back in the NICU, before he was even supposed to be born, we could see this about him. Preemies like Madeleine and Reid often need a lot of assistance to breathe for a long while after they are born, because their lungs are so underdeveloped. Both Reid and Madeleine were on a series of different mechanical ventilators and other machines at the beginning, which helped keep them alive as they grew and got stronger. Despite being the more medically-fragile of the two, it was actually Madeleine who was able to wean off breathing assistance first. Reid, on the other hand, didn't seem to be able to tolerate anything less than a high level of breathing support for what felt like eternity — he just didn't seem to want to breathe on his own — and that scared us terribly.

For the longest time, we worried about Reid. No one seemed to know why it was taking him so long to come off of the ventilator. There wasn't any particular reason why after all, it was just what was happening. And then, one day, he decided he was ready. Just like that.

Each major developmental milestone seemed to come late to Reid for no good reason whatsoever. He could do it, was capable of doing it, but he just chose not to.

I remember thinking even back then that this was one of my first big lessons about what it meant to be Reid's mother. I was still getting to know my impossibly tiny son, who he was, his likes and dislikes, but it seemed clear that he had his own distinct timetable. Even then I knew he was different from his sister — his stubborn, warrior sister — and that he was a much gentler soul, slower, in no particular rush, happy mostly to just cuddle and take things in stride. He had no reason to be that way, no medical issue slowing him down (other than, obviously, his marked prematurity), but he just needed to take his time. And as his mother, it was my responsibility to respect that.

I guess I didn't really learn that lesson as well as I thought I had though, because I had to learn it over again and again as Reid grew. Each major developmental milestone seemed to come late to Reid for no good reason whatsoever. He could do it, was capable of doing it, but he just chose not to. We waited and waited for him to show interest in walking, or to turn into a babbling, chatty child the way his sister had. Eventually, I even got so worried about his radio silence that we had regular discussions with a speech language pathologist we'd been connected with after the twins came home, every time leaving with the same message: There's no reason why he isn't talking. He just needs time.

What I should know, now, based on everything Reid himself has taught me over the past 3-and-half years, is that the fact that he isn't ready to use the toilet independently most likely isn't a sign that there's a problem, but that we just aren't respecting his timeline. And yet, I've started to push him anyway, trying something called the Three-Day Potty Training Method (to little success, surprise, surprise), reading him all sort of books about potties, having endless conversations about not peeing in his fancy big boy underwear, even bribing him with gummy bears when I'm really desperate. In my heart, I know none of it will work. Until he's ready, I can't force him to do anything. But I hear the voices of his daycare teachers play in my mind — "he has to be potty trained," "they won't change his diapers in kindergarten" — and instantly I feel like a total failure for having 3-and-half year old who has trouble keeping his underwear dry.

Perhaps the real issue here is not that I'm failing my son by not potty training him, but that I'm failing him by not advocating for him, for not standing up for the fact that he has every right to listen to his own body and to not feel pressured into trying to meet a milestone he's clearly not ready for.

The fact that my kids aren't potty trained isn't exactly something I feel proud to admit to most people, and I'm assuming it's probably the same way for most moms whose older children aren't potty trained. I've never even heard anyone else willingly talk about it, though surely my children can't be the only ones are still in diapers and Pull-Ups. But yet another conversation with Reid's daycare teachers about how many accidents he's having, (as though I'd totally dropped the ball as his mother) made me consider that perhaps the real issue here is not that I'm failing my son by not potty training him, but that I'm failing him by not advocating for him, for not standing up for the fact that he has every right to listen to his own body and to not feel pressured into trying to meet a milestone he's clearly not ready for.

Even writing those words feels hugely shame-ridden — what kind of a mother makes excuses for not potty training her child? Perhaps I am wrong, after all, maybe I should be pushing harder, or maybe I should have started pushing harder a long time ago, and it's my own damn fault that we are in this predicament now. But, knowing Reid, I'm pretty sure one day soon he's just going to let us know that he's ready, just like every other time, and then we'll look back once again and wonder why we were so worried. The only difference, I have to imagine, is that he'll either arrive at that point still wearing diapers, or bringing home an awful lot more soiled clothing. And perhaps that really is the only part about this whole situation I actually have any control over after all.